Increasing levels of water stress are pitting the demands of business against individuals and country against country. How can we relieve water stress and protect the human right to water? 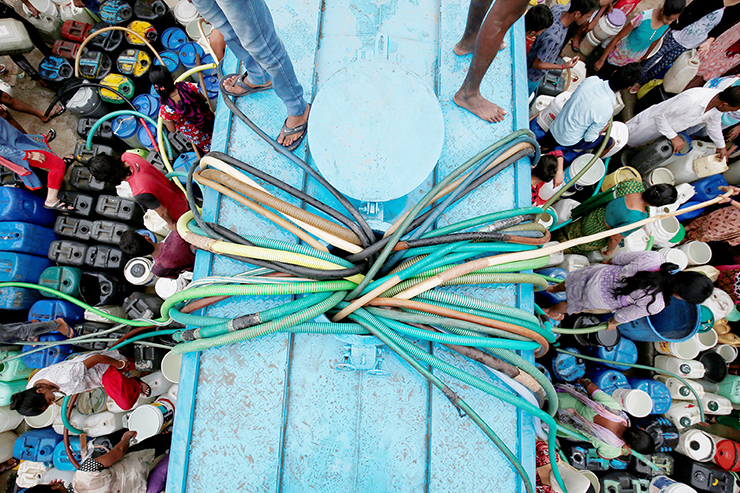 Increasing levels of water stress are pitting the demands of business against individuals and country against country. How can we relieve water stress and protect the human right to water?

Water is one of our most precious resources. It is universal, crosses borders and nourishes all life. Water is a human right – we cannot live without it. Yet with global population growth, environmental degradation, climate change impacts, changing lifestyles and greater urbanisation, water risks becoming more and more scarce as demand for it increases.

According to the United Nations World Water Development Report launched in March 2019, over two billion people live in countries experiencing high water stress. By 2050, global water demand is expected to increase by 20 to 30 per cent, while supply will dwindle alarmingly.

Water scarcity is a complex issue for many reasons. An increase in the number of people on our planet and sweeping economic development is making water use grow twice as fast as compared to the last century. As the availability of fresh water decreases, we also see an increase in water demand from the agricultural, industrial and energy sectors.

This struggle for balance is one of our greatest challenges. With this in mind, the international community committed to a specific Sustainable Development Goal (SDG) on water. SDG 6 aims to ensure the availability and sustainable management of water and sanitation for all. It underlines the urgency to better manage this key natural resource to reach the aspirations of the 2030 Agenda for Sustainable Development.

Climate change isn’t making things any better. For every 1°C rise in global temperature, it is expected that 500 million people will face a 20 per cent decrease in the availability of freshwater resources. Dry areas tend to become drier, droughts tend to become more recurrent and severe, and coastal areas are more affected by seawater intrusion due to rising sea level. More frequent and intense extreme weather events have major impacts on water supply and food security, especially in already vulnerable rural areas.

Cyclone Idai, which recently struck Mozambique, Malawi and Zimbabwe, affecting over 2.9 million people, is an example. The fury of these events can leave thousands of people without homes, decimating their crops and cutting off access to safe water.

Competition for water is a strong social stressor and can be a major driver of migration. An average of 25.3 million people worldwide are displaced each year by sudden disasters.

Water scarcity also threatens food security and nutrition, leading to conflicts and jeopardising livelihoods and ecosystems. Already, millions of family farmers in developing countries suffer from lack of access to fresh water. Agriculture is by far the most affected sector in periods of drought, leading to severe crop losses and reduced production that hit farmers and the rural population hardest. About 84 per cent of the economic impact of drought falls on the sector. Ensuring water security for millions of rural residents is vital to achieve the 2030 Agenda. Collectively, the world’s smallholder farmers feed the world but individually face repeated risks of food insecurity and malnutrition.

The Food and Agriculture Organization of the United Nations (FAO) works with countries and partners to create stronger and more resilient rural communities, helping them to combat water scarcity and expand livelihood opportunities. Leaving no one behind requires increased attention to sustainable water management in agriculture, increased investment in water infrastructure and availability of safe drinkable water for all. It calls for actions such as water harvesting for irrigation, improved advisory services for water management, and developing drought preparedness plans.

Good decision-making relies on reliable and timely information. Since 1960, FAO has been collecting, analysing and providing global information on water resources and agricultural water management through AQUASTAT, its global information system. AQUASTAT draws on national capacities and expertise with an emphasis on Africa, the Middle East, countries of the former Soviet Union, Asia, and Latin America and the Caribbean. It plays a central role in monitoring SDG 6 and, in particular, indicators on water stress and water use efficiency.

But the pendulum swings both ways: agriculture suffers from water scarcity but is also a cause. Irrigated farming accounts for around 70 per cent of freshwater withdrawals to produce approximately 40 per cent of the world’s food on only 20 per cent of global cropland.

Against this background, irrigated agriculture will remain important in the future, when we have to produce around 50 per cent more food by 2050 to feed a greater population. Therefore, it is essential for food production systems to use less water, and use it more efficiently.

FAO, acutely aware of these challenges, promotes actions to produce more with less water and reduce losses in agriculture. The positive effects of promoting water use efficiency, water recycling and rainwater harvesting – combined with measures like selection of drought and salinity-resistant species and sustainable soil management – can lead to wider benefits. They can help tackle extreme poverty, hunger and malnutrition, and climate change.

For instance, our ‘one million cisterns for the Sahel’ programme focuses on vulnerable rural communities in arid and semi-arid regions of five countries affected by climate shocks. Inspired by a similar programme implemented in Brazil, this initiative aims to give access to safe drinking water to millions of people across the Sahel. The idea is to improve families’ lives on a number of levels: to increase what they grow for nutrition and for income, to improve health and, ultimately, to build the resilience of millions of families, especially women.

My home country, Cabo Verde, suffers from a dry and unpredictable climate and, like many small island developing states, limited access to fresh water. This exposes us to significant risks for the primary sector, especially agriculture. But despite the country’s arid climate, by adopting innovative technologies such as desalination, solar power energy, reuse of waste water for agriculture and even fog harvesting, 90 per cent of the population has access to potable water. This is an impressive figure.

Actions and strategies must address water use, agricultural production, food security and climate change in an integrated manner. The FAO-led Global Framework on Water Scarcity in Agriculture (WASAG), launched during the UN Climate Change Conference in Marrakech in 2016, is bringing together leaders in water and agriculture to design such strategies. Last March, 47 countries adopted the Praia Commitment. This is aimed at promoting sustainable water management as a driver of development, maximising synergies across the 2030 Agenda. They are designed to support farmers, providing improved access to financing, innovative technologies and sound water management practices.

While this kind of political leadership is crucial, there is much more that can be done, from modernising irrigation schemes to improving water supply systems to supporting water data and information systems. The tools are all at our disposal. We now need to take up the challenge, raise awareness and recognise that water is limited. We all need to use it wisely to make every drop count.