The new UN Secretary-General, to be appointed in 2016, will play a pivotal role in how the organisation tackles global challenges. With so much at stake, how can the UN ensure it gets the right person for the job? 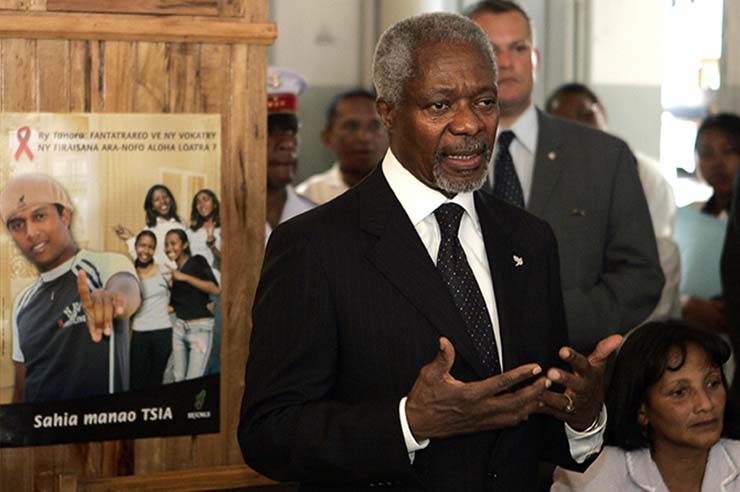 Former UN Secretary-General Kofi Annan addresses patients and medical personnel at a centre for HIV/AIDS in Madagascar. Kofi Annan’s initiatives on HIV/AIDS demonstrate how an effective Secretary-General can broaden the scope of the UN beyond the priorities of the P5  © Getty Images/Marco Longari

The new UN Secretary-General, to be appointed in 2016, will play a pivotal role in how the organisation tackles global challenges. With so much at stake, how can the UN ensure it gets the right person for the job?

This is a crucial moment for the United Nations. In September 2015 world leaders met at the UN in New York to launch the Sustainable Development Goals (SDGs) and focus world attention – and financing – on addressing these critical challenges. And in December 2015 world leaders met in Paris to forge a new, more effective and durable climate agreement. These are opportunities for the UN and its member states to address global problems. But 2015 was also a time of reflection for the UN: it celebrated its 70th birthday on 24 October and is now looking for a new Secretary-General to carry forward these goals and identify the UN’s role in this changing global context.

Reforming the UN has long been discussed. Its funds, programmes and agencies are often criticised for being too slow and mired in bureaucracy. The UN Security Council is often blocked by disagreement within the Permanent Five, or P5 (China, France, Russia, the UK and USA), each of whom have an effective veto. Member states burden the UN with new mandates every year, but seldom give it adequate resources to perform these additional tasks. The selection of the new Secretary-General, which will take place over the coming months, is an opportunity to strengthen the capacity of the UN to deliver on the SDGs.

However, the current selection process for the Secretary-General is surprisingly opaque and is closely controlled by the P5. In the past, the Security Council has selected a single candidate and recommended them to the UN General Assembly. There has been little opportunity for most states to interact with the candidates or influence who should be selected. On this basis, we would expect the General Assembly to approve a compromise candidate who has emerged from P5 negotiations.

Change may be in the offing. On 11 September 2015, a resolution was issued by the General Assembly urging reform of the current selection process. This was partly the result of months of pressure by UNA-UK and  other civil-society organisations acting through the 1 for 7 Billion campaign.1 Member states have now agreed to new selection criteria for the position, including: “proven leadership and managerial abilities, extensive experience in international relations, and strong diplomatic, communication and multilingual skills.”

They also called for informal dialogues or meetings with candidates in the General Assembly and encouraged states to present female candidates. At least three may be in the running: Irina Bokova from the UN Educational, Scientific and Cultural Organization; Helen Clark from the UN Development Programme; and Kristalina Georgieva from the European Commission. In addition, the resolution urged the Presidents of the General Assembly and the Security Council to issue a joint letter to formally start the process and to circulate information about all candidates on an ongoing basis. This is now underway.

Beyond selection
Further pressure will be needed to ensure the UN is led in a way that will deliver on the SDGs. A new report issued by the World Economic Forum (WEF) and the Blavatnik School of Government at Oxford University highlights lessons about effective leadership in international organisations. Drawing on practices at 11 organisations, the report underscores how seldom the leadership search is conducted on the basis of specific, relevant competencies, tested against clearly defined criteria. More often, backroom deals are made among governments. Yet the pressure on the UN is part of a new trend.

Just last year, the African Development Bank (AfDB) held competitive elections for its President. All candidates were profiled on the AfDB website and nomination forms and voting procedures were made publicly available online. At the end of 2015, a civil-society organisation, the International Council of Voluntary Agencies, sought to solicit interviews and profile candidates for the post of UN High Commissioner for Refugees.2 The demands of the 1 for 7 Billion campaign and the recent UN General Assembly resolution are positive steps towards openness and transparency.

The WEF-Blavatnik report goes beyond the selection process to highlight other ways to ensure (and test) ongoing effective leadership. Annual evaluations of performance are important, as are clear strategic goals and operational plans set by the leadership. For instance, the Managing Director of the International Monetary Fund has been evaluated annually by its board since 2009, based on agreed performance objectives. Interestingly, the Managing Director also assesses the executive board’s performance.

In 2008, the current UN Secretary-General Ban Ki-moon established senior managers’ compacts for many senior UN officials. These compacts, or agreements, outline the roles of UN department heads, who must report on how they are spending their budgets in relation to programme objectives. UN senior officials are also reviewed on how well they promote gender diversity. It would be timely to ensure that the next Secretary-General is also held accountable for his or her performance.

Another key element of good leadership lies in agenda-setting and innovating. An effective international leader can frame and propose actions that lie beyond any individual government’s interests. For example, Dag Hammarskjöld expanded the Secretary-General’s ‘good offices’ function. Kofi Annan brokered a groundbreaking deal with pharmaceutical companies to widen access to HIV/AIDS treatment. An effective Secretary-General can advocate for issues and situations that are not P5 priorities, including using his or her power to bring any matter to the Security Council that threatens international peace or security.

Effective heads of international organisations can seize and shape the capacity of their agency to deliver by brokering new resources for the organisation and through engendering better staff recruitment, promotion and morale. The new Secretary-General can appoint (or not) effective and qualified personnel to key UN positions, and urge and support those leaders to apply clear meritocratic criteria in all appointments and promotions (and resist political pressures to do otherwise).

He or she could insist that member states wishing to add yet more mandates to the UN also remove an equal number of those that already exist. And in brokering new resources for the organisation, an effective Secretary-General will need to balance short-term infusions of cash for ‘special projects’ (and sometimes special interests) against his or her duty to strengthen the capacity of the UN to serve all its members.

The UN needs better leadership than ever before. In every part of the world, people are at risk from challenges that no government can resolve on its own. Citizens can be struck by infectious diseases such as avian flu, Zika and Ebola that require global cooperation to contain. Livelihoods have collapsed due to financial crises that began in other continents. Climate change will flood and render uninhabitable some parts of the world. Conflicts, such as those raging in Syria and Yemen, will require global negotiations to be resolved and, in the meantime, will continue to force millions into refugee camps and into unsafe boats crossing the Mediterranean.

In a positive vein, leaders across the world have recognised many of these challenges and their own duty to deliver to people across the world on the 17 SDGs. The UN will need an outstanding leader to do this. He or she will need to lead an organisation created in a different context – navigating the rising power of China, Brazil, India and the continent of Africa, each wielding greater influence and creating their own new institutions, such as the new Asian Infrastructure Investment Bank.

He or she will need to innovate, and work with a host of multilateral funds and foundations involved in providing global public goods, particularly in the areas of health (e.g. Gavi, the Vaccine Alliance, The Global Fund, Clinton Health Access Initiative, Bill & Melinda Gates Foundation) and climate finance (e.g. the Green Climate Fund, The Global Environmental Facility). In all of this, a well-led UN can learn from the experiences of other international organisations, and push towards more effective, innovative cooperation among states.