The world already looks very different to the place it was when UN member states adopted the SDGs in September 2015. How can we ensure that the international community remains committed to the pledges it made? 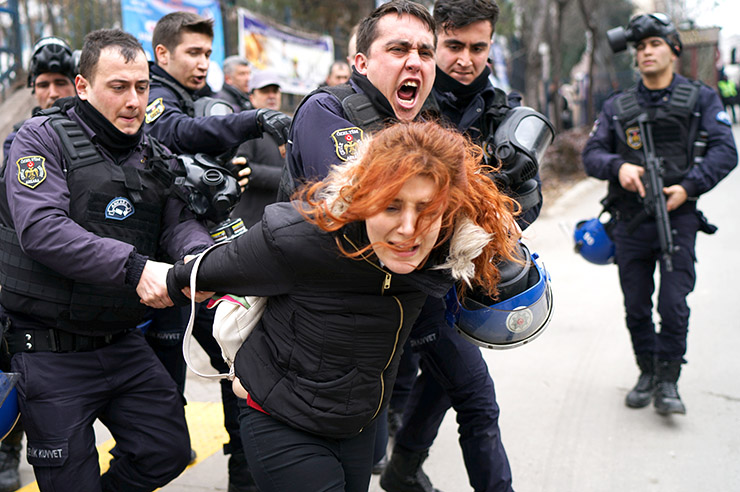 The world already looks very different to the place it was when UN member states adopted the SDGs in September 2015. How can we ensure that the international community remains committed to the pledges it made?

The UN 2030 Agenda for Sustainable Development and its companion, the Paris Agreement on climate change, aspire to nothing less than ‘transforming our world’.

The 2030 Agenda – adopted by all 193 UN member countries less than two years ago – commits to good governance and peace, overcoming hunger and poverty, and “leaving no one behind”. The Paris Agreement, pledging to take action to limit global warming to 2ºC maximum, has been ratified by more than 130 countries. These are two of the most-referenced global policy promises for economic, social and climate justice and a sustainable future for people in all parts of the world.

But these promises are increasingly at odds with the politics and economics we currently witness around the planet. Is the Sustainable Development Agenda becoming but a distant dream? Will the agenda survive? The time is now to speak out clearly against the threats, renew the commitment, and open up new avenues for progress.

The challenges
Racism and xenophobia are on the rise. In some countries, elected politicians are unashamedly sowing hate on a scale not seen since the 1930s, most obviously under President Trump in the USA, but also in many parts of Europe (such as Hungary, the Netherlands, France).

Distressingly, governments in countries like Britain are colluding or providing only weak opposition to neo-nationalism, claiming that they must preserve special relationships with their allies. Meanwhile, identity-based verbal abuse, outright oppression and violence are rearing their ugly heads across Europe as well as in countries such as Myanmar, Nigeria and Burundi, and threaten to halt and reverse progress on development that ‘leaves no one behind’.

The climate change targets of the Paris Agreement are already being challenged by fossil fuel corporations and the governments that support or condone them – although the fight back is also beginning. The promised funding for climate change mitigation is not yet forthcoming.

Meanwhile environmental activists are being arrested, persecuted, assaulted and even killed (as, for example, in Honduras and Brazil). Despite the systematic, evidence-based research of the Intergovernmental Panel on Climate Change on the destructive impact of humanity – heralding the Anthropocene era – serious science, particularly in the USA, is under threat from ‘alternative facts’.

Democracy is under threat and needs to be actively defended. Democratic deficits are widening and human rights protections are being dismantled. New authoritarianisms are emerging, barely concealed by democratic facades.

Human rights are being systematically undermined in Turkey, Hungary, the Philippines, Palestine and many other countries. De facto military juntas are being re-established in countries such as Egypt and Thailand. Several countries including India, Nepal, Ethiopia, China, Russia and others are closing down civil-society organisations.

The right to asylum is being destroyed and international cooperation is in disarray even as we experience the largest number of refugees since World War II. Governments in Europe and elsewhere are introducing exclusionary policies and failing to work together to manage the arrival of refugees with a modicum of humanity, at the same time that public hostility towards refugees is rising. The UK government recently reneged on its promise to accept (only) 3,000 unaccompanied child refugees. Meanwhile, migrants – who are keeping global interlinkages (value and care chains) going – are economically exploited and socially and culturally denigrated and excluded.

Violence is a rising tide, perpetrated both by states and by violent social actors outside of them. Violence is driving people to flee their homes and countries in increased numbers. Terrorism is a genuine threat, but provokes disproportionate responses, which undermine civil liberties. Civil wars continue year after year, and efforts at peaceful conflict resolution struggle or fail, as in Syria, Yemen and the DRC. They are entangled with the geopolitical interests of the major regional and global players, who are funding or supporting the violence.

The building of peace is pre-empted by the tendency to use massive lethal force to determine events on the ground. At the same time governments are reinforcing their military and security capabilities, increasing their military expenditures and competing for resources and strategic real estate in ways that recall the military competition of the Cold War.

In comparison, the resources devoted to constructing peace remain tiny. Although multilateral peacebuilding enjoyed a resurgence after the end of the Cold War, it is now under threat, severely underfinanced, and – as a result – finding it ever harder to deliver sustainable peace in conflict-torn places.

Inequality has risen to unprecedented levels, which flies in the face of social and economic justice. Eight men (yes, all men!) own and control as many assets as half the world’s population. Austerity politics continue, and systematically deprives societies of education, well-functioning affordable healthcare, infrastructure for energy, water, public transportation, high-tech communications and actions to reverse climate change.

Fiscal austerity, which denies governments the revenues to deliver these services, has become a creed blindly followed even in countries with budget surpluses, such as Germany. The tax reform needed to augment fiscal budgets and to redistribute incomes and wealth seems to have dropped off the agenda: some countries are even threatening to intensify tax competition, and considerable tax flight and evasion still goes on largely unchecked. The irrational and uncontrolled financial system that wrought such national and global havoc and personal distress is about to be unleashed again in the US.

Social protection, the success story of the 1990s and early 2000s, is being dismantled, notably with Brazil and India decreasing real spending on their famous cash transfer and employment guarantee schemes. Five per cent unemployment is now considered ‘full’ employment – a complete disregard of the millions of women and men, and especially those in marginal age groups, who cannot find proper and properly paid employment. They face a descent into income poverty and even hunger – quite contrary to the promise of the Sustainable Development Agenda. Children are the group worst affected by these misguided policy decisions.

An agenda for fighting back
What must happen to make sure that commitments to the Sustainable Development Agenda don’t degenerate into farce? The starting point for any fight back must be careful analysis and honest recognition of the mistakes made by progressive actors and groups, which have opened the space for the conservative wave we now face.

An active civil society can protest attempts by governments to withdraw from commitments made. Academic research can keep alive the focus on global priorities and oppose misguided perceptions. But that may not suffice to stem the rollback.

A long-term strategy is needed, mobilising a wider range of groups, national and international, drawing on the dynamics of disaffected youth movements around the world, building stronger trade union and civil-society support, emboldening political opposition and focusing on transforming the political system from the inside and the ground up.

Five priorities for action, in all countries, North and South