If so, can we fix it in time to achieve the SDGs? Or is the Decade of Action time to replace capitalism with a new economic system altogether? 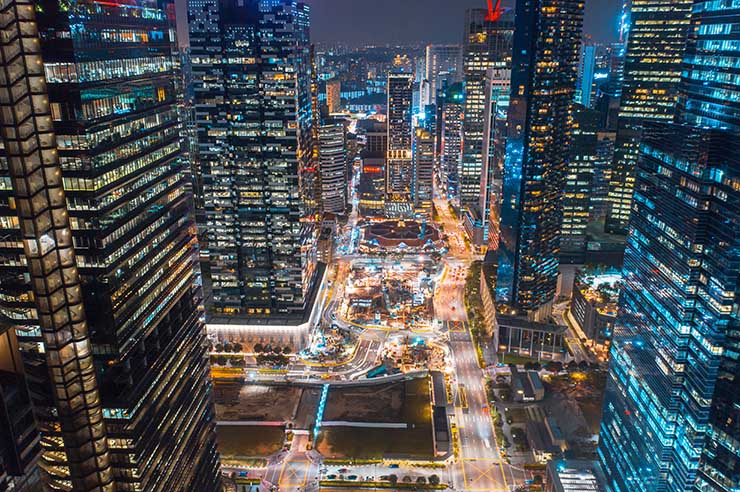 The business district of Singapore, ranked by The Heritage Foundation as the freest economy in the world. © MR Cole/Getty Images

If so, can we fix it in time to achieve the SDGs? Or is the Decade of Action time to replace capitalism with a new economic system altogether?

By Denise Hearn, Denise Hearn, adviser, writer, speaker and co-author of The Myth of Capitalism: Monopolies and the Death of Competition

By Denise Hearn Denise Hearn, adviser, writer, speaker and co-author of The Myth of Capitalism: Monopolies and the Death of Competition Claire Manuel,

Is capitalism broken? To answer this question, we must first ask what we mean by the term ‘capitalism’. Capitalism has become a moniker for a number of varied but overlapping world views. Idealogues, using the term for political exaggeration, at times make capitalism a caricature of itself. This makes it difficult to begin from first principles when unpacking various benefits and ailments of the system.

Capitalism is usually presented as an idealised version of free-market economics driven by the invisible hand of market equilibrium. Dictionary definitions of capitalism state that it is a system characterised by private ownership (including property) and competitive free markets. While this sounds good to many, as my co-author and I detail in The Myth of Capitalism: Monopolies and the Death of Competition, even in countries considered bastions of free-market capitalism (like the United States), competition has withered as more and more of the economy has come under the control of mega-firms that own entire industries.

Decades of industry consolidation from merger waves have left a significant proportion of industries more concentrated than ever. The beer, airlines, banking, kidney dialysis, defence, insurance, agriculture, pharmaceuticals and consumer goods industries, among others, have little meaningful competition.

Free markets are more a figment of imagination than a lived reality. No country in the world operates a purely free market. The Heritage Foundation, a conservative US foundation, lists the freest economies in the world each year on its Index of Economic Freedom. Hong Kong and Singapore usually vie for the top two spots. Looking more closely at this, however, reveals more nuance.

Singapore, in the top spot in 2020, is a highly state-controlled experiment in urban and economic planning. More than 80 per cent of Singaporeans live in state-owned housing through the Urban Redevelopment Authority of Singapore, and private property ownership is rare for native Singaporeans. Singapore’s sovereign wealth funds GIC and Temasek have large holdings in a number of state-owned enterprises that play a large role in the country’s economy. GIC and Temasek are two of the top 10 sovereign wealth funds in the world by assets under management.

Hong Kong is also consistently listed as one of the world’s freest economies by the Wall Street Journal. Hong Kong’s economy is controlled by a handful of oligarchical family dynasties that have duopolies in many markets: supermarkets, electricity, drug stores and real estate conglomerates. Increasing pressure from China will also restrict the freedom of markets in the country. Hong Kong is also at a 45-year high in economic inequality, with soaring housing costs driving many people to live in illegal subdivided flats. The ‘economic freedom’ meant to come from free markets applies to a subset of the population and is not widely shared.

Depth perception
So the first myth we must debunk is that capitalism provides free and competitive markets without any interference. In fact, it is only the continual interference of regulators in the form of antitrust enforcement and other sector-specific regulation that continues to ensure markets are, indeed, an even playing field.

The alternative to capitalism is often presented as socialism, and its various intellectual children such as social democracy and statism. The two systems are seen as polar opposites. However, pitting capitalism and socialism against one another is entirely the wrong debate and dichotomy.

Our physical sight is based on parallax – the phenomenon of two distinct perceptions of reality (in each eye) coming together to give us depth perception. Similarly, it is our ability to integrate different ways of seeing and seemingly oppositional viewpoints that gives us depth. As F. Scott Fitzgerald famously said: “The test of a first-rate intelligence is the ability to hold two opposed ideas in mind at the same time and still retain the ability to function.”

If we are able to see capitalism with one eye and socialism with the other, then when we open both eyes we will see a truer picture of reality: that every economy in the world is a mixture of the two intellectual traditions. When we drive our car on the highway, the market gave us the car and the state gave us the road. We can live in two realities at once.

This is important for discussions around supporting and meeting the Sustainable Development Goal (SDG) targets – because it will not be a battle of ideologies that will get us to where we need to go. It is time to move beyond dualistic language, and beyond the debates about whether capitalism alone can solve our problems. It is clear that the current system of extraction and accumulation is failing to deliver both the prosperity and the environmental protection we need to live and thrive on planet Earth together.

World views
In this vein, I would describe four predominant categories of world views regarding capitalism: believers, reformers, apostates and prophets. I use religious terminology because our adherence to capitalism is a religion of sorts: the world is built on ideas, and capitalism is one dogma with an enormously outsized influence. We have broadly adhered to beliefs about the world, ourselves and how we relate to one another that have shaped how we organise markets, trade, economic valuation and measurement of progress. These are not fixed, but rather evolutionary and flexible ideas that will continue to morph and change over time.

True believers in capitalism operate on faith that the invisible hand of the market will produce equilibrium, fair pricing and broad prosperity. They often cite as supporting evidence for their views that billions of people have been lifted out of poverty through international trade, and the large strides in global health and living standards.

Reformers believe that capitalism is not fundamentally broken, but it does require tweaks – which usually come in the form of regulation to curtail excesses or in a moral reawakening of leaders who will create more beneficent corporations and investments to spur change. Reformers advocate for stakeholder capitalism, benefit corporations, environmental, social and governance standards (ESG), sustainable investing and other tools with the aim of producing a more moral and integrated capitalism that benefits a wider set of stakeholders and the environment.

Apostates have abandoned capitalism altogether, usually advocating some form of its opposite, socialism being the most obvious example (though as we discussed above, a false dichotomy). An argument made popular by Thomas Piketty (author of Capital in the Twenty-First Century) a few years ago states that capital ‘devours the future’ – meaning that past capital acquires more power in an interest-bearing debt economy, making it easier for capital to accumulate, capitalists to become rentiers, and inequality to worsen.

Lastly, prophets are those who question the fundamental assumptions underpinning these debates and call us to return to first principles. Should we have an economic system based on interest-bearing debt when many major religions outlawed the practice for thousands of years? Is perpetual growth, as we currently understand it, an appropriate goal of economic systems? How should we measure and understand true value, and is it appropriate to place everything on Earth, including the natural world, under economic valuation to determine its worth? Prophets call us to consider alternative futures of things that have not yet been tried on a global scale.

Meeting the SDGs, in my opinion, will require the input, creativity and integration of many more prophets. It is clear that tweaks around the edges will not save us fast enough, and it is clear that capitalism as it is practised now, even in its myriad and complex forms, will not save us either if not aimed at different objectives. The SDGs give us those new objectives, and it is the imperative of our time to reorient our economic systems, whatever name we end up calling them, to these outcomes.