In Africa, achieving the Sustainable Development Goal of healthy lives and wellbeing for all will require a sustained commitment by governments to ensure adequate funding for health services 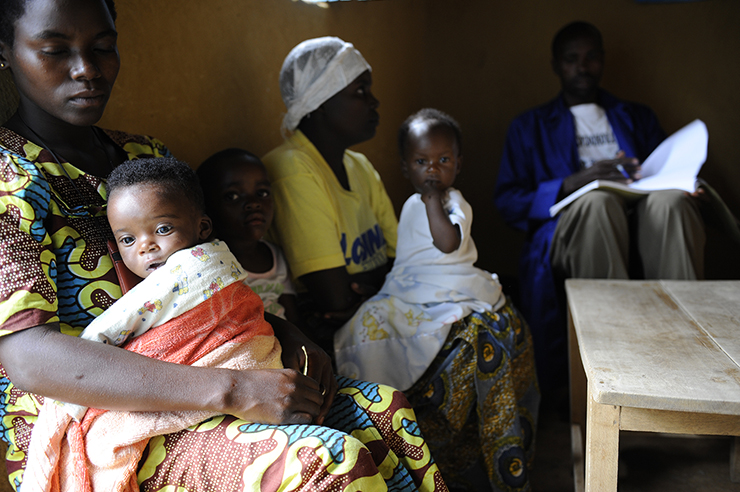 A health worker conducts rapid malaria tests at a community health centre in Rwanda, a country that has made good progress in health despite very low expenditure  © Millennium Villages Project

In Africa, achieving the Sustainable Development Goal of healthy lives and wellbeing for all will require a sustained commitment by governments to ensure adequate funding for health services

In 2000, world leaders adopted the UN Millennium Declaration and set eight Millennium Development Goals (MDGs) to be achieved by 2015. While significant progress has been made, only a few countries in the African region are on track to achieve all of the health-related MDGs. It is clear that the world must continue to build on the unfinished legacy of the MDGs if we wish to see a future free from poverty and built on human rights, equality and sustainability.

In September 2015, world leaders committed to doing just that by setting 17 Sustainable Development Goals (SDGs) and 169 targets to be achieved by 2030. Goal 3 relates to health, with the overarching aim to “ensure healthy lives and promote wellbeing for all at all ages”. This goal has nine targets: three build on and enhance the MDG targets related to communicable diseases and to maternal and child mortality; three relate to non-communicable diseases and injuries; and three are cross-cutting or focused on building systems, including universal health coverage, universal access to sexual and reproductive healthcare services, and reduced hazards from air, water and soil pollution.

The most significant obstacles to progress on the health-related MDGs in Africa were the inadequate resources available and the often unpredictable, non-sustainable nature of external donor resources that were sometimes not aligned to country priorities.1 The situation was frequently compounded by weak health systems that did not permit the desired coverage with the necessary interventions. Experience with the MDGs therefore indicates that progress on health will also be contingent on countries and partners taking effective action to ensure sustainable financing for health and for strengthening health systems.

Current level of investment
African nations and their partners have grappled with health funding over the course of the MDGs, but the progress made falls well short of their self-imposed goals.

Heads of state and governments in the African region met in 2001 in Abuja, Nigeria and pledged to allocate 15 per cent of their governments’ budget to the health sector.1 However, attainment of this target has been varied, ranging from two countries reaching it in 2004 to nine in 2009, and then fewer in later years.3

An alternative measure used to assess healthcare funding is total health expenditure (THE), which reflects the total level of funds available for health from public, private and external sources. The World Health Organization (WHO) Global Expenditure database, which shows the trends in THE for the African region between 2001 and 2013, indicates that countries increased THE per capita over the period.4

The number of countries spending over $60 per capita, as recommended by the High-Level Taskforce on Innovative International Financing for Health Systems,5 increased from nine out of 47 countries in 2001, to 21 in 2013. The average for the African region shows a progressing trend for THE per capita over the period (Figure 1). 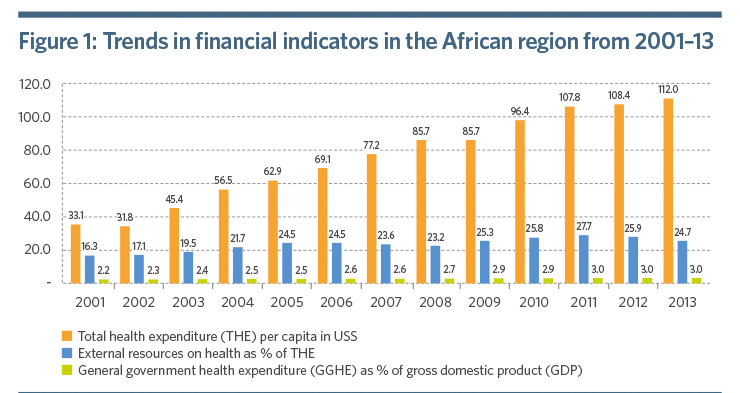 However, the proportion of THE coming from household income is critical. Inadequate government expenditure on health means increased household payments: citizens are forced to pay for or supplement their own healthcare, which means many have to choose between ill health and impoverishment.

The trend in external-resource investment as a percentage of THE between 2001 and 2013 shows a rise from 16.3 per cent in 2001 to a high of 27.7 per cent in 2011.7 (This masks some higher dependencies, however, with some countries’ external-resource investment as a percentage of THE greater than 40 per cent in 2013.8) Evidence shows that when government expenditure on health is greater than five or six per cent of GDP, fewer households have financial difficulties in paying for health services. However, the average trend of state expenditure on health as a percentage of GDP was less than three per cent during the period 2001–13 (Figure 1). It is clear that the current level of investment in African health systems is, by any measure, far too low.

Success in the health-related SDGs will depend on the generation of adequate financial resources for health and reducing the heavy reliance on OOP expenditure – a stiff challenge for many countries in the African region. Many lower-income countries face problems such as competing demands on government revenue as well as inadequate revenue generation and collection, often because of a small industrial base and large, informal sectors that are difficult to tax.

The revenue generated is also often inefficiently managed with a lack of clear policies, plans and implementation of pre-payment mechanisms. This is particularly the case for the informal sector, but also in the governance and coordination of the contributions of the multiplicity of actors.

Data
Another major challenge is simply the paucity of data and the poor information systems that make it difficult to monitor and assess progress. Monitoring progress on the health targets, including levels of investment, requires effective routine health information as well as functioning civil registration and vital statistics (CRVS) systems. As countries have widely varying contexts, a good investment in information requires a broader approach covering all the contextual and economic factors relevant to universal health coverage (UHC) and the functioning of health systems.

Incomplete essential health information has hampered effective national health planning. In sub-Saharan Africa, many countries such as Ghana, Mozambique, Tanzania and Zambia have made good progress in producing national data for hospital deaths. Seven countries have a costed plan to develop an integrated and fully functioning CRVS system. However, so far only South Africa has an internationally accepted statistics system that medically certifies and registers all deaths using the International Classification of Disease. This means that, by and large, the only means of monitoring SDG health indicators will be through estimation.

To attain UHC, health sector financing reforms in African countries need to be strengthened to achieve adequacy and equity in financing. We need innovative  and alternative mechanisms to increase public revenues and raise additional resources for health. Countries need to promote the use of pre-payment financing arrangements to expand financial protection so that no one is impoverished from catastrophic health expenditure. External donors are also playing an important role in financing health in the region.
However, this is an unpredictable source of finance and not conducive to long-term planning, so should only complement domestic resources.

As well as strengthening health systems, there is also a need to prioritise interventions that have a high population impact, such as those in maternal, newborn and child health, the prevention of non-communicable and communicable diseases, and tackling the social determinants of health. This will involve major investments in facilitating policy dialogue and strategic innovations, ideally involving all relevant sectors (including the ministries of finance, labour and social affairs) and other stakeholders, such as communities, civil society and the private sector.

What needs to be done?
Investing in health is not only about the volume of resources, but is also related to strengthening all components of health systems in a synergic manner. This means providing adequate human resources for health, community-based services and service infrastructure and systems – including decentralisation to build resilience, expanding countries’ capacity for policy and strategy development and implementation, investing in CRVS and health information systems, and critical logistics and supplies systems.

It will be important to assess and improve the way funds are raised and used for health and to track all allocated resources through institutionalised national health accounts, identifying also where waste can be eliminated and value for money be improved. In Africa, WHO will encourage all partners to join it and the member states to prioritise sustained health investments with a focus on the SDGs. With new levels of investment, accountability, leadership and partnership, the region can meet the challenges ahead to create and sustain a healthier Africa.

WHO and the SDGs
1. Investment in health information and monitoring the health SDGs
The SDGs require that WHO continues its core functions in terms of defining indicators and improving ways of measuring and reporting on progress. More investment, including in integrated mortality data collection in the context of CRVS, is an urgent priority.

The WHO’s Africa Health Observatory, a health statistics and knowledge platform, has the potential to serve as a major UHC/SDG monitoring and accountability tool. It will require a network of committed national health observatories with adequate capacity to collect, analyse and interpret real-time health data. These observatories must operate in a transparent and accountable way, and build local trust and ownership.9,10

2. Partnerships and collective action
Sound national health policies and strategic plans should be the basis for action, serving as the framework for alignment, resource allocation and implementation of all health programmes by all actors. Strengthened monitoring and evaluation frameworks for these national plans should serve as a basis for assessing health sector performance as well as the implementation of programmes, donor projects and compacts.

Partnerships need to embrace the private sector, a necessary part of developing successful health initiatives. This calls for appropriate policies and regulatory frameworks. In addition, civil society organisations are recognised partners in health development. Deliberate investments have to be made to strengthen the capacity of civil society in policy processes, ensuring their participation in established coordination structures, and their independence.

Multi-sectoral collaboration is equally important given the diverse requirements in implementing health programmes and realising outcomes. Policy dialogue should include relevant government departments such as ministries of finance, education, water and sanitation, and public service.

The Ebola epidemic highlighted that countries need to be able to coordinate local, regional and global actors, while ensuring accountability through sound legal and policy frameworks.

The role of WHO
The WHO African Regional Office will play a major part in supporting its member states to attain the SDGs. It has launched an ambitious Transformation Agenda with a proactive, responsive and results-driven approach, and will plan to muster the appropriate resources and staff to deliver on this mandate and become more accountable for UHC in the region.