The development and environment sectors have mostly operated independently of each other. What are the practical challenges of coordinating effective action that ensures development is environmentally sustainable? 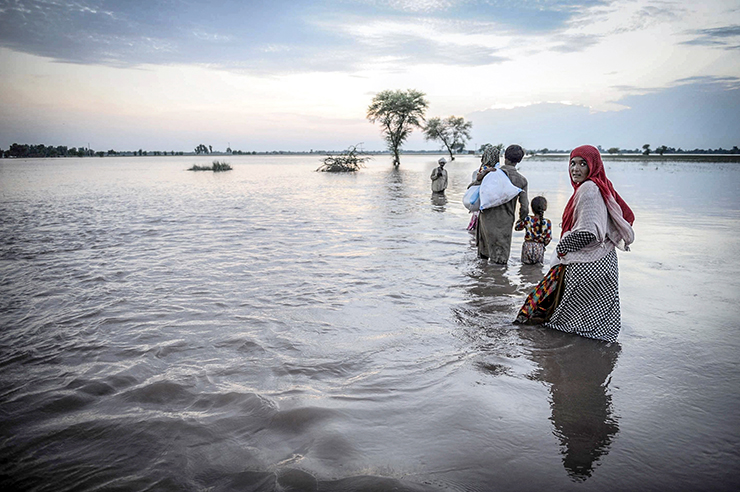 A family tries to reach safety after their home was flooded in Jalalpur Bhattian, Pakistan. The SDGs recognise the extent to which human wellbeing is dependent on environmental and climate protection.
© Metin Aktas/Anadolu Agency/Getty Images

The development and environment sectors have mostly operated independently of each other. What are the practical challenges of coordinating effective action that ensures development is environmentally sustainable?

Humans are always setting goals. Ambitious visions allow us to chart trajectories, articulate strategies and mobilise resources. Goals create global narratives that define national and local priorities and actions. We have aimed to put a man on the moon, create a common European market, eradicate smallpox and halve poverty.

At the UN Sustainable Development summit in September 2015, 193 governments agreed to 17 Sustainable Development Goals (SDGs) covering all aspects of sustainable development. At the 21st Conference of the Parties to the United Nations Framework Convention on Climate Change (COP21) in December that year, they committed to staying within 2°C of warming worldwide and to reach zero net carbon emissions in the second half of the century.

These goals are ambitious – articulating high expectations – and universal, committing all countries to their implementation. They will frame policies for the next 15 to 30 years, requiring action across the world and accountability by all actors. These goals are not entirely new. They follow on previous commitments to enhance development and to operate within environmental limits. The innovation is in combining them into one integrated agenda that seeks to match contemporary planetary challenges.

It was on this foundation that the Organisation for Economic Co-operation and Development (OECD) created international development goals in the 1990s, and supported efforts to articulate the eight Millennium Development Goals (MDGs) that were adopted in 2001. The MDGs incorporated policy areas including education and health, to gender equality, environmental sustainability and foreign aid.

Global environmental goals have been articulated through global environmental conventions since the early 1970s. As early as 1971, for example, the threat to wetlands from increased development led to the Ramsar Convention on Wetlands of International Importance. The Convention on International Trade in Endangered Species of Wild Fauna and Flora was adopted two years later.

Global environmental conventions on ozone-depleting substances, biodiversity, desertification, climate change and chemicals and waste followed. They all articulated global goals for particular issues, and created the governance mechanisms to support and review implementation.

Goals for development and goals for environmental protection took on some similar characteristics. The MDGs sought to motivate action and improve the ability of countries to deliver on core development indicators. The use of concrete targets and indicators proved an effective instrument for focusing efforts, monitoring the evolution of different strategies and prompting global political mobilisation. Environmental conventions also set up objectives, which, though more general, offered guidelines on the purpose and implementation of each agreement.

Universal and inclusive
The new SDGs bring together the development imperative of the MDGs, the environmental ambitions of the global environmental conventions and fundamental social goals. They were conceived as universal and inclusive, applicable to “all nations and peoples and for all segments of society”. They explicitly recognise that development cannot be achieved without safeguarding the ability of the planet to maintain the conditions critical to human wellbeing, and are therefore “integrated and indivisible and balance the three dimensions of sustainable development: the economic, social and environmental”.

The SDGs incorporate an environmental dimension both collectively and individually. They emphasise the connection between poverty eradication and environmental sustainability – as well as the importance of efficient use of resources and meaningful contribution from multiple stakeholders. Some are specific environmental goals, such as SDG 13 (on climate action), SDG 14 (on life below water) and SDG 15 (on life on land). Others include critical environmental dimensions on topics such as SDG 6 (on clean water and sanitation), SDG 7 (on clean energy), SDG 11 (on sustainable cities) and SDG 12 (on responsible consumption and production).

There are also specific targets to create the necessary frameworks, policies and partnerships to ensure implementation. Some of the targets contribute to the reduction and eradication of the harmful effects of development on the environment. This is the case for SDG 1 (on poverty eradication), SDG 2 (on food security), SDG 6 (on sanitation), SDG 9 (on innovation), SDG 16 (on effective institutions) and SDG 17 (on partnerships for the goals). 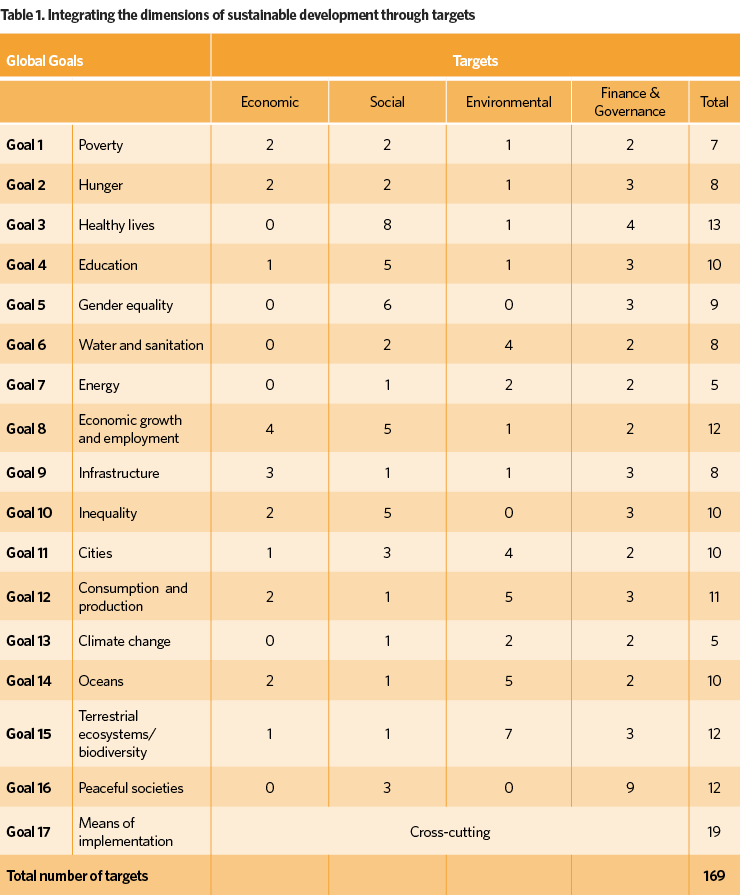 It is through various targets attached to the goals that the fundamental connections between the environment, economic wellbeing and social development are reflected. As Table 1 illustrates, each of the 17 goals incorporates a number of economic, social and environmental dimensions, as well as finance and governance mechanisms. The scope of the SDGs also includes values and lifestyles, and equality. Cutting across all the other goals is SDG 17 (on the means of implementation via global partnership). This goal has the largest number of targets (19). It incorporates targets relating to finance, technology, capacity-building, trade, institutional coherence, partnerships, data, monitoring and accountability.

The index is a composite score derived from the answers to the questions in the national reports submitted to each convention secretariat. Findings to date illustrate that:

The record of national implementation of global environmental conventions illustrates that the effective achievement of the SDGs will require robust governance mechanisms for action and accountability at both national and international level. Ultimately, more systematic and comprehensive empirical work will be critical.