To be sustainable, economies must allow all people, not just a privileged few, to benefit from development 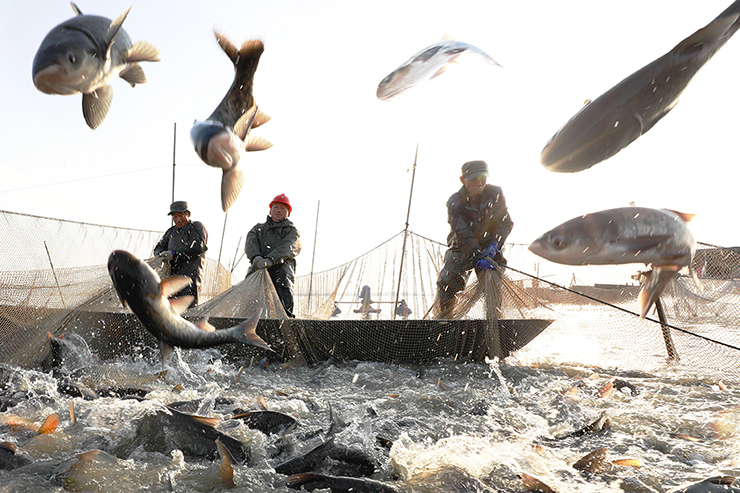 Fish farming in Huai’an, China. Productivity improvements in food production were one of the factors that contributed to China’s economic transformation, which in turn helped more than 850 million lift themselves out of poverty.  © Zhou Haijun/VCG via Getty Images

To be sustainable, economies must allow all people, not just a privileged few, to benefit from development

Economic development for social progress
There is no doubt about the importance of economic progress for poverty reduction. The rapid reduction, indeed halving, in global poverty over the past few decades has been due to economic growth and transformation, particularly in China. China’s achievement can be attributed to improved agricultural productivity and the creation of special economic zones that promote manufactured exports and create jobs. Consequentially, real wages in manufacturing are currently growing at more than 10 per cent a year, which is providing opportunities for such activities elsewhere.

A clear example of economic progress coinciding with social progress is Bangladesh. The country has now become the second-largest garment exporter in the world, despite the sector there only starting in the late 1980s. The last three decades have also coincided with rapid poverty reduction in Bangladesh. The garment sector offers one direct route out of poverty for the rural poor who have migrated to urban areas. This has required investments in rural roads, attracting and spreading the appropriate skills, and facilitation of credit. The sector has created some three million jobs for women. Clearly the health, skills and human development of workers are crucial in the success of garment firms.

Social and economic progress
Taking a long view of the progress of developing countries over the last two centuries, Deepak Nayyar points to the symbiotic links between economic and social progress. The spread of education has provided a basis for development in latecomers to industrialisation. Social and physical infrastructure are also crucial in the early stages of industrialisation, as is the role of the state.

However, it is essential that states must be able to combine economic growth with human development and social transformation in an interactive way. Poverty eradication and employment creation are the objectives and means in development, in the way Amartya Sen describes development as freedoms in economic, social and political rights.

Not all growth is equal
The pattern of growth matters a lot. Economic transformation is necessary to enhance the quality of growth, create jobs and reduce poverty. As continuous, and sometimes remarkably fast, economic growth has become more usual in much of the developing world over recent decades, attention has shifted to the pattern, quality and resilience of that growth.

Issues of concern include the sectoral and social distributions associated with the aggregate increases in gross domestic product, the low-growth elasticity of extreme poverty in many countries (ie extreme poverty does not fall by as much as one might expect as growth rises) and the weak capacity of the most dynamic sectors to generate sustained increases in productive employment.

Much of the growth since the late 1990s, especially in sub-Saharan Africa, has been the result of high commodity prices generating higher incomes within an economic structure that retains many features established several decades ago.

Other sources of recent growth include buoyant urbanisation and the expansion of a service economy serving new upper and middle classes, without any prior transformation of staple agriculture or the emergence of a sizeable manufacturing sector.

This pattern of growth is highly skewed and non-inclusive. Poor countries have been getting economic growth but not economic transformation (as seen in the East Asian tiger economies), or growth with depth. Moving to a different pattern of growth, which combines quality economic progress, job creation and social progress, is essential.

Moreover, it is often the poorest and women who suffer most from environmental degradation such as water scarcity, so overcoming climate and natural challenges can also be done in a way that supports the poorest. On the flip side, poverty and lack of productivity and innovation can lead to lack of investment in green technology and practice. The right type of transformation that provides quality jobs in smart, urban, connected centres (as opposed to urban sprawl) would tackle poverty and climate challenges at the same time.

Finally, today’s digital transformation will only serve society if the process is transparent and inclusive. A risk is that the ‘platform economy’ could concentrate technologies and data in the hands of the few, allowing them to dominate an entire economy.

This risks hollowing out the labour market, favouring a few skilled workers while also needing lots of low-quality and low-pay work. Digital transformation can be a success for everyone, but it requires that the workforce be equipped with the right skills and that the benefits are spread evenly.

History shows us that to tackle today’s challenges and achieve the SDGs, we need to consider the combination of social and economic progress. It is not possible to achieve one in a sustained way without the other, although in the short term one can lead the other.