The global commitment to slash child mortality by 2030 promises to save millions of lives. But achieving it requires a step change in how we facilitate healthy living for society’s most vulnerable 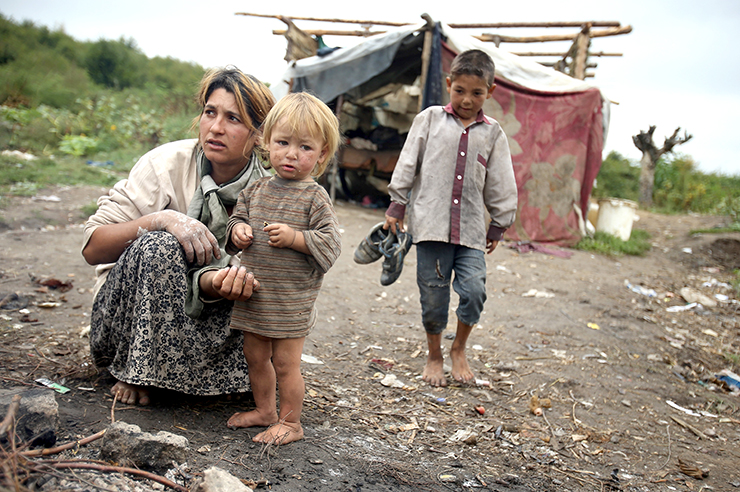 A pregnant woman feeds her children at the Roma settlement of Ponorata, Romania. Under-five mortality rates for the poorest are almost double those of the richest. © Sean Gallup/Getty Images

The global commitment to slash child mortality by 2030 promises to save millions of lives. But achieving it requires a step change in how we facilitate healthy living for society’s most vulnerable

Recent decades have witnessed incredibly rapid progress for children. More children now go to school, receive the life-saving benefits of vaccination, and have access to clean water, sanitation and hygiene than at any time in history. Crucially, more children today survive to see their fifth birthday.

Of all these achievements, the improvement in child survival is perhaps most impressive.

Since 1990, the global under-five mortality rate has dropped by more than half: the lives of 122 million children aged under five have been saved – a number equivalent to the entire population of Mexico. In 2015, 19,000 fewer under-fives died every day than in 1990.

Deaths from diseases such as pneumonia, diarrhoea and malaria – diseases that have plagued humankind since time immemorial – are falling rapidly. This is thanks to the roll-out of vaccines, improvements in drinking water, and inexpensive, high-impact prevention measures such as oral rehydration salts, insecticide-treated bed nets and vitamin A supplementation.

And progress in sub-Saharan Africa, the region that bears the greatest burden of under-five mortality, has accelerated rapidly. Under-five mortality fell by an average of 4.1 per cent per year between 2000 and 2015.

In other words, we are still not reaching the most marginalised with the proven, low-cost, high-impact interventions that we know can save lives.

This is often due to weak health systems, which fail to deliver services where they are most needed. In too many cases, it is also due to a failure of governments to prioritise the most disadvantaged groups – those who are marginalised through financial deprivation, geographical remoteness, educational, social or ethnic status, and many other forms of social exclusion.

If under-five mortality remains at today’s levels, 94 million children under the age of five will die between 2016 and 2030. Recognising this potential tragedy, the world committed in 2015 to an ambitious target: to cut under-five mortality to 25 or fewer deaths per 1,000 live births – under the framework of the Sustainable Development Goals (SDGs).

But reaching this goal will be a challenge: over two thirds of low-income countries and more than a third of lower-middle-income countries need to accelerate progress to achieve the target. Indeed, 30 countries will need to at least double their current rate of reduction, and 11 will need to triple their rate, to reach the goal.

If we are to save the lives of 94 million under-fives, achieving the SDG target in the process, there is an urgent need to step up the pace of action.

Firstly, we must challenge long-standing inequities in health outcomes by: increasing investment and breaking down financial barriers to access;
eliminating the barriers that keep people from achieving good health, including discriminatory practices that block people from accessing services;
establishing community-based services that are accessible and affordable for the most disadvantaged.

Secondly, we must work to strengthen health systems. Recognising that a large share of child mortality today takes place in fragile contexts and during emergencies, these efforts must include preparation for emergencies and efforts to build resilience. Strong community health systems provide a critical foundation for resilience, allowing communities and nations to respond to disasters and weather emergencies, including public health emergencies and natural disasters.

Finally, we must move away from vertical programmes that prioritise one disease while neglecting others, and promote joined-up, integrated health systems that put the child at the centre. Health systems can serve as platforms for delivery of a whole package of interventions and services – a hub for different sectors and diverse partners, including government, civil society and the private sector, to work together to improve health outcomes.

Health systems must also emphasise the importance of sustainable food systems and physical environments that are conducive to child health, particularly in countries facing the ‘double burden’ of under- and over-nutrition.

Prioritising the vulnerable
Improvements will not be achieved solely by expanding access to essential medical services. Improving the quality and accessibility of these services, thereby increasing people’s willingness to use them, is also critical.

An excellent example of the importance of quality of care is around the time of birth. In many countries, the number of women coming to medical facilities to give birth has increased, but this has not resulted in uniform improvements in child survival. This is primarily due to the fact that the quality of care in many facilities is sub-standard, with negative consequences for mothers and their newborn babies.

We must also focus on the factors that often result in poor health in the first place. These include poverty, gender, nutrition, education, water and sanitation, climate vulnerability, girls’ education, discrimination, and political and social rights.

Ultimately, the key to success will be to prioritise the most vulnerable, the most marginalised, the most deprived children and families. Only in this way can we create a safer, fairer world – for every child.