How to work together

The partnerships driving success in the health sector, such as Gavi and the Global Fund, hold lessons for achieving Agenda 2030 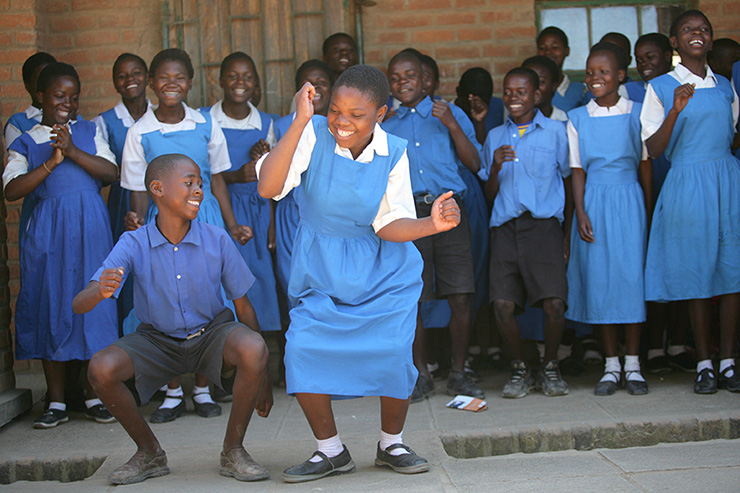 Children at a school AIDS club in Lilongwe, Malawi. The conspicuous progress made against HIV/AIDS under the MDGs derived a large part of its success from global partnerships such as the Global Fund. © UNICEF/Giacomo Pirozzi

How to work together

The partnerships driving success in the health sector, such as Gavi and the Global Fund, hold lessons for achieving Agenda 2030

The 17 Sustainable Development Goals (SDGs) represent highly complex investment and policy challenges. Achieving them will require the transformation of countries’ energy systems, profound changes to land use and food systems, sustainable cities, and massive increases in access to high-quality education and health services.

In addition, policies must be improved to reduce inequalities and promote decent work. These transformations are highly interconnected, and they can only be met through public-private co-financing, unprecedented problem-solving, and the mobilisation of different groups of stakeholders. This is why partnerships are critical for the SDGs.

The need for new forms of organisation and mobilisation in support of the SDGs is obvious. What is less clear is what types of partnerships can best translate good intentions into tangible progress towards achieving the goals.

The SDGs map out time-bound quantitative goals that require commensurate strategies. For example, achieving SDG 4 on education requires the construction of many new schools in developing countries. But focusing on building new schools may divert attention from other pressing education challenges that must be met to allow every child to complete secondary schooling by 2030.

Four criteria for success
Well-intentioned, small-scale initiatives that are not part of an overall strategy to meet the education goal will not be successful in meeting the SDGs. A large number of partnerships of modest scale may fragment sustainable development efforts and undermine results. To avoid these pitfalls, partnerships should meet four simple criteria.

First, they need to be aligned with achieving the SDGs at scale to ensure that a partnership’s efforts complement other initiatives in pursuit of the goals.

Second, by bringing together groups of actors, successful partnerships will promote innovation in delivery models and/or new technologies, so that the SDGs can be met more easily and at lower cost.

Third, they need to be organisationally efficient at delivering the intended results to justify the creation of new organisations.

Fourth, successful partnerships must be able to secure the requisite financial resources, through concessional or commercial terms, that are consistent with achieving the corresponding SDG.

Under the Millennium Development Goals, the health sector experienced the fastest acceleration of progress, particularly in some of the poorest countries in sub-Saharan Africa. This progress was achieved through a series of partnerships, particularly in the areas of increasing access to vaccines under Gavi (the Vaccine Alliance) and the Global Fund’s fight against HIV/AIDS, tuberculosis and malaria.

These partnerships illustrate the four criteria for success. They also hold important lessons for education, access to basic infrastructure services, smallholder agriculture, and the many other SDG priorities where faster progress has proved elusive – not only in the poorest countries, but also in middle-income countries where major implementation gaps remain.

Effective strategies
Take the example of the fight against HIV/AIDS. Following the publication of a landmark report by the Commission on Macroeconomics and Health, the HIV/AIDS team at the World Health Organization (WHO) – led by Jim Yong Kim with strong support from the Gates Foundation – drew up plans for a comprehensive response to the pandemic. Based on a growing scientific consensus, the team developed a fully costed strategy to combat the disease. This included the objective of increasing coverage of antiretroviral therapy from close to zero to three million by 2005.

Such a strategy empowered governments to draw up comprehensive national disease control programmes calling for far greater investments in controlling and treating the disease. In turn, national strategies galvanised governments, civil society, international organisations and business to work on individual components of combating the disease. These included treatment, voluntary testing, counselling and prevention of mother-to-child transmission. But there was also a clear sense of how these components came together in the form of an integrated programme – the first criterion for successful partnerships.

Scaling up the response required massive innovation, which was pursued by many different actors operating with a common vision. For example, President Clinton and his foundation secured a breakthrough deal with the pharma industry to drastically lower the cost of antiretroviral treatment, and the industry improved the performance of its drugs. Countless civil-society organisations (CSOs) innovated new ways of reaching marginalised populations that were infected with, or vulnerable to, the disease. The Global Fund’s ability to disperse funds to national and local governments, CSOs, international organisations and businesses created a healthy sense of competition and encouraged innovation in delivery models.

National treatment programmes were rigorously evaluated. Implementation lessons – for example, changes in the CD4 count (an indicator of immune system functionality) threshold at which antiretroviral treatment was recommended – were published in peer-reviewed literature and taken up in improved treatment guidelines adopted by the World Health Assembly. The interdisciplinary Lancet Commissions established by the editor Richard Horton deserve recognition for promoting and evaluating innovation in delivery models for HIV/AIDS treatment and prevention measures.

In line with the third criterion, the global partnership to fight the HIV/AIDS pandemic had clearly delineated roles for organisations, and minimised transaction costs by avoiding complex coordination mechanisms. The Global Fund focused solely on providing funding and monitoring grant agreements. Technical partners like WHO and the Joint United Nations Programme on HIV/AIDS provided technical assistance to countries as they prepared and implemented programmes funded by the Global Fund.

Moreover, all programmes were rigorously audited and evaluated, including through the Global Fund’s independent Office of the Inspector General.

Finally, the partnership was built around the Global Fund as well as the US President’s Emergency Plan for AIDS Relief (PEPFAR), which together mobilised large increases in financing for HIV/AIDS prevention and treatment. The prospect of macro-economically significant volumes of funding helped support bold multi-stakeholder coalitions in countries to take on the HIV/AIDS pandemic. Funds were exclusively provided as grants, since poor countries would have been unable to pay back loans.

To ensure effective use of resources, countries graduated from Global Fund support once their per capita income or disease prevalence had reached certain thresholds.

The global partnership built, largely informally, around the Global Fund has made impressive gains, particularly in some of the poorest countries. These breakthroughs were achieved against widespread scepticism that the HIV/AIDS pandemic could be controlled or that an international partnership around an increase in official development assistance could achieve positive results.

They have shifted the international debate on HIV/AIDS from emergency response to ending the disease. The success underscores the fact that new forms of organisation across a broad coalition can generate impressive results if they meet the four criteria for successful partnerships.

Implementing the SDGs will require new, creative partnerships that can innovate, mobilise funding, and support service delivery or investments. Practitioners will benefit from studying the lessons from the fight against HIV/AIDS. Many of these lessons will be applicable to the various challenges we face: ensuring universal completion of secondary education, achieving universal health coverage, moving towards sustainable food and land-use systems, decarbonising energy systems – and many more.