Helping those most at risk

Climate change threatens to hamper development for some of the world’s most vulnerable nations. What can the international community do to ensure these countries adapt successfully? 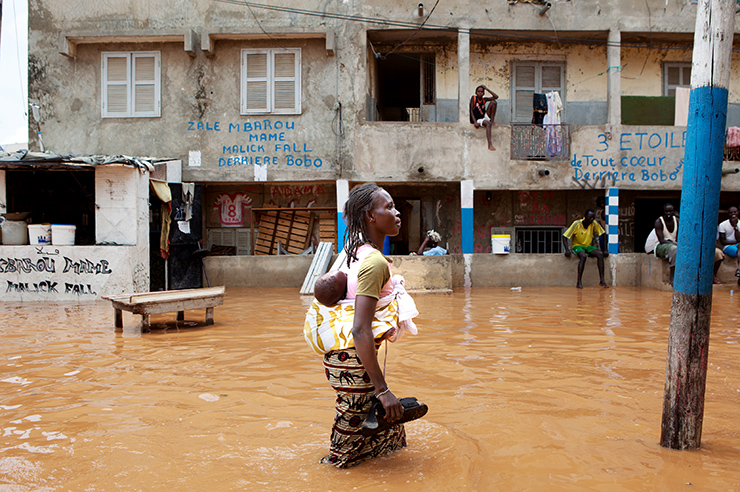 Flooding in Senegal’s capital, Dakar. The Green Climate Fund, in conjunction with the African Development Bank, is financing a project to tackle urban flooding in Senegal. © Joe Penney/Reuters

Helping those most at risk

Climate change threatens to hamper development for some of the world’s most vulnerable nations. What can the international community do to ensure these countries adapt successfully?

By Peter Thomson, President of the 71st session of the UN General Assembly

In my home country, Fiji, the effects of climate change are manifesting in tropical cyclones of increasing ferocity. Our neighbouring countries – Tuvalu, Kiribati and the Marshall Islands – are threatened with complete inundation by rising sea levels caused by global warming. In these islands, climate change is an existential threat, making resilience the new hallmark, if not question mark, of development.

This precarious future is shared by people and economic systems located in low-lying coastal areas. Some of these low-lying areas, rice-producing river deltas for example, are central to humanity’s food security – as are major economic centres located at sea level around the world.

It is now accepted beyond all reasonable doubt that anthropogenically created greenhouse gases are causing global warming. 2016 will have been the warmest year on record. As the world warms, desertification spreads, climate events such as droughts and storms intensify, and glaciers and ice melt. The resulting loss of habitat, agriculture and fresh water supplies, and the consequential human hardships, will displace many millions of people, making human migration the twin ramification of climate change in the 21st century.

In response, humanity has put in place the Paris Agreement on climate change and the 2030 Agenda for Sustainable Development, the latter containing the 17 Sustainable Development Goals (SDGs). The full implementation of these measures will bend our path away from the precipice of unsustainability to which we are currently headed.

Indecision and inaction on climate change will undermine the SDGs. Sustainable peace will be increasingly threatened as natural resources become strained: according to the World Bank, water scarcity could cost regions such as the Sahel and Middle East up to six per cent of their GDP by 2050, due to water-related impacts on agriculture, health and incomes. Conversely, the right climate change decisions and actions will be a win-win for both the climate and for the achievement of the SDGs.

Advancing implementation of the SDGs has to be the priority of every government and enlightened stakeholder. Correct climate solutions to reduce emissions and strengthen resilience will simultaneously benefit multiple SDGs, such as those on people’s health, biodiversity, economic growth and equity.

In the wake of natural disasters, the linkages are clear between people’s livelihoods, climate-resilient infrastructure and robust economies. They are manifest in smart urban planning and the viability of businesses that are most dependent on natural resources such as agriculture, fishing, forestry, tourism and global trade.

Support mechanisms
The UN provides a network of support for governments, of developing states in particular, to achieve their sustainable development ambitions. No fewer than  40 UN specialised agencies, funds, programmes and other bodies support governments at the global, regional, national or sub-national level, standing ready to advance climate action.

Practical mechanisms now exist to assist developing countries in facing the challenges of climate change, providing a spectrum of options for governments. These include the Green Climate Fund (GCF), the Global Environment Facility (GEF) and the Adaptation Fund.

With over $10 billion in mobilised resources, the GCF, which was established by the parties to the UN Framework Convention on Climate Change (UNFCCC) in 2010, has the capacity to fund projects on a scale from micro (under $10 million) through to macro (over $250 million). Impressively, this relatively new fund was projected to approve close to $2.5 billion of funding in 2016.

The GCF board recently met in Samoa where it approved eight new funding proposals valued at $315 million and accredited seven new partner entities.

Since its establishment just before the 1992 Rio Earth Summit, the GEF has invested almost $15 billion in developing countries and countries with economies in transition. It has leveraged over $75 billion more for roughly 4,000 projects in 167 countries, collaborating with over 18 agencies on implementation.

The Adaptation Fund pioneered direct access for developing states to climate financing, wherein national and regional entities manage all aspects of their funded climate adaptation and resilience projects. It also offers a Readiness Programme for Climate Finance to enhance governments’ capacity to receive and manage climate financing. Since its creation under the Kyoto Protocol in 2001, it has allocated $358 million to support 55 adaptation and resilience projects in 48 countries, with more than 3.7 million direct beneficiaries.

This list could go on, including support via regional development banks. The Asian Development Bank, for example, currently provides about $400 million to the Pacific Small Island Developing States. This figure is projected to increase to between $750 million and $800 million a year by 2020 to address climate change impacts in the islands.

These public funding mechanisms are a critical part of the equation, but they will not be sufficient to meet the world’s pressing climate and development challenges.  There is some positive news in this regard. Various surveys show that the business sector is far more aware of the SDGs than the average person on the street. This makes good sense, for the transformational nature of the SDGs will demand economic activity that by definition will be good for businesses that engage.

The price tag for global transformation  to sustainability is high, with rough estimates for financing the SDGs ranging from $5 trillion to $7 trillion of incremental annual investment. Current public finance falls far short, even if developed countries meet the global commitment of 0.7 per cent of gross national income from developed states.

For the SDGs to be achieved, private investment will most definitely be required to create new financing streams and reorient existing streams in support of sustainable development.

Deep transformation
More positive news is that the greening of financial systems around the world is becoming a reality, with the growing realisation that sustainability applies to every aspect of human activity. The outcome communiqué of the 2016 G20 summit in Hangzhou confirmed commitment to address the issues of climate change and green finance. Green bonds were projected to exceed $75 billion in 2016 and impact investments topped $15 billion in 2015. Initiatives are growing to establish and transparently report sustainability standards for industry, stock exchanges and corporate procurement.

More smart business leaders need to come forward – CEOs, financial managers, policymakers, shareholders, regulators and company directors – who see the writing on the wall and are prepared to take responsible action. In short, sustainability should join profit as a key fiduciary responsibility for all concerned. And as consumers in the marketplace, we should all do the right thing and reward such responsibility in our choices of products and services.

Ultimately, addressing the climate challenge will require deeply transforming the way the world does business and how people live. Every empowered person can contribute – in large ways and small – through civil life and daily habits, and in their home, community and work life. Ultimately, responsibility rests in the hands of governments. And therein lies the irreplaceable role of the UN in defending the global commons.