Human activity has left the oceans – and the life they support – in a perilous state. Could a new UN ocean treaty bring oceans back from the brink? 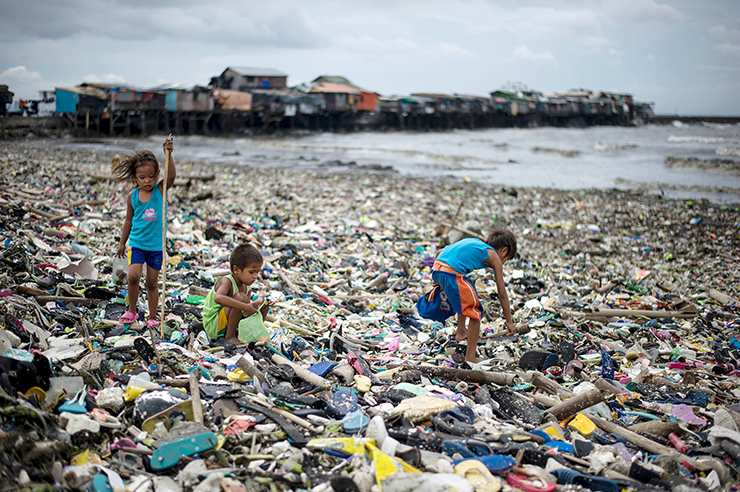 Children collect plastic bottles among the garbage washed ashore by a storm surge in Manila Bay, the Philippines. There are more than 150 million tonnes of plastic in the ocean today. © Noel Celis/AFP/Getty Images

Human activity has left the oceans – and the life they support – in a perilous state. Could a new UN ocean treaty bring oceans back from the brink?

The oceans are our planet’s true life source. They regulate the climate and give us oxygen. They are a major food source and food security provider for over three billion people who depend on marine and coastal biodiversity for their daily nutrition and livelihood. The oceans have also been offering us a buffer against climate change. They have absorbed around 30 per cent of all the additional fossil carbon ever emitted by human activities and 90 per cent of the excess heat – with major consequences for the oceans’ chemistry and ecosystems.

It is clear that humanity depends on healthy oceans, just as we as individuals depend on a healthy body to survive. Governments recognised the importance of oceans for our collective future at the UN Summit on Sustainable Development with the adoption of a dedicated Sustainable Development Goal (SDG) for oceans (Goal 14). This sets specific targets for oceans’ protection, including on pollution, overfishing and conservation.

Meeting these ocean targets is more urgent than ever. Decades of over-exploitation and abuse caused by short-term corporate interests and governments’ inaction have pushed the oceans to the brink of collapse. Global overfishing remains out of control.

For example, the Pacific bluefin tuna population has been driven down by over 97 per cent due to rampant overfishing. What is true for tuna is unfortunately true for many marine species. In fact, a recent study warns that humanity is driving an unprecedented extinction of life in the oceans, which will disrupt ocean ecosystems for millions of years.1

While we empty our seas of fish, we fill them with waste. Over 150 million tonnes of plastic are in the ocean today – at all depths of the water column, from surface to ocean floor, and at all latitudes, including within Arctic ice. At the same time, oil companies like Shell and BP ignore our planetary boundaries and look further and deeper in our oceans for the last drops of oil. There are even plans to mine the seabed for minerals, which would cause unprecedented impacts to already fragile ocean systems.

Governance gap
Major change is needed to the way in which industry and governments treat the oceans. To restore the seas, and increase their resilience and productivity, science tells us that we must establish a well-managed network of ocean sanctuaries both in coastal waters and on the high seas.

This is especially true if we want to deliver the ambition of the Paris Agreement to keep global warming to 1.5°C. Doing so will likely not be possible unless we preserve and strengthen the oceans’ natural carbon-sink capacity. Despite recent announcements of new marine protected areas in national and international waters, only three per cent of the world’s oceans are protected. This falls dangerously short of the target to protect 10 per cent by 2020 set by SDG 14, and is a far cry from the goal of 30 per cent of highly protected areas by 2030 agreed at the 2016 International Union for Conservation of Nature congress in Hawai’i.

The situation is especially dire on the high seas – the two thirds of the ocean surface that, as a global commons, does not belong to any one country but to all mankind. Lacking an international legal framework to designate and effectively manage high-seas sanctuaries, only a shocking one per cent is under protection today. To fill this governance gap, governments at the UN are currently negotiating a new ocean treaty under the UN Convention on the Law of the Sea, for the conservation and sustainable use of the open ocean. The negotiations are coming to a crucial stage in 2017, when the Preparatory Committee, where these discussions are taking place, is expected to agree its recommendations to the UN General Assembly.

The UN conference to support the implementation of SDG 14 in June provides an important opportunity to call for urgent ocean action and the swift conclusion of a strong UN ocean treaty to help meet the global ocean conservation goals.

In a world where everything is interconnected, there is no such thing as a dying ocean and a thriving, living planet. There is hope when more and more people stand up against corporate interests, speaking truth to power and demanding a better future. In West Africa, local communities strive for a better tomorrow by fighting for sustainable fisheries, and an end to overfishing in their waters by foreign fleets from China, Russia and Europe.

Greenpeace has been campaigning to end the plunder of global tuna stocks and the associated human rights violations. It has joined forces with consumers, demanding that corporations adopt just and sustainable practices throughout their supply chain. Around the world, the ‘people vs oil’ movement has been taking on oil giants, and communities are saying no to plastics in our oceans.

The 2030 Agenda for Sustainable Development states that “the future of humanity and of our planet lies in our hands”. The SDGs give us a clear direction of travel and a global understanding that anything that falls short of these goals is simply not enough. Let’s join forces in this journey to overcome the major challenges of our time, protect the global commons – like the oceans – and build a green, just and peaceful future for us all.