Is current patent law incompatible with promoting wellbeing for all? 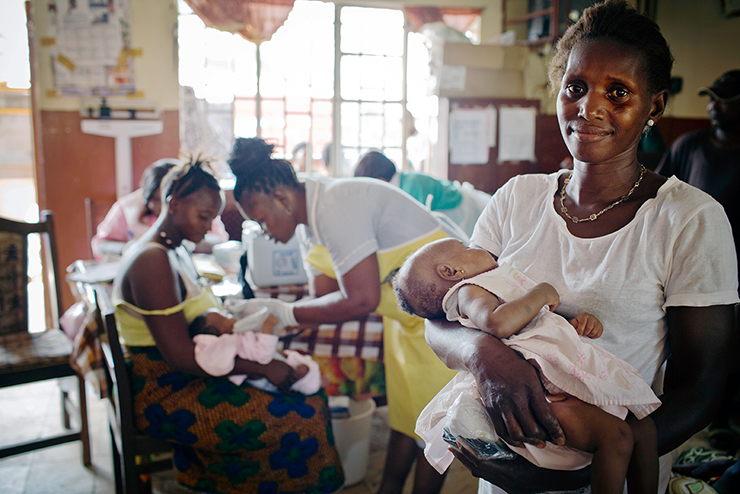 Babies receiving the life-saving Ebola vaccine in Sierra Leone. The TRIPS agreement achieved its purpose of reducing prices and increasing access to early generations of antiretroviral drugs for treating HIV/AIDS but has failed with newer generations. It is essential that access to the Ebola vaccine is not impeded. © Gavi/2016/Kate Holt

Is current patent law incompatible with promoting wellbeing for all?

Sustainable Development Goal (SDG) 3 aims to ensure healthy lives and promote wellbeing for all. As an integral part of this, it sets the target of providing access to affordable, effective and quality medicines and vaccines. It also affirms the role of using the flexibilities contained in the Agreements on Trade-Related Aspects of Intellectual Property Rights, or the TRIPS agreement. This is a treaty agreed in 1994 and administrated by the World Trade Organization. The treaty says that intellectual property (IP), especially patents, should not be used to hinder the provision of medicines for all.

Yet nearly two decades on from the 2001 Doha Declaration on TRIPS and Public Health – reaffirming the treaty’s principles – many patients around the world still face restricted access to life-saving treatments for communicable and non-communicable diseases.

There are several examples of the pharmaceutical market failing patients around the world. The earlier generation of antiretroviral medicines treating HIV/AIDS saw a remarkable fall in price, caused by competition from generic medicines on the global market since the early 2000s.

However, generic competition on the newer generation of HIV/AIDS medicines has been more difficult to establish. This is because more and more countries are granting patents on newer medicines, even after they have acceded into the TRIPS framework. The current market-driven model incentivises pharmaceutical companies to focus on lucrative markets, curbing the options for patients with limited purchasing power.

Beyond HIV/AIDS, in recent years the high prices of medicines backed by patent monopoly have been denting health budgets. For hepatitis C, a new generation of oral treatment with direct-acting antiviral (DAA) medicines offers new hope to sufferers. Yet, the World Health Organization estimates that in 2016 there were still 68.9 million people worldwide infected with hepatitis C who lacked access to DAA treatment.

One of the reasons hindering access to DAA is the monopoly strategy deployed by pharmaceutical companies. In 2014, Gilead launched its blockbuster DAA medicine Sofosbuvir at $1,000 per pill for a 12-week treatment. The high price compelled a few high-income countries including Switzerland and the UK to ration the provision of Sofosbuvir in their national treatment programmes.

The high prices of cancer treatment have also triggered protests in both high- and low-middle income countries. In 2017, more than 100 civil-society organisations from South Africa, Malaysia, the UK, France, Brazil, the US and Zambia came together for a global day of action against pharmaceutical company Roche. Protestors were angry at Roche’s monopolistic strategy, which included applying for additional patents on the same medicine to prolong market exclusivity.

Conflicting obligations
For 25 years, the requirement for countries to make patents available for medical products under the TRIPS agreement has caused heated debate. Patents provide a set of exclusive rights to the holder to prohibit anyone from using, selling, producing, importing or offering to sell a product, technology or the process of making a product without the consent of the patent holder in countries where the patent is granted, for at least 20 years.

This then raises the question of TRIPS’ impact on the right to health under human rights law. The International Covenant on Economic, Social and Cultural Rights (ICESCR) is a multilateral treaty that includes the right to health. A Human Rights Council resolution issued in 2009 confirmed that it is the responsibility of states to provide all medicines needed to realise the right to health. There is therefore a question to member states of ICESCR who are also signatories of the TRIPS agreement to weigh their obligations under these two distinctive legal frameworks. Generally, there are weak mechanisms available to solve conflicts between these international laws.

At the UN level, a couple of official documents and statements issued by the Committee on Economic, Social and Cultural Rights and the Sub-Commission on the Promotion and Protection of Human Rights attempted to affirm that when IP law hindered states in fulfilling their obligation under ICESCR, those states should be considered as failing to comply with their core obligations under the right to health. Later documents also affirmed the importance for states to use TRIPS’ flexibility to protect public health and fulfil their core human rights obligations.

However, the human rights perspective was not reflected in the discussions under the framework of the TRIPS agreement. Even the Doha declaration does not use human rights language in its framework (apart from recognising the need to protect public health and affirming the right to use the full flexibilities under TRIPS to protect public health). There are also no authoritative interpretations reconciling the two frameworks to determine the level of priority when conflicts arise.

The problem is exacerbated by the further liberalisation of trade at the global level. IP rules on medical products in bilateral and regional trade agreements often go beyond the minimum requirements of TRIPS. The continued lack of clarity about the priority of states’ obligations under trade agreements, IP treaties and human rights treaties needs to be looked at more seriously in the light of SDG commitments. Without the insurance of non-interrupted provision of affordable medicines, the achievement of SDG 3 targets will be substantively harmed.

Challenging TRIPS flexibilities
Over the past two decades, national governments have used compulsory licences and other flexibilities enshrined by the TRIPS agreement to enable and improve access to affordable medicines for their citizens. Recently, however, the use of these flexibilities has been challenged in trade negotiations. Industry has argued that countries should scale down their use of flexibilities, or not use them at all.

But practical examples continue to show the importance of retaining the right for governments to use the TRIPS flexibilities. In 2017, the Malaysian government issued a compulsory licence on Sofosbuvir, allowing generic (and much cheaper) versions of the drug to be produced locally. This is despite Sofosbuvir still being under patent in Malaysia by manufacturer Gilead.

A recent article published by the British Medical Journal also reviewed examples in which the threat of the use of compulsory licences led to considerable price reductions in lifesaving medicines. To achieve SDG 3, many more countries will need to use legal measures such as these to prioritise health over patents.

A way forward?
There are a few areas where we need breakthroughs at the international level to pursue a genuine global collaboration and to refocus policy.

1. Alternative R&D model for medicines
The pharmaceutical industry argues that patents are essential to recoup its investment on research and development (R&D), encouraging new innovation on medicines. This argument has faced severe criticism, as evidence shows that R&D investment decisions under the current business model are chiefly determined by the prospect of taking a drug to market rather than by unmet health needs. Discussions on the need to establish an alternative model have therefore focused on the need to develop a health-driven approach to R&D. This must be backed with a publicly accountable financial, production and delivery mechanism, so that the cost of R&D is delinked from a medicine’s final price. A highly valuable medical innovation will only be sensible if all patients who need it can access and afford it.

2. Unlocking the dark room of pricing
In May 2019, a heated discussion on the current challenges facing public health authorities around the world took place at the 72nd World Health Assembly in Geneva. The Assembly resulted in a milestone resolution on price transparency on medicines. Health ministers and officials voiced their experiences and frustrations of bargaining with the pharmaceutical industry to get affordable medicines for their citizens. They bemoaned a lack of transparency about companies’ price-setting strategies and about the comparative prices of the same medicine in other countries. Pharmaceutical companies are able to set prices for different markets based on their own assessments. Their ability to do this is mostly supported by their market monopoly status, underpinned by patents and other related strategies. However, some critical elements are still missing. This is because of disagreements over transparency on the costs of clinical trials, an important factor influencing price-setting in the current model. With the current resolution as a starting point, every government that has signed up to ensuring access to affordable medicines for all should therefore press for further and more comprehensive transparency in the pharmaceutical sector.

3. Supporting and using public health safeguards under the current patent system
There is ample evidence establishing the essential role of securing public health safeguards in patent law to protect access to medicines. It is therefore critical that the public health value of using TRIPS flexibilities remains firmly stated at the international policy agenda. This is especially true in light of the explicit indicator set up under SDG 3 related to the use of TRIPS flexibilities for health. Political pressure to hinder countries’ use of these legal and policy mechanisms would have a detrimental effect on achieving SDG 3.

4. Refocusing on human rights
The conflicts between states’ obligations under human rights law and trade law must be resolved. The collective obligations under Agenda 2030 can only be achieved if we put the human right to health at the centre of the debate. The core obligation of states to provide timely, uninterrupted, affordable and sustainable access to medicines should be a higher priority than providing patent protection on new medical products.