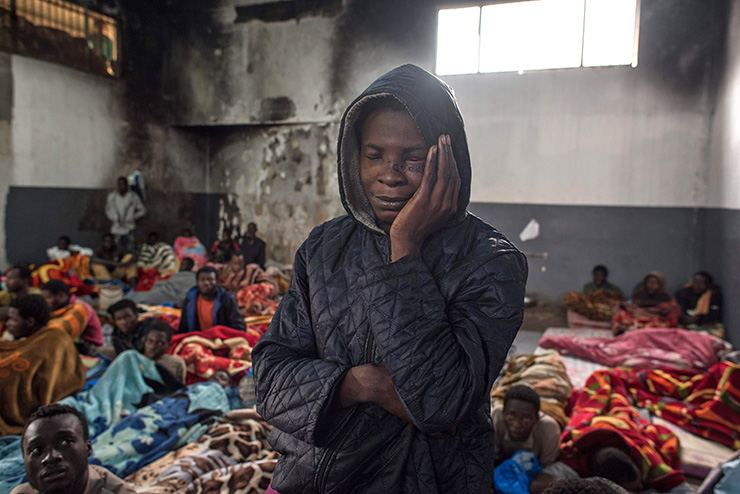 A detention centre on the outskirts of Tripoli, Libya, which holds migrants who were attempting to cross to Europe. In addition to the dangers of the journey itself, migrants face the risk of exploitation or even slavery if they reach their destination. © Taha Jawashi/AFP/Getty Images

Migration is one of the defining features of the 21st century. It contributes significantly to all aspects of economic and social development everywhere, and as such will be key to achieving the Sustainable Development Goals (SDGs). Different levels and opportunities of development can be a driver of migration. At the same time, migration can increase development and investment for those who stay, fill labour gaps in host countries and contribute to development in so-called ‘transit’ countries.

It is a strong poverty reduction tool – not just for migrants themselves, but also for their families and their wider communities. As such, it has an important role to play in realising the Global Goals of the 2030 Agenda for Sustainable Development.

But migration can also have negative impacts on development, and though the relationship between the two is increasingly recognised, it remains under-explored. It is essential to understand the impacts of migration on the achievement of all SDGs, and – equally – the impact this achievement will have on future migration patterns.

As the global compact for migration  (GCM) is being negotiated at the UN, it is more important than ever to understand these relationships and their implications for policy.

The 2030 Agenda is well placed to reflect and exploit the links between migration and development. For migration, the SDGs represent an incredibly important step in development policymaking. The global targets are the first to recognise migration formally in international development frameworks and processes. This highlights the importance of migration as an issue, and cements it as a factor that can contribute to development and poverty reduction.

Crucially, the 2030 Agenda has the necessary political ‘traction’ – in many UN Member States and within the multilateral system. The impacts of migration can be felt at all stages of a migrant’s journey: in origin, transit and destination countries. As such, migration requires coordination between different sectors and multiple actors, as well as enhanced coherence across policies. This kind of coordination is only possible with high-level buy-in, something the SDGs have already secured.

By explicitly referring to migration, the 2030 Agenda recognises the economic value of migrants and the challenges they face. But the myriad ways in which migration interacts with development are not captured in the goals. While migration and remittances are covered by several targets, the SDGs are otherwise silent on this critical issue.

Yet migration is relevant to many of the other SDGs. If countries are to achieve them, they need to consider the impact of migration at all levels and on all outcomes, beyond the migration-specific targets. Efforts have been made to fill this gap. Recent research at ODI shows that migration is not a development ‘problem’ to be solved, but a mechanism that can contribute to the achievement of many of the goals.

1. Migration is a powerful poverty reduction tool, which can contribute to the achievement of the SDGs
Labour migration can reduce poverty for migrants themselves, their families, and their origin and host countries. Migrants and their families benefit from increased income and knowledge, which allows them to spend more on basic needs, access education and health services, and make investments. For female migrants, increased economic resources can improve their autonomy and socio-economic status.

In origin countries, migration can lead to increased wages and greater economic growth through higher incomes, spending and investment of migrant households. In host countries, migrants can fill labour gaps and contribute to services and the fiscal balance.

However, migration does not always achieve its full potential: poor urban migrants often work in the informal sector where the rewards of migration are lower. The high costs involved in different stages of the migration process reduce financial payoffs, and restrictions on mobility prevent those who would benefit the most from migrating in a regular and orderly way. Large and unexpected migration flows can also disrupt education systems, disadvantage migrant and refugee children, and create tensions in host communities.

2. The specific risks and vulnerabilities of migrants are often overlooked
The risks and vulnerabilities of migrants throughout the migration process are often overlooked in development processes. Migrants experience both migration-specific vulnerabilities – that is, those experienced by migrants only – and migration-intensified vulnerabilities, when migration exacerbates a disadvantage that can be experienced by all. An example of the former is female migrants working in less regulated and less visible sectors being at greater risk of exploitation and abuse, including trafficking. An example of the latter is that migrants are more likely to live in informal settlements, lacking access to health, education, water and social protection services.

3. The implementation of existing programmes is often weak for migrants
Access to basic services, such as health education and social protection, is key for migrants’ livelihoods and development prospects. While in some cases migrants are able to access these services through existing or specifically designed programmes, their implementation is often weak and levels of uptake are low. A number of factors contribute to this: limited capacity in implementing institutions; funding gaps; a lack of political support; and reluctance among migrants to participate.

For instance, while migrants in Thailand are covered by the country’s universal healthcare scheme, relatively few migrants take advantage of it. This is due to language and cultural barriers, fear of discrimination, fear of losing employment due to absence, and poor employer compliance with the scheme.

In principle, three quarters of the world’s migrants are entitled to some form of social protection through a multilateral, bilateral or unilateral agreement. But in practice, enforcement of these agreements is poor, implementation weak and take-up by migrants low. Likewise, while often eligible for education, immigrant students tend to face greater difficulties than their host- country peers in accessing education and achieving good learning outcomes.

4. There are major data gaps
Finally, there are significant data gaps. Data are often not disaggregated by migrant status or comparable across different groups and countries. As a result, we do not know the share of migrants actually able to participate in social protection programmes, access health services or attend school.

The collection and monitoring of this disaggregated data, accompanied by migrant-specific indicators, is vital to understand the vulnerabilities and needs of migrants. Only then can governments and non-governmental organisations design migrant-specific and sensitive support.

Unfortunately, there are no internationally standardised approaches for collecting this data, and only limited coordination of the data that different actors have already collected. The implementation of the 2030 Agenda and the agreement of a new GCM offer opportunities to address this important gap.

Implications for migration and development policies
Development policies and programmes can be part of a comprehensive strategy to better manage migration and make the most of its economic and social benefits. To do this, migration must be ‘mainstreamed’ in the implementation of the 2030 Agenda. We need to identify and highlight the links, opportunities and challenges related to migration under specific goals and targets. Policymakers need to consider, measure and take account of migration to harness its positive benefits and reduce potential challenges.

The multiple facets of the relationship between migration and development offer concrete policy entry points to help achieve the SDGs – including in specific sectors, such as health and education. For instance, the International Labour Organization’s decent work agenda is highly relevant to migration. Any programming as part of this agenda should consider the specific vulnerabilities of migrants in the workplace and the specific barriers migrants face in accessing workplace social protection schemes.

The GCM represents a unique moment of opportunity to put the nexus between migration and development on the global policy agenda. The SDGs, meanwhile, provide a holistic and comprehensive framework to support this nexus. It will be important not to limit the focus to specific targets on migration and remittances, but rather to consider the role of human mobility in achieving all the goals. And, while the GCM framework and aspirations are global and grounded in international cooperation, actions need to be led locally and rooted in the specific contexts, countries, regions and markets where particular development opportunities and challenges exist.

An extended version of this text was published in September 2017 as part of ODI’s work on Migration and the 2030 Agenda for Sustainable Development.