The SDGs provide a development agenda to 2030, but will also set the direction of travel for many decades. Might the goals outlive the institutions tasked with delivering them? 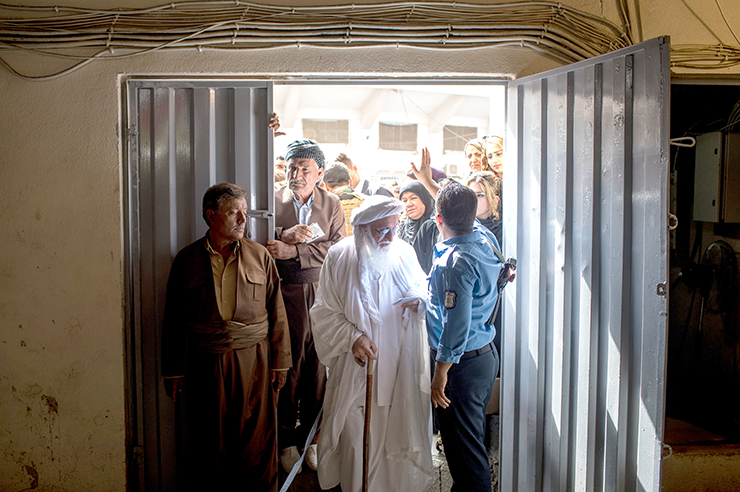 Erbil, Iraq: waiting to vote in the referendum on whether the Kurdistan Region should become an independent nation. The referendum and the vote to secede met with a fierce backlash from the national government and neighbouring countries. © Chris McGrath/Getty Images

The SDGs provide a development agenda to 2030, but will also set the direction of travel for many decades. Might the goals outlive the institutions tasked with delivering them?

The SDGs are global goals. As the custodian of our global system, the UN has been tasked with enabling their implementation. As acknowledged in SDG 17, the UN’s only hope of achieving this is in partnership with a wide variety of actors, not just state actors. But can such a – by design – state-centric institution as the UN think effectively beyond the state? Can anyone?

Let’s start at the very beginning: what makes a nation a nation? Benedict Anderson gave perhaps the best answer in his 1983 book Imagined Communities. A nation consists of a census, a map and a museum. In other words, it is the association of an idea with a group of people and a defined geography.

There are two important consequences of this theory. One is that there is nothing innate about the idea of a nation. Indeed, it is surprisingly modern. Anderson argues that the term had little meaning before the 1648 peace of Westphalia.

He goes on to show that it didn’t really take off until the mid-18th century when ‘print capitalism’ allowed a coherent and shared sense of identity to last and spread over distances greater than a day’s travel.

That is not to say that there were no nation states before then – but it was a concept that would have meant little to nothing to anyone beyond a tiny urban elite.

The other consequence is that nationhood is not the binary criterion that it appears to be at this moment in history. The state used to be a much more fluid concept. The firming up of the idea of the nation is partly a legacy of empire. It would be incredibly naïve not to recognise that at a different moment in history the idea might not soften, or even vanish entirely, once again.

Twilight of the nation
If you wanted to, you could make the case that this is happening already – the recent Catalan independence movement, the near success of the referendums in Scotland – to show that now even prosperous, peaceful countries are seriously considering fragmenting. New states are born at an increased rate, most recently South Sudan.

This could be a cause for hand wringing. You could make the case that when the UN General Assembly declared in 1960 that all people have the right to self-determination it should have placed limits on the principle. It did not safeguard determination at the level of the sovereign nation, and so it set in motion an inevitable cascade of Balkanisation that shows no sign of ending, and may eventually sound the death knell of sovereign nationhood.

To which one might respond, so what? Perhaps the idea of a nation has outlived its usefulness. Perhaps it was only ever a product of convenience, and – as it becomes inconvenient – should rightly shuffle off into the dustbin of history.

Or one might respond by refuting the idea: pointing in particular to the recent rise of populist nationalism to demonstrate that the nation state has never been more popular. Clearly the idea does work for some, but for whom? Populist nationalists have been effective in selling nationalism as a remedy for the ailments of the losers under the current global system. But given nationalism is the defining feature of the current system, is that line of argument credible? Can nationalism offer anything other than an ‘other’ to scapegoat? There is little evidence to suggest so.

But the counterargument is hamstrung by the fact that few people in a position of authority would be interested in making it too strongly, given they depend upon the status quo for their authority. Our political leaders attempt to persuade us that the idea of nationhood is innate and permanent. But they would, wouldn’t they?

A national climate
Whether you view nationalism as a solid idea with stable foundations, or a creaking edifice that is starting to teeter, it may not matter very much in light of the size of the deluge heading its way.

The concentration of CO2 in the Earth’s atmosphere is now above 400 parts per million and it is likely that no one currently alive will ever see it dip below that level. Global warming of at least 1.5°C is probably now inevitable. The only questions are how much warmer the world will get, and what a warmer world will look like.

One thing we do know is that large parts of the planet will become less habitable, meaning many of their inhabitants will have to move. The International Organization for Migration says that “future forecasts vary from 25 million to 1 billion environmental migrants by 2050, moving either within their countries or across borders, on a permanent or temporary basis, with 200 million being the most widely cited estimate.”

It is harder to imagine fewer environmental migrants by 2100. Nor will these migrants be evenly spread – whole regions may end up on the move.

What does nationhood mean in a context where up to one person in ten – and some entire societies – are on the move? The idea will adapt or it will perish. If we cling to the world of borders and barbed wire then the only thing we can say about the 21st century with confidence is that there will be blood. What if instead we develop a new, more adaptable and inclusive definition of nationhood, one that might have the flexibility to bend but not break in the more fluid decades to come?

Nationhood 2.0
Anderson linked the idea of the nation to the force of print capitalism. Perhaps what replaces it will come – whether we want it to or not – from digital capitalism. Daily newspapers gave the residents of Aberdeen and Abergavenny a sense that they were part of the same polity. Now Twitter performs that role, but also links Aberdonians with Anaheimers and Adelaideans.

Horizontal linkages around values, purchasing choices and other forms of identity become as important as a vertical, geographic sense of place. The internationalisation of capitalism and the rise of global brands and media exacerbate the trend. The census is replaced with a network of followers, the map disappears, and a trending topic or viral video replaces the museum.

United supernations or subnations?
As the idea of the nation changes, does our global system also change? And where does this leave the Sustainable Development Goals (SDGs)?

Some have suggested that the global system will itself replace the nation. This is certainly a driving force behind populist nationalism. From the fevered conspiracy theories on the American right about Agenda 21 (in reality an entirely mundane outcome document from the 1992 Rio Summit subsequently superseded by the Millennium Development Goals and then the SDGs); to the entirely understandable feeling of lost control when (as has happened from Port Talbot to Detroit) government appears incapable of protecting its citizens from global economic forces – nationalism presents itself as a bulwark against the threat of a globalist ‘empire’.

But what this analysis misses is that the forces of globalism are also the forces of deregulation. Having internationalised to avoid control by the state, global corporations are unlikely to want to create new structures to limit themselves. As for the global system we have, it is the child of sovereign nation states. They are unlikely to wilfully declare themselves vassals of the Supernation.

Perhaps a more likely direction for the global system – and a more compelling response to both nationalism and the threats nationalism would oppose – is to go down instead of up. Devolution instead of empire.

We will always have Paris
This happened in the United States when President Trump pulled out of the Paris Climate Treaty (as covered extensively in the most recent edition of our sister publication Climate 2020). What was established as a treaty mechanism for sovereign nations demonstrated its ability to become an agenda for federal states, networks of mayors, civil society, the private sector and a whole host of non-government actors who rapidly rendered the President’s decision scarcely relevant.

The SDGs are also showing signs of this increased localism and regionalism. Aside from the formal notions of local partnership embedded in SDG 17 (partnership for the goals) and implicit in SDG 11 (sustainable cities and communities), we have seen multiple attempts to localise the goals. A Global Taskforce of Local and Regional Governments and a Network of Regional Governments for Sustainable Development have been established. Further, the Secretary-General’s proposals for development reform contain no fewer than six new parallel initiatives for deepening non-state partnership.

UN frameworks have also occasionally loosened rules about non-state actors attaining parity with states: UNESCO accepted Palestine as a full member long before the UN gave it even observer status. The United Nations Framework Convention on Climate Change accepts the non-states Niue and the Cook Islands as full members.

But by and large the fundamental architecture of the UN and of our global system, and thus of the SDGs, is one of Member States. For 2030 this may not matter, but in the long term global frameworks may need to shift if power dissipates away from the state level.

Local and regional partnerships may help square the circle for a while longer, but in the long run more fundamental shifts may be needed. Perhaps parts of our global system will have to move from the constitutive model of statehood to the declarative model (broadly speaking, this means moving from “you are a state if we all think you are” to “you are a state if anyone thinks you are”) in order to ensure places such as Taiwan, Western Sahara and Puntland are not left behind by the SDGs.

It would be foolhardy to speculate as to what the future holds, but it would be even more foolhardy to assume that it will look just like the present. The meaning and importance of the nation state has waxed and waned (mostly waxed) throughout history and will no doubt continue to do so (and, I expect, wane).

But people will still need to find ways to talk to each other without killing each other, and will still need to work together to build themselves out of poverty. So if we are serious about planning for the long term, then our global institutions, and global agendas such as the SDGs, need to look beyond states and nationhood.