Global response to epidemics: will Ebola be our game changer?

What must we learn from our collective response to the devastating Ebola epidemic in West Africa if we are to have any hope of ensuring ‘healthy lives for all’ by 2030? 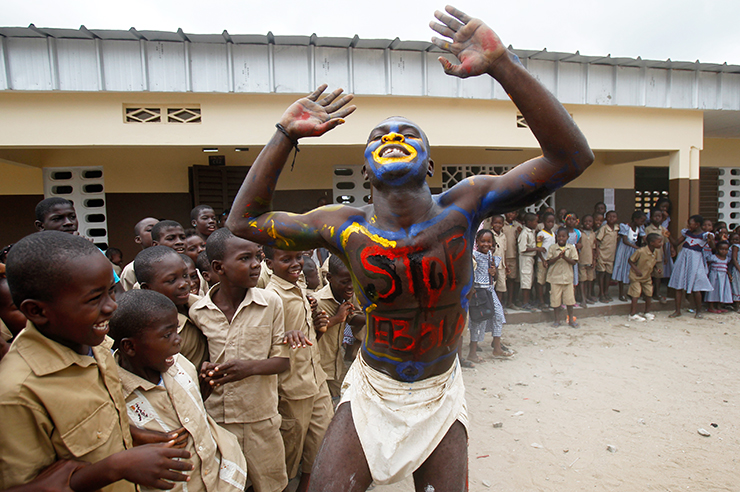 An actor, playing the role of a vaccine against Ebola, performs at a school in Abidjan, Ivory Coast during an awareness campaign. Effective response to epidemics requires the affected communities to have a good understanding of, and to be able to dispel, the myths and rumours surrounding the disease.
© Luc Gnago/Reuters

Global response to epidemics: will Ebola be our game changer?

What must we learn from our collective response to the devastating Ebola epidemic in West Africa if we are to have any hope of ensuring ‘healthy lives for all’ by 2030?

At the peak of the West Africa Ebola epidemic, infected people died in the streets, abandoned by their families. Others died in crowded Ebola care centres, with scant relief provided by solely palliative care. As a medical humanitarian NGO, Médecins Sans Frontières (MSF) found itself at the vanguard of this response – but by default. The disastrous delays in international mobilisation dictated our position.

The Sustainable Development Goals (SDGs), like the Millennium Development Goals (MDGs) before them, set ambitious targets for protecting people’s health. Yet their silence on short and medium-term capacity to respond to epidemics sets them up to fail. For when affected countries cannot bear the burden of response themselves, support must be forthcoming. Epidemics are a symptom of weak health systems, and everyone agrees we must strengthen these systems – this just does not happen overnight.

In 2014/15, the West African countries affected by Ebola had long been the focus of efforts to this end. Not one of them withstood the rigours of this outbreak. At a minimum, this raises questions on the real-world outcomes of current approaches to health system development. It certainly proves that, for the foreseeable future, developed nations must remain prepared to intervene.

Today, we have a paradox. We can send astronauts into space, map the human genome and prove the existence of the Higgs boson subatomic particle. But collecting ourselves to control the deadly spiral of Ebola in West Africa? This has proved beyond us.

Affected countries should have called for external support earlier, as soon as national authorities realised they could not contain outbreaks. More critically, non-affected countries should have offered and delivered rapid, direct support. Instead, they froze trade, closed borders and focused on domestic security concerns. Ebola was not primarily a failure of means. It was a stark failure of any political will to act.

Health and security: a hollow marriage of convenience
While outbreaks of SARS, H1N1 and MERS caused alarm prior to the West Africa Ebola epidemic, the severity and human toll of Ebola gave the world a terrible fright. A more enduring sense of urgency was born, with an ongoing focus on epidemic preparedness. Ebola also served to weld health and global security together. This focus on security has given implementation of International Health Regulations (IHRs) more traction, strengthening disease surveillance and outbreak alert systems.

On the flipside, however, Ebola also illustrated that non-affected countries only responded to an uncontained epidemic when they felt threatened themselves. Strong surveillance and alert systems lose their value entirely if they do not go hand in hand with rapid emergency response. A missing or delayed response is equivalent to installing smoke detectors without any means to put out the fire.

Our global interconnectedness means that making everybody healthy depends on making each of us healthy. Or, to be a little starker with the facts, we are only as safe as the most fragile states. And Ebola clearly demonstrated that we cannot disconnect individual patient care from collective care.

We cannot just quarantine people and hope for the best. People went underground in 2014 and 2015 and the virus spread apace. One of the main lessons of the West Africa Ebola crisis, for MSF and for everyone involved, is that epidemics start and stop in communities. Communities must be at the centre of the response: from earning the trust needed to dispel the rumours and myths surrounding the disease to giving local authorities their rightful role in orchestrating interventions.

Today, the global health security architecture is focused on reform, preparedness, collaboration and funding. Which all bear relevance. But this convenient coupling of health and security focuses on the mechanisms of preparedness alone. To guarantee results, the paradigm must change to incorporate response – a concrete, direct response to the medical needs of affected communities. Global health security requires the delivery of aid where aid is needed.

In the spotlight – still?
The West Africa Ebola epidemic will likely be the poster child for such public health emergencies for years to come. It is widely considered a wake-up call for rapidly evolving, deadly global health threats. Evaluating the response to Ebola of the World Health Organization (WHO) for the Ebola Interim Assessment Panel, Barbara Stocking characterised the emergency as a “defining moment for the health of the global community”.

Yet two years down the road, the sense of urgency has waned. The full legacy of Ebola – concrete preparedness and response to pandemics – remains unharnessed. What will it take?

Permanently in the shadows
And while the 2014/15 Ebola outbreak might not have captured the world’s attention soon enough, most other epidemics never catch it at all. Examples include the perennial measles outbreaks that take place in protracted crises such as in the Democratic Republic of Congo (DRC) and Central African Republic, and the yellow fever epidemics that struck in Angola and the DRC in 2016.

Last August, MSF vaccinated 710,000 people in Kinshasa in response to the DRC’s yellow fever epidemic, deploying international staff from 19 countries and dozens of Congolese staff. Two months before that, we vaccinated 350,000 people against yellow fever in Matadi, DRC. This is just a small glimpse of what it takes to bring one epidemic under control in a single country.

Courage to declare and will to prepare
Even if international support is available for the next big epidemic, affected countries must be prepared to formally declare outbreaks. This is the trigger for emergency funding, the release of health commodities such as vaccines, and the deployment of external support. Faced with the economic risk of travel and trade restrictions, and the political risk of being branded a pariah nation, countries will continue to delay declaration if they do not have positive incentives to do so.

Epidemic preparedness also means having the right tools ready to deploy before outbreaks begin. This entails working to develop and adapt new vaccines, treatments and rapid diagnostic tests and making them accessible and affordable to everyone who needs them during health crises. Research and development initiatives triggered by Ebola include the WHO ‘Blueprint for action to prevent epidemics’ and the Coalition for Epidemic Preparedness Innovations (CEPI).

If the outcomes of these initiatives meet these criteria for people the world over, they could demonstrate that industry, philanthropy, governments and NGOs can indeed work together to develop urgently needed, lifesaving tools. We cannot stop outbreaks from happening, but we can prevent them from becoming pandemics.

Responding to epidemics is about preventing the preventable. However sensible our long-term development objectives may be, communities continue to suffer from deadly outbreaks of disease when the systems meant to protect them are simply unable to cope. With their eyes fixed on the horizon, the MDGs failed to see the problems at their feet. The Ebola chaos ensued.

To right that wrong, the 2030 Agenda for Sustainable Development must incorporate the full scope of measures required – both prevention and response – to deliver what is promised: protecting people’s health.