Gender equality as the means and the end

The SDGs will not be achieved without establishing global equality for women. While governments are making progress, much remains to be done 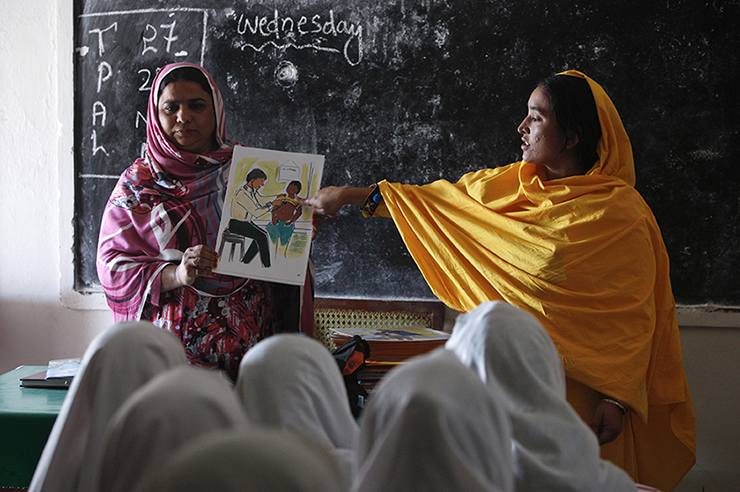 Teachers at a school in Johi, Pakistan describe preventive measures to avoid sexual harassment during medical examinations. These lessons are viewed as ground-breaking in deeply conservative rural Pakistan
© Reuters/Akhtar Soomro

Gender equality as the means and the end

The SDGs will not be achieved without establishing global equality for women. While governments are making progress, much remains to be done

Making progress on gender equality could scarcely be more urgent. Globally, one in three women experiences physical or sexual violence in their lifetime, mostly by an intimate partner.1 The global gender pay gap remains at a stubborn 24 per cent. Women make up only around one in five parliamentarians worldwide. And millions of women and girls lack access to even basic levels of social protection, healthcare, water and sanitation. While all regions have made some headway, it is not enough. No country in the world has achieved gender equality.

The visionary 2030 Agenda for Sustainable Development, adopted in the same year that the UN marked its 70th anniversary, set out to make transformative change.2 The new framework is remarkable for being comprehensive, universal and grounded in human rights. It builds on existing commitments to gender equality, such as those contained in the Beijing Platform for Action and the Convention on the Elimination of All Forms of Discrimination against Women (CEDAW).

A key recognition of the framework is the centrality of gender equality, made explicit in the fifth of the Sustainable Development Goals (SDGs) – “achieve gender equality and empower all women and girls” – as well as in the related targets that are threaded through the other 16 goals. The SDGs address a host of issues confronting our world today, including violent conflict, environmental degradation, recurrent economic and humanitarian crises and spiralling inequality.

The 2030 Agenda advances progress achieved thus far by tackling the structural underpinnings of gender inequalities. This commitment goes beyond SDG 5. Because advancing equality for women is crucial to the achievement of all the SDGs, gender-specific targets are integrated throughout the framework.

Eliminating poverty depends on women’s (and men’s) access to decent work with equal pay. Food security will only be achieved if women farmers are supported and empowered, and if women and girls have secure access to adequate and nutritious food. And it will not be possible to achieve universal education without ensuring that every girl can go to school – and stay there until she has completed her education.

Specifically, gender dimensions are addressed in the SDGs in the areas of poverty, hunger, health, education, water and sanitation, employment, reducing inequalities within and among countries, safe cities, and peaceful and inclusive societies.

The challenge now is to ensure that the SDGs are successfully implemented and monitored. Foremost, we need to have the right laws in place to guarantee gender equality, to eliminate direct discrimination against women, and to outlaw egregious human rights violations such as violence against women. But in addition to laws, a much broader set of policies and enabling conditions is needed to implement the SDGs. To ensure women can enjoy their human rights in practice, they also need what CEDAW calls “substantive equality”.

Drawing on experience from all over the world, UN Women’s flagship report – Progress of the World’s Women 2015-2016: Transforming Economies, Realizing Rights – outlines a comprehensive policy agenda to help us achieve this substantive change.3

One of the main insights of the report is that social and economic policies need to work in tandem. Typically the role of economic policies is seen primarily in terms of promoting economic growth, while social policies are supposed to address its ‘casualties’ by redressing poverty and reducing inequality.

But economic policies can pursue a broader set of goals, including gender inequality and social justice. Conversely, well-designed social policies – such as family benefits, pensions, as well as health, childcare and water and sanitation services – can enhance economic dynamism by building human skills and capabilities, and providing the economic security needed to enable employment and entrepreneurship.

Implementation
This is not theoretical; there are many countries across all regions that are implementing elements of this agenda. For example, in Brazil, the extension of social protection and labour rights to domestic workers, as well as policies to encourage small and medium-sized enterprises to formally register with the government, contributed to a 14 per cent increase in formal employment between 2002 and 2012. In Rwanda, the rapid roll-out of community-based health insurance has reduced the share of women who report lack of money as the main barrier to accessing healthcare, and has increased skilled birth attendance and women’s use of modern contraceptive methods. As a result, maternal mortality rates have fallen much faster than in the rest of sub-Saharan Africa.

Of course, these policies need to be financed, but many governments recognise that they are sound investments and are finding innovative ways to raise the necessary resources. Bolivia and Botswana are among the countries that are using revenues from natural resource extraction to fund universal social pensions, which help to ensure that women – many of whom have spent a lifetime caring for others on an unpaid basis and thus are excluded from contributory pension systems – can live out their older years in dignity.

In addition to the right mix of policies, we need strong monitoring systems in place to track progress, gaps and challenges in implementation. This requires significantly increased investment in gender statistics to provide the evidence base for how the SDGs are benefiting women and girls on the ground. Robust evidence informs the development of policies and is also an important tool for civil society to hold decision-makers, including governments, to account.

Political will
Sustaining and further bolstering political will for action is essential. Civil society actors, including social and women’s movements, but also the United Nations Associations around the world, have been critical partners in achieving an ambitious framework for the SDGs, including by demanding a strong standalone gender goal. We will continue to rely on all of you to call governments to account for action.

Heads of state and government from 90 countries have already announced their ‘stepped-up’ commitments to achieve gender equality.4 And some 144 countries supported the Global Leaders’ Meeting for Gender Equality and Women’s Empowerment: A Commitment to Action on 27 September 2015. There is much to be done to achieve gender equality and we must all work together to make it happen.

Decades of important normative advances at the UN have firmly established that gender equality and the realisation of women’s and girls’ human rights are fundamental for achieving human rights, peace and security, and sustainable development for all. Alongside existing human rights commitments, the SDGs provide the framework we need to galvanise action. Together, let us commit to and achieve Planet 50 –50 by 2030.