Key to making the SDGs a reality will be identifying – and then generating – the level and type of financing required across the international community. How can this best be achieved? 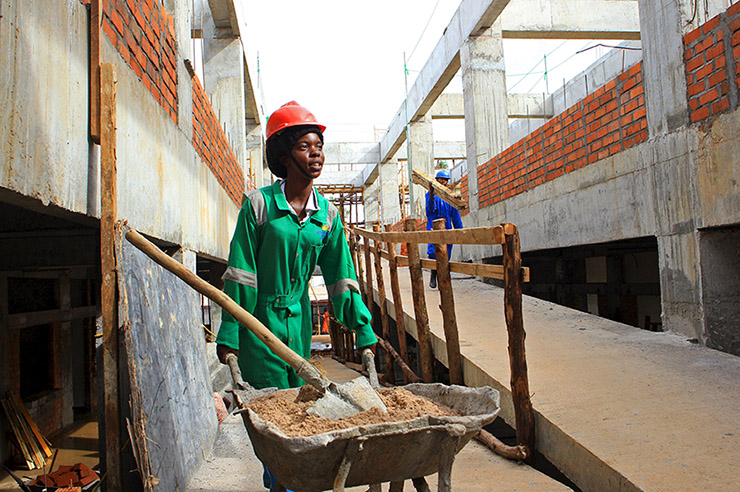 Construction of a new hospital in Hoima, Uganda, which has benefited from an influx of investment on the back of the discovery of major oil reserves in Lake Albert  © Reuters/James Akena

Key to making the SDGs a reality will be identifying – and then generating – the level and type of financing required across the international community. How can this best be achieved?

On 25 September 2015, world leaders adopted the 17 Sustainable Development Goals (SDGs) that set ambitious quantitative objectives to be achieved by all countries – rich and poor – by 2030. The goals are underpinned by 169 targets and a yet-to-be-determined number of indicators. It is a huge, complex agenda that has been developed through an unprecedented international consultation and transparent negotiations. Now the world must embark on making the goals a reality.

Some critics charge that the targets are unwieldy and far too numerous, but member states have wisely resolved that the targets should be tailored and adapted to country circumstances.1 The international discussions should therefore focus on the 17 goals, which are clearly worded – or as clearly as one might hope for in an intergovernmental negotiation involving 193 states. Each goal comprises quantitative, time-bound objectives that must be taken seriously as operational milestones to be achieved in every country. This in turn raises the question of how much it might cost to achieve the goals and how the necessary investments can be financed.

When the Millennium Development Goals (MDGs) – the predecessors to the SDGs – were first promulgated in 2001, a year after the Millennium Declaration was adopted at the UN, they triggered a lively and sometimes acrimonious debate on whether one could or should estimate the cost of achieving international goals. I led the UN Millennium Project’s effort to estimate resource needs for the MDGs and was deeply involved in these debates.2 The issue of whether needs assessments are a useful tool for operationalising global goals is far from settled, as illustrated by several recent discussions that pit needs assessments and the public investments they quantify against economic growth or policies.3

Yet these choices are false ones. In my professional experience all practitioners and serious analysts agree that to generate economic growth and achieve ambitious outcome objectives for social services, infrastructure and environmental sustainability (as outlined in the SDGs), countries require at least four complementary elements:

Each area needs to consider the investments required to reduce greenhouse gas emissions and mitigate the effects of climate change. Other areas include data for the SDGs and international support for humanitarian work. Together, these areas describe all the investments needed to achieve the 17 goals – including cross-cutting objectives such as eliminating poverty and inequalities and establishing gender equality – with the exception of business capital.

Under the MDGs, there has been great progress in areas such as health, education and access to basic infrastructure in understanding how ambitious long-term goals can be achieved and how to quantify and programme the underlying investments. Such needs assessments have become widespread and have grown in sophistication, particularly in the health sector.

Yet, in some areas, available needs assessments require substantial improvement, and all need to adjust to the shift from MDGs to SDGs, which require a greater focus on private financing, domestic resource mobilisation, and non-concessional international finance. Concessional international public finance, including official development assistance (ODA), is becoming less important quantitatively, but will continue to play a vital role in the poorest countries and for global public goods.

The most detailed evaluation of available needs assessments for the SDGs suggests that incremental financing needs for the SDGs are quite manageable at around two per cent of world GDP. A significant share – likely more than 50 per cent – of this financing can and should be mobilised by the private sector. Most of the remainder can be covered through expanded domestic resource mobilisation by governments in developed and developing countries alike.

Incremental investment needs in low-income countries will be in the order of $400 billion per year of which some two thirds can be mobilised domestically and through private sources. Just over $150-160 billion will be required in incremental international financing to the poorest countries, of which only a share will need to come in the form of concessional public finance, including ODA.

Four key areas
This work yields four preliminary lessons and policy conclusions. First, meeting the SDGs is not primarily a financing challenge. Yes, incremental financing needs of $1.4 trillion in low- and lower-middle-income countries are substantial, but they can be financed if governments set the right policy frameworks to mobilise private investments, and domestic as well as international public resources are mobilised for long-term investments in sustainable development. This raises important and difficult questions of organisation that must be tackled in each investment area, but meeting the SDGs remains first and foremost a moral challenge, as the Pope has expressed powerfully in his recent encyclical Laudato si’. Or, in the parlance of international diplomacy, the question is whether countries will pursue the global partnership they have agreed to solemnly in New York.

Second, different sectors have different financing needs and different opportunities for mobilising public and private financing. These must be understood clearly to avoid comparing apples with oranges. For example, the health sector will require overwhelmingly public financing to ensure universal health coverage, whereas infrastructure finance will take a large share of its funding from the private sector. So the Multilateral Development Banks’ recent call to shift the discussion from billions to trillions applies only to infrastructure finance.5

Incremental financing needs for health, education and other SDG priorities will be at least one order of magnitude smaller. Some will require overwhelmingly public financing, while others, such as agriculture, can attract a large share of private investment. Each sector and every country will need to analyse its financing needs and determine how the necessary funding can be mobilised.

A third lesson is that financing the SDGs will require a substantial increase in government resource mobilisation. The challenge is particularly acute in poorer countries where tax revenues can be extremely low and will need to rise rapidly. The international community must help by supporting the strengthening of countries’ tax collection systems, but also by curbing international tax evasion, money laundering, and the use of non-transparent offshore companies.

An estimated $220–260 billion in international public finance will be required to meet the SDGs. More work is needed to determine how much of this incremental financing will have to be concessional. As a ballpark estimate, the international community will probably need to roughly double the volume of international concessional public finance to meet the SDGs. This increase is less than developed countries’ commitment to increase ODA to 0.7 per cent of their gross national income, and the financial burden will become lower if it is spread across all high-income countries – regardless of whether they are members of the Development Assistance Committee of the Organisation for Economic Co-operation and Development. Most likely, some of today’s upper-middle-income countries will also provide increased volumes of concessional international financing.

Finally, a lot more analytical work is needed to strengthen our understanding of how the SDGs can be met and financed. Needs assessments in many areas – particularly food security and agriculture, social protection, infrastructure and ecosystems – lack the clarity and robustness required to mobilise incremental resources and achieve the goals. Results from better needs assessments can then be mapped against systematic assessments of private and public financing flows to identify financing gaps and to track the effectiveness of investments.

We are in an immeasurably better situation than in the early 2000s when virtually all thematic communities lacked a robust understanding of the investment needs for their sector and how they might be financed. Much has been accomplished since then and the remaining knowledge gaps can be filled over the coming years. This will enable every community and every country to take a hard look at how the necessary investments in the SDGs can be financed. It will allow the world to truly embark on the journey to achieve the SDGs.

With its emphasis on transparency and fairness, Islamic finance has much to offer any economy, and Africa, with its bright economic prospects and relatively unbanked population, is a continent in which we at the ICD can do an enormous amount of good.

Our aim, and the aim of our parent organisation the Islamic Development Bank, is to encourage development through access to fair finance, making our mission entirely aligned with the UN’s Sustainable Development Goals (SDGs).

At the heart of the SDGs is a commitment to end poverty, protect the planet and ensure prosperity for all. The Islamic finance principles of financial stability, financial inclusion and shared prosperity are in perfect harmony with the SDGs of ensuring food security, healthy lives, gender equality, resilient infrastructure, shelter, as well as helping build peaceful and inclusive societies.

Our commitment to helping foster Islamic finance in Africa can only help further those SDGs across the continent. And, as Boston Consulting Group points out, Islamic finance is not just for Muslim countries, or Muslims. Like any fair and efficient financial system, it can empower any community.

We have operations in more than 20 African countries. We advise on sukuk issuances and help finance infrastructure projects. We are also a major investor in the banking sector, running Tamweel Africa, a consolidated Islamic banking group that operates across West Africa.

Despite their importance to economic output, market conditions and regulatory environments do not always support SMEs. Islamic finance can help fill this gap, with Sharia-compliant solutions complementing the debt-financing products that are becoming available to African SMEs.

Africa is full of potential. By 2040 it will be home to one fifth of the world’s young people with a larger labour force than China. It has more than half of the world’s uncultivated land and access to a huge amount of natural resources.

By helping to develop strong and dynamic banking networks offering fair, flexible and ethical financing solutions, we are playing an important role in the development of a continent that has so much to offer.