From principles to action

A year on from the birth of the SDGs, governments have reaffirmed their commitment to them in various national plans and international agreements. But achieving the Global Goals will also require a fundamental shift in all our behaviours if we are to truly create a world where no one is left behind 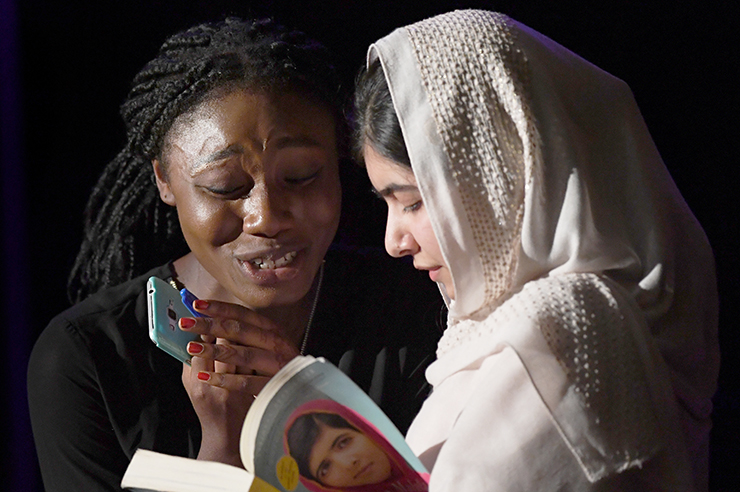 Malala Yousafzai signs her book for a student during a visit to Denver South High School, USA. Advocacy will be critical to success, guiding individuals and organisations to align their activities with the 2030 Agenda.
© RJ Sangosti/The Denver Post via Getty Images

From principles to action

A year on from the birth of the SDGs, governments have reaffirmed their commitment to them in various national plans and international agreements. But achieving the Global Goals will also require a fundamental shift in all our behaviours if we are to truly create a world where no one is left behind

By David Nabarro, WHO Director-General’s Special Envoy on COVID-19 Preparedness and Response

Universality, interconnectedness and inclusivity. Grounded in these principles, world leaders adopted in September 2015 a far-reaching and people-centred blueprint for action towards human development: the 2030 Agenda for Sustainable Development.

The agenda – containing the 17 Sustainable Development Goals (SDGs) and 169 targets that relate to them – was formulated through one of the most open, transparent and inclusive consultative processes in history.

It is a political manifesto for the world over the next 15 years. Alongside the Paris Agreement for climate change, the Sendai Framework for Disaster Risk Reduction and the Addis Ababa Action Agenda on financing for development, it represents a major turning point in the global effort to tackle development challenges and respond to climate change. Together, these agendas constitute a truly transformative plan for people, planet, prosperity, partnership and peace.

The SDGs cut across all three pillars of the UN’s work – peace and security, development and human rights – integrating and underlining the need to equally balance the social, economic and environmental dimensions of sustainable development.

Since its adoption, the 2030 Agenda has served as a new incentive for national and international action. The world now has the tools to ensure that people and the planet thrive. By ending poverty and hunger: reaching the most vulnerable first. By prioritising human rights: addressing injustice in all its forms and empowering women and youth. And by building resilience and tackling the impacts of adverse climate events. Actors from all spheres of society have been engaged in the promotion and implementation of the SDGs, including governments and parliaments, civil society, businesses, trade unions, citizens and the academic and scientific communities. Rapid progress on many fronts has already been reported.

Heads of state and government have displayed strong political leadership to drive national implementation of the 2030 Agenda. While it took three years for countries to start acting on the Millennium Development Goals (MDGs), within the first year of the adoption of the SDGs, approximately 50 heads of state have created inter-ministerial committees dedicated to the monitoring and implementation of the 2030 Agenda and adopted national frameworks aligned with the 17 goals.

Twenty-two UN Member States sent a powerful message when, not even a year after the adoption of the 2030 Agenda, they presented their national voluntary reviews at the 2016 High-Level Political Forum. These set out how they intended to integrate the SDGs into their national strategies and budget processes.

A broad range of national and international actors, including UN organisations, have contributed to unprecedented outreach efforts through traditional and social media, and various international, national and regional events, initiatives, partnerships and alliances. These awareness and advocacy campaigns have brought the general public’s knowledge of the SDGs to a much higher level than the MDGs after just one year.

Our early perceptions are that the private sector, including leading international businesses, have already turned the SDGs into action and innovation globally, and used the 2030 Agenda as a platform to  drive investments and growth. While more companies, investors and financial markets need to integrate the SDGs into their own strategies and operations, many financial actors and institutions are now starting to develop solutions to help attract private capital.

The international community’s commitment to the 2030 Agenda has also been strengthened throughout the last year, as the pivotal role of the SDGs has been highlighted in tackling today’s biggest challenges such as climate change, humanitarian crises, refugees and migration.

A year on since its adoption, the Paris Agreement has been signed by 194 governments, making them Parties to the UN Framework Convention on Climate Change, and ratified by 116 Parties, accounting for nearly 80 per cent of global greenhouse gas emissions. In May 2016, the G7 discussed the implementation of the 2030 Agenda and the need for a global partnership involving a range of stakeholders, including the private sector and civil society, while the World Humanitarian Summit was unequivocal in confirming the SDGs and a desire to ensure that no one is left behind.

The New York Declaration – signed by 193 UN Member States at the UN Summit for Refugees and Migrants in September 2016 – connects development efforts to humanitarian action, human  rights and the advancement of peace. It is critical for the success of the 2030 Agenda, as there can be no sustainable development without peace, and no peace without sustainable development.

Changing the way we think
Yet, the road to 2030 and a world free of poverty and hunger will be long and arduous. The SDGs require that we all change the way we think about development. We must place innovation at the centre of our work. Innovative thinking, innovative models as well as innovative mechanisms and partnerships must emerge, where all stakeholders – government, business, civil society, citizens, the UN system and others – can come together in a meaningful way.

World leaders have committed to shifting from managing crises to proactively reducing risks and vulnerabilities. That is not easy, as it means placing prevention at the heart of all efforts. We need to emphasise the synergies between policies, programmes and institutions, and align actions – including between the SDGs, the Paris Agreement, the Sendai Framework and the Addis Ababa Action Agenda.

We need major efforts to engage local governments and ensure greater local action and capability, breaking horizontal and vertical silos. We must also make extra efforts to attract, leverage and mobilise investments of all kinds – public and private, national and global – in alignment with the 2030 Agenda. Financing collective outcomes, based on timelines measured in years, should become the norm, rather than funding individual projects with short-term effects.

Most importantly, advocacy campaigns must reach more people. Information and understanding of sustainable development will allow individuals and organisations to align their activities with the 2030 Agenda.

To support countries and communities, the UN is reaffirming itself as a beacon of hope in a world shaken by uncertainty. New mechanisms must be set up to ensure greater accountability and effective evaluation processes. Embracing complexity and recognising the interlinkages between today’s major challenges will be key to realising the 2030 Agenda.

At a time when many people have low levels of trust in their institutions, are worried about social unrest, and fear growing instability and violence, the SDGs and the Paris Agreement have opened a new pathway for peace and prosperity, guided by a single principle: to leave no one behind.

Whether government official or civil-society activist, business or community leader, entrepreneur, innovator, scientist, researcher, UN staff or faith community member, we must all get involved and take responsibility. Transforming our world will depend on how each of us will respond to this call to action, and move from agreement to implementation.