Freeing the world of infectious diseases

An interview with Dr Jerome Kim, Director General of the International Vaccine Institute 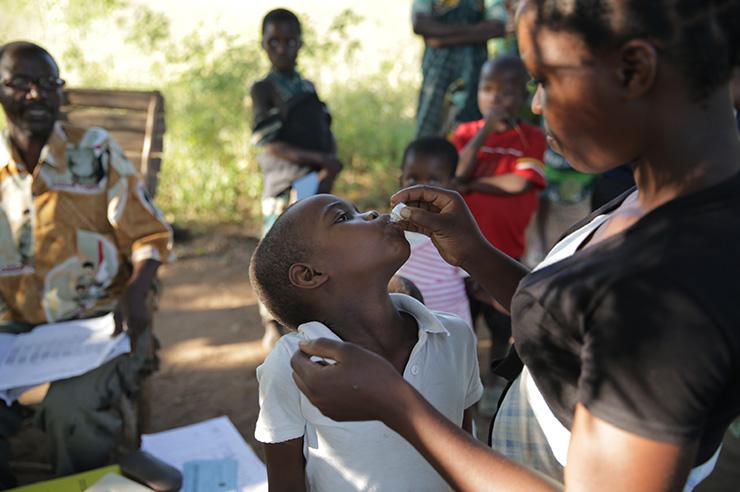 IVI, with the Malawi Ministry of Health, WHO, Korean Ministry of Foreign Affairs and other partners, conducted vaccinations in Nsanje, Malawi to curb a cholera outbreak as a result of massive flooding in early 2015. The oral cholera vaccine used in the campaign was developed by IVI

Freeing the world of infectious diseases

An interview with Dr Jerome Kim, Director General of the International Vaccine Institute

“Our vision has always been to see a world free of infectious diseases. And it’s our mission to discover, develop and deliver safe, effective and affordable vaccines,” says Dr Jerome Kim, Director General of Seoul-based non-profit international organisation, the International Vaccine Institute (IVI).

Before leading IVI, Kim was developing vaccines himself. He’s a former colonel in the US Army Medical Corps where he ran a laboratory developing an HIV vaccine. He doesn’t, however, appear to be missing the lab.

“Leading IVI is the biggest and most exciting challenge I’ve ever worked on,” he says. Besides charting IVI organisationally and scientifically, he is an advocate, convincing governments, agencies, donors and pharmaceutical companies on the benefits of vaccine uptake and research.

What are his priorities? There are diseases that infect millions of people each year that are without useable vaccines, he says. The big three are HIV, TB and malaria. Vaccines for those would have the highest “overall impact on mortality.”

“Recently a malaria vaccine was approved,” he says. “So is that a cause for celebration? Perhaps, but there is still a lot of work to be done. We have effective and approved vaccines that aren’t being fully utilised in the rest of the world.”

Examples include rotavirus, cholera and the pneumococcal conjugate vaccine that protects against Streptococcus pneumoniae. There is also the pentavalent vaccine, which bundles five paediatric vaccines together and protects against diphtheria, whooping cough, tetanus, Haemophilus influenzae type B (a bacteria that causes meningitis, pneumonia, otitis) and hepatitis B.

“If you want immediate impact, it would be with those kinds of vaccines,” he says. “With newer vaccines, typhoid would be a relatively easy disease target. There are maybe 100,000 to 200,000 deaths and 20 million infections per year. The impact of diarrhoea in the developing world is tremendous.” Once the new typhoid conjugate vaccines are tested and approved, vaccination would do a lot very quickly.

IVI’s strategy is clear: advocate for research and development of vaccines against diseases of global health importance, work with manufacturers to make vaccines accessible for developing countries, and work with countries to increase the uptake of vaccines against diseases that exert a large public health burden. But it isn’t just advocacy and partnerships. IVI conducts research, develops vaccines, and facilitates their delivery in the field.

Recently it has had a notable success in the field of cholera. “We are one of the only not-for-profit organisations funded by the Bill & Melinda Gates Foundation to have moved a vaccine from clone to clinic,” says Kim. IVI was instrumental in the development and approval of a cholera vaccine. For more than five years, it has been working with manufacturers to produce it. Currently it has four suppliers. “Soon, there will be enough cholera vaccines for us to start trials to gauge its effectiveness on large populations.” IVI will use the results to encourage governments to implement mass vaccination programmes.

This work requires money and support. IVI is primarily funded by the Republic of Korea, Sweden and the Bill & Melinda Gates Foundation. Germany and Kuwait have provided funding, and there are current talks with India.

It also has 35 countries and the WHO as signatories, which have expressed their support for the IVI by signing its Establishment Agreement. However, countries such as the US and UK aren’t on the list.

“It would be nice to get a G7 country to sign up,” he says, as this would be an important symbol of commitment to global health. It would make an even bigger difference, if they move from being a signatory to a donor, so Kim will continue to state the IVI proposition – the need for an international organisation dedicated to finding vaccine solutions for the developing world.

“We will never give up. This is something we are committed to as an organisation, and IVI would welcome partners in the search for additional low-cost and effective vaccines.”