What do the SDGs mean in a country that is falling apart? Whose responsibility do they become if a state is unwilling or unable to live up to that responsibility? 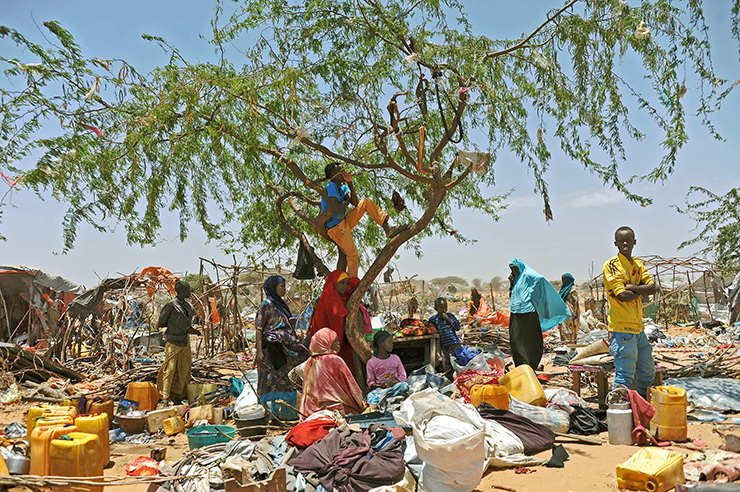 Somali refugees after their temporary shelters were destroyed by government soldiers at the Sarkusta refugee camp in southern Mogadishu. Somalia has been in a state of civil war since the dictator Mohamed Siad Barre was ousted in 1991. © Mohamed Abdiwahab/AFP/Getty Images

What do the SDGs mean in a country that is falling apart? Whose responsibility do they become if a state is unwilling or unable to live up to that responsibility?

Instability is, by its very nature, unsustainable and so the questions above may seem strange ones to ask. One might consider that restoring a state to a level of stability should be a priority, and that the Sustainable Development Goals (SDGs) represent an agenda which can only be implemented once a crisis has passed.

But with the World Bank indicating that two billion people live in countries where development outcomes are affected by fragility, conflict and violence – and that by 2030, the share of global poor living in fragile and conflict-affected situations is projected to reach 46 per cent – it is simply not a question we can wait to answer. If the sustainable development agenda cannot be implemented in areas of fragility, then – in this increasingly fragile century – it simply will not be implemented.

Of course, this is reflected in the SDGs. Goal 16 specifically talks about promoting peace and justice. SDG 10 recognises the importance of inequality in driving instability. SDG 9 recognises that without infrastructure, development will falter. But the links to conflict and stability do not stop there. It should be self-evident that war drives poverty, that education is made more difficult when schools are destroyed, and, indeed, that state fragility has an impact on every single goal.

It is clear that implementing the SDGs in fragile contexts is an integral part of the push to meet our global targets. But if we look at the most fragile states we see that they are frequently those left behind by the global development agenda.

Last year Gary Milante, Director of the Stockholm Institute’s Security and Development Programme, argued persuasively in these pages that the term ‘fragile state’ may have outlived its usefulness, but that the concept of fragility had not (see www.sustainablegoals.org.uk).

This list ably demonstrates the circular nature of the relationship between fragility and the goals. Not only does fragility hamper development, but insufficient or uneven development increases fragility. It is somewhat moot to consider which is cause and which effect. More important is the vicious feedback loop that is thus created.

Fragility is on a spectrum, and it may not be a useful exercise to divide states neatly into categories of fragile and not fragile. But looking at the countries that are universally recognised as the most fragile, we see that they are almost universally among the least developed countries.

And this is without considering the clearly fragile and underdeveloped regions, such as Western Sahara, that are under the de facto control of authorities that don’t have international recognition. Furthermore, as we have seen in West Asia, fragility spreads. This is a challenge the goals must meet.

Implementation in a time of fragility
The implementation strategy for the goals envisages a partnership between the state, the UN, civil society and the private sector. State fragility causes problems for all four partners and for the relationships between them. Many of these are self-evident.

The current situation in Syria has shed light on others, such as the difficulty the UN faces in delivering aid when doing so requires interacting with a number of different partners with varying degrees of legitimacy and territorial control. Another difficulty is the tension caused between the need to maintain good relations with state and non-state actors (and thus access for humanitarian supplies) and the need to apply political pressure on those actors to push them towards a lasting and stable solution.

This is a conundrum the UN has long struggled with. It was discussed at length in the report by the Internal Review Panel, headed by Charles Petrie, on UN actions in Sri Lanka. In response, the then Secretary-General Ban Ki-moon launched the ‘Human Rights up Front’ initiative, which seeks to ensure that human rights will never again be sidelined for humanitarian reasons. But the broader questions Petrie raised around the tensions between access and pressure remained largely unanswered, and are perhaps unanswerable except on a case-by-case basis.

The approach of the UN, and most donors, in such circumstances has been to implement what development it can, when it can. As a result, development in these areas frequently displays a lack of strategy, and is rarely linked to the advancement of the SDGs.

This is understandable in times of crisis. But when crises show no signs of abating, this approach cannot be maintained indefinitely. In Syria, it took both the UN and civil society too long to move out of crisis management mode and develop long-term thinking. It took nearly five years to establish a forum for coordinating humanitarian responses (the Whole of Syria Inter-Sector/Cluster
Coordination Group established in January 2015).

A stronger emphasis on development within fragile contexts will inevitably bring increased risk to delivery agencies, and further legitimise actors whose legitimacy is questionable. But, despite the risks, such an approach is required if fragile states are not to remain indefinitely left behind.

For these reasons, the approach must include a clear understanding of the wider political implications of development. The political agencies of the UN Secretariat need to be able to give a clear steer in this regard to the UN development agencies and funds, and to other implementing partners.

Rebuilding institutions and footing the bill
The key to reducing fragility in the long term is to develop lasting institutions. However, some would argue that when it is the institutions themselves that are spearheading the oppression of the people, their destruction is a precondition for development. This was an important, if ancillary, line of reasoning behind several recent ‘humanitarian’ interventions. However, institutions are far easier to destroy than they are to rebuild. In last year’s issue of this publication, Andrew Rathmell and Arthur Mellors explained why that was.

Developed nations are therefore placed in a particular position of responsibility when they dismantle the institutions of a fragile state. A case can be made that in such circumstances these nations should bear responsibility for the expensive and prolonged process of institutional restoration, and for mitigating the consequences of the absence of those institutions in the meantime.

This should be developed as a political norm, but at the current moment it is impossible to demand states live up to this responsibility. Were institutions to be destroyed as part of an aggressive war, it may soon be possible for victims to reclaim some of the costs, but only for some states and in some circumstances. As the Kampala definition of the crime of aggression is incorporated into the Rome Statute of the International Criminal Court (ICC), it may in future be possible to utilise the ICC’s Trust Fund for Victims as an enforcement mechanism.

However, this would only be the case for ICC signatories or those the UN Security Council refers. Developed nations have thus far largely escaped the attention of the ICC, a state of affairs that is unlikely to change any time soon.

This makes prevention of damage to institutions all the more important. In their 2011 position paper ‘Responsibility while Protecting’, Brazil made it clear that humanitarian intervention can only be justified if the damage it causes is proportionate to the damage it prevents. As the global norms around humanitarian intervention develop, it is important that this be emphasised, and that further doctrines are established requiring belligerents to play their part in rebuilding fragile states. This is a task best undertaken under the supervision and coordination of the UN.