Are the SDGs fit for purpose to enable sustainable development in fragile contexts? 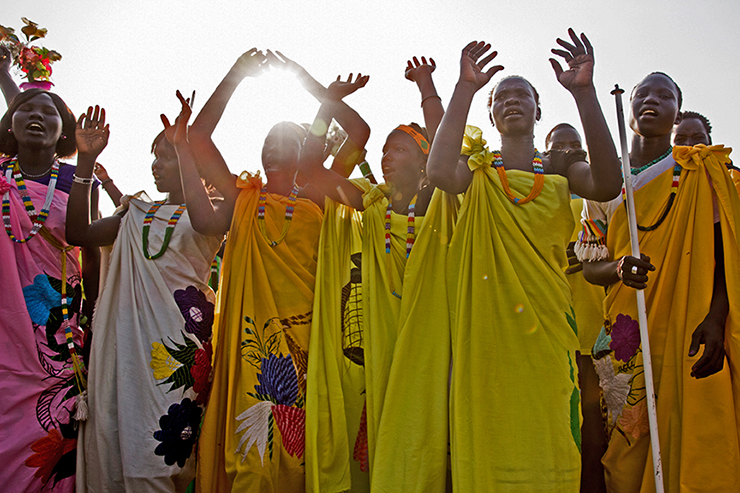 Women leaders greet the head of the oversight body for South Sudan’s peace accords, during his visit to a UN-run refugee camp in Malakal, South Sudan. The country has been riven by a civil war that started only two years after it gained independence from Sudan in 2011. As part of a former British colony, South Sudan is the focus of particular development assistance from the UK. © UN Photo/JC McIlwaine

Are the SDGs fit for purpose to enable sustainable development in fragile contexts?

There was a time when development policy was driven by pro-development political movements and their resulting government coalitions– from the Soviet Union to India, Turkey and Japan – and by the theories of serious professional development economists. This era ended about 40 years ago, with an international focus on what was called a debt crisis, beginning around 1979. It replaced development economists with neoliberal economists – identified with what John Williamson called The Washington Consensus and the primary role of markets rather than the state in economic outcomes. The dominant role in development finance for the World Bank and the International Monetary Fund resulted.

One can learn a lot about power relations in the international system with a study of why the concept of a debt crisis occurred and was so labelled; what the policies imposed on poorer countries were and why; and who the driving actors of this new agenda were.

Important for us, however, is that the empirical evidence is overwhelmingly negative: these policies did not promote economic development. Indeed, some analysing the African cases referred to the 1980s as a ‘lost decade for development’.1 The dramatic declines in social welfare and government capacity, including for development policy – beginning in the 1980s in Latin America and Africa, and the 1990s in the countries of former Soviet Union and Eastern Europe – are tragic testimony to the results.

The response by the international community came in the form of the eight Millennium Development Goals (MDGs), adopted by the United Nations in 2000 with a deadline of 2015. They focused on poorer countries in the Global South and set standards for their governments’ policies based on the developed, wealthy countries of the North.

The MDGs divided development into eight separate sectoral goals. Yet there was no overall development strategy to achieve them, as originally understood by development economists and pro-development governments of the past. For some critics, the limiting of development to the goal of ending poverty was even more reductionist.

The new set of 17 UN-mandated Sustainable Development Goals (SDGs) adopted in 2014 (called Agenda 2030 after their termination point), accepted the broad critique of the MDGs for focusing only on the Global South. The SDGs are universal goals, the new agenda declared, shared by all countries regardless of their level of economic development and prosperity or poverty. Critics of the MDGs also celebrated the SDGs as an ambitious and transformative agenda that restored a concept of development as an integrated process encompassing social, economic and environmental aspects and policies and one that government policies had to design and lead. The process of defining the SDGs also gave opportunities for new voices to be heard outside of government officials, such as non-governmental organisations from the South.

First, despite the label of sustainable development, not one of the 17 SDGs actually attempts to measure development. Agenda 2030 refers to development in many places, rhetorically, but when one looks at the way the goals are measured and countries are assessed, then the targets and indicators used say nothing about how to examine the integrated process that is development.2

Second, the primary audience and focus of the SDGs is still donors and the international aid architecture, which undermines the stated ambition that development policies must be “voluntary and country-led”. External aid and aid projects do not in any way constitute a development policy for a country.

This is particularly pronounced when the Bretton Woods institutions are involved – their lack of respect for national particularities and policy choice is well documented. The North/South divide has thus not been replaced, nor the causes of the tragedies of the 1980s.

To understand what is meant by fragile contexts,3 we need to return to the World Bank and the mid-1990s. Although the concept of fragility has expanded so much since then (beyond any usefulness actually), its origins still imprint the concept. These lie with the label of failed states among American and British policy practitioners and security scholars during 1992–4, but then definitively with a World Bank task force on failed states in 1995. Facing an existential crisis because so many countries were in arrears to the Bank, Bank staff discovered that 80 per cent of country recipients of World Bank loans who were delinquent in their debt repayments were countries experiencing armed conflict.

A new agenda focused on the intimate link between security and development. It acknowledged that conflict harmed development and that development aid should also be viewed as a security imperative for these Northern donors. The World Bank led the agenda, but was soon joined by development aid donors, both acting bilaterally and collectively as the Development Assistance Committee of the Organisation of Economic Co-operation and Development.

The concept of failed states was soon replaced, for reasons of diplomatic sensitivity, with that of fragile states. In the last few years, that has in turn been replaced with the more amorphous idea of fragility and fragile contexts. But the agenda and its conceptualisation remain the same.

Despite this idea of a security–development link, no changes in the architecture of international order have occurred. The worlds of security and development, whether multilateral as the UN or bilateral, remain sharply separate organisationally, and uncoordinated. The conditions that each requires countries dependent on development aid to meet are more often than not deeply contradictory, leaving it to the countries themselves to manage the consequences.

Aid flows show that most donors avoid these countries ‘in conflict’, whether because of violence or because these countries are poor. Their explanation blames the lack of particular governmental capacities (as measured by the World Bank): their so-called ‘fragility’. But it has been well demonstrated that governmental capacities are a result, not a cause, of development.

The policies of the 1980s and 1990s still haunt this agenda. That there are exceptions for special relationships with former colonies suggests a political calculation (possibly in other cases this is down to these countries’ lack of strategic significance). In a country where security is not guaranteed, the World Bank’s aid programmes will sit on a shelf until the Bank considers conditions safe, often for many years – even if the deployment of these programmes might well contribute to building peace.

SDG 16, the goal of peace and justice, says nothing explicit about development, particularly once one looks at the targets and indicators to measure progress. The goal is also based on a widespread assumption that peace will promote development. Unfortunately, research shows that this is not the case except where government policy so aims, and that development policies can often provoke or escalate violent conflict.4

Development policy has to be addressed to the particular conditions of a country, and the ways to give each country the policy space necessary. It requires support for governmental capacities to do the planning, statistics, auditing and implementation of development policies that had great success in an earlier era. The knowledge is there; it needs to be accessed. Current global conditions would suggest that returning to a genuine respect for development policy and expertise is urgent.