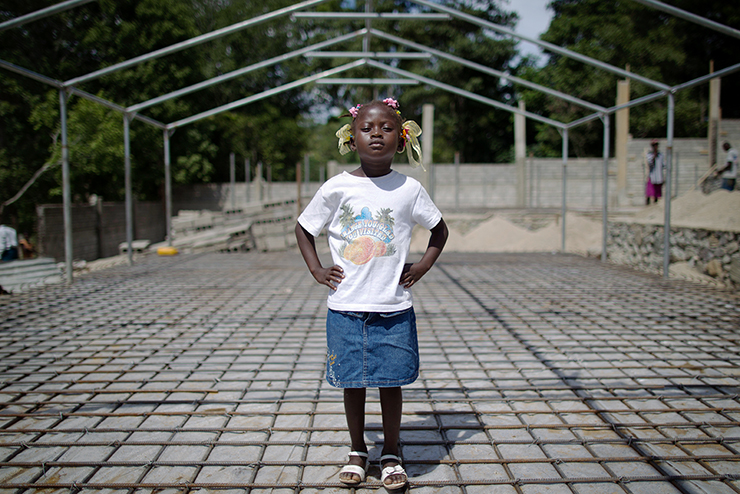 Seven-year-old Edeline Jean stands on the foundation at the construction site of the new building at Caimite National School in North Department. “I have to walk a lot to get to school, but it is not too difficult,” she said. Edeline is among the school’s 125 students attending classes in a semi-enclosed makeshift structure on the school grounds until construction on the new school is completed. UNICEF is building five new classrooms at the school – whose original building collapsed during the 2010 earthquake – as part of a school construction project in isolated rural villages. The new building will be earthquake- and hurricane-resistant and child-friendly, and will serve an estimated 400 children. UNICEF has helped build 193 semi-permanent schools, providing education in a safe and healthy learning environment, in the aftermath of the earthquake.

In December 2011, Haiti and its approximately 4.3 million children continue to recover from the 12 January 2010 earthquake that killed some 220,000 people, displaced more than 1.6 million and further disrupted the country’s already inadequate infrastructure. Progress has been substantial: a new national government is in place; about half of the mounds of rubble have been cleared; almost two thirds of those displaced by the quake have moved out of crowded camps; and the country’s health, education and other core services are being rebuilt on a stronger foundation. Still, the country remains a fragile and impoverished state, requiring international support. Working with multiple international and national partners, UNICEF continues to address the emergency needs of children, while focusing on building the Government’s capacity to uphold and sustain children’s rights. In nutrition, an unprecedented expansion of preventive and treatment services for childhood under-nutrition has begun to address the pre-quake ‘silent crisis’ of chronic malnutrition. In health, routine child immunizations increased to