Far from being the ‘great equaliser’, COVID-19 has exposed deep structural inequalities, with profound human rights implications. What lessons can the international community take forward to tackle the injustices in our societies? 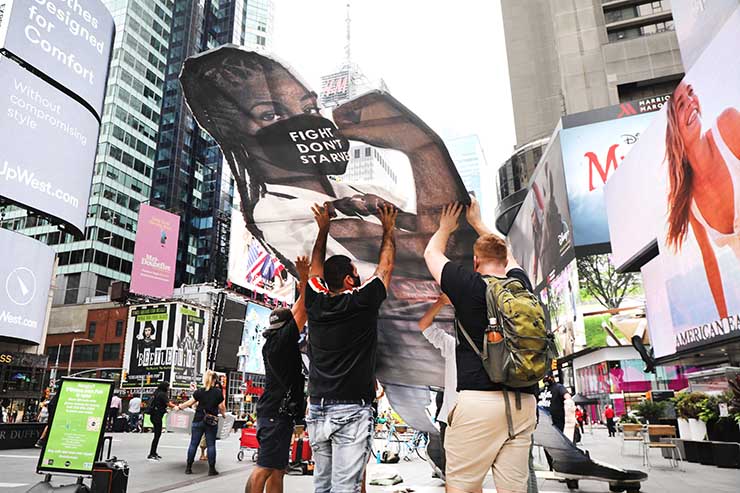 Activists raise a statue to ‘Elena the Essential Worker’ at a demonstration in Times Square, New York, to demand a ‘fair wage’ for tipped workers during the pandemic. © Spencer Platt/Getty Images

Far from being the ‘great equaliser’, COVID-19 has exposed deep structural inequalities, with profound human rights implications. What lessons can the international community take forward to tackle the injustices in our societies?

What started as a health crisis has quickly turned into an economic and human rights crisis, with hundreds of thousands of lives lost, over one billion children out of school, and jobs that have disappeared overnight. The people suffering the most from the COVID-19 pandemic are those already marginalised due to race, gender and economic circumstances.

Apart from the immediate tragedy, the pandemic will have long-lasting economic and social effects. The International Monetary Fund (IMF) is warning of a worse impact than the 2008–09 global financial crisis. The broader consequences of coronavirus are already visible, with a staggering number of people pushed deeper into poverty, facing acute food insecurity and losing their homes due to forced evictions.

Before the pandemic, more than 700 million people, or 10 per cent of the world’s population, lived in extreme poverty on less than $1.90 a day, with resources far too low to enjoy their right to an adequate standard of living. Projections by the UNU World Institute for Development Economics Research estimate that 80 million more people could experience extreme poverty in the best scenario of how COVID-19 plays out. In the worst, as many as 420 million people could slip into extreme poverty. The United Nations has warned of a 9.1 per cent increase in poverty among women and a widening of the existing poverty gap between women and men.

At the same time, Oxfam has found that between March and July, eight new billionaires emerged in Latin America alone, and the overall wealth of billionaires there grew by 17 per cent. That’s equivalent to a third of all stimulus packages in the region, or nine times the urgent loans provided by the IMF.

The pandemic’s economic fallout has resulted in income loss primarily affecting people living in or vulnerable to poverty, working in jobs that are more exposed to layoffs and pay cuts, and, in general, working in precarious employment. Workers in the informal economy were hit especially hard since most of those jobs are low paid and cannot be performed remotely.

The pandemic’s unequal health impacts were perhaps most visible in urban areas. New York City reported that COVID-19-related deaths were three times as high in the most deprived areas as in the least deprived. A survey by the Mumbai municipality and research institutes found that over half of Mumbai’s seven million slum-dwellers already had COVID-19. And in Buenos Aires’ largest slum, Villa 31, where overcrowding is high and many households lack water inside their homes, infections have soared despite drastic lockdown measures.

The opposing realities of rich and poor speak to the rise in economic inequality in most countries over the last decades. They also suggest a reversal of any prospect of achieving the UN’s Sustainable Development Goals (SDGs) by 2030. Major setbacks are anticipated on the SDGs most directly related to inequality, including SDG 1 (end poverty), SDG 4 (quality education), SDG 5 (gender equality) and SDG 10 (reduce inequalities both within and between countries). But even before the pandemic, the SDG process was ill-equipped to reduce inequalities. The targets, indicators and systems for reaching SDG 10 were weak from the start, framing the inequality agenda as one of ‘shared prosperity’ focused on inclusive growth rather than actual reduction of inequalities.

Deepening disparities
Treating the reduction of inequality as just one in a long list of goals is problematic because extreme inequality is a barrier to achieving the 2030 Agenda as a whole. The rise in inequality had detrimental human rights effects, making it harder to reduce poverty and promoting disparities in access to health, education, housing and other services essential to economic and social rights, including along racial and gender lines. COVID-19 is deepening these disparities, especially for women and girls, in every sphere, including disproportionately driving them out of education, employment and housing.

The policy measures introduced to prevent some of the pandemic’s worst effects have also benefited people differently, depending on socio-economic class, gender, age, ethnicity or race and territory, and other factors such as disability or migratory status. At Human Rights Watch, we have been following the disproportionate financial impact of COVID-19 and economic relief packages in about a dozen countries. We found that governments had often taken essential steps, but have not been sufficiently sensitive to inequality or adequately focused on protecting people’s rights and preventing them from falling into poverty.

The pandemic offers a chance to change the status quo, though, and to move towards an economy that uplifts, rather than imperils, human rights. To seize this chance, countries should do at least three things.

1. Avoid austerity measures that violate rights
The spread of COVID-19 has laid bare the catastrophic consequences of austerity-driven fiscal policy that affects basic rights, which has been pursued aggressively since the global financial crisis. The austerity measures led to dilapidated public services, as governments cut spending and hollowed out programmes crucial to guaranteeing human rights. Public health systems in particular have been left strapped for resources necessary to tackle the pandemic. As countries enter the pandemic recovery phase and face large fiscal deficits, they should guarantee basic economic rights for all, consider progressive taxation, and strengthen public institutions rather than pursuing austerity measures.

Countries need to establish social protection floors, providing income support and other measures to ensure an adequate standard of living. Labour markets should be regulated to protect against exploitative practices. Both informal and formal workers need support to get decent jobs that pay a living wage and allow them to organise and balance their work–family responsibilities. This is particularly important when other basic services like education are closed, to ensure that women do not suffer the brunt of lost jobs.

3. Institutionalise action and oversight for reducing inequality
In 2015, 193 government leaders committed to reduce inequality as part of the 2030 Agenda. Progressive taxation and social programmes with a robust component to redistribute wealth are part of this commitment (see target 10.4: adopt policies, especially fiscal, wage and social protection policies, and progressively achieve greater equality). However, most countries seem to have stopped short of taking action. Tackling inequality during the recovery and beyond will require institutions and forums designed for accountability that monitor progress and compel change.

The pandemic’s course provides a painful reminder of the vast inequalities entrenched in our societies and economic systems. Continued poverty and extreme inequality are incompatible with the human right to an adequate standard of living. The failure to take the necessary steps to eradicate poverty and reduce inequality are policy choices that must be reversed to right the wrongs that have persisted for too long.

Governments should design their recovery efforts with a human rights lens that recognises that economic inequality and rights are intrinsically linked. This is essential if we are to build back better and hold governments and international institutions accountable for the kind of recovery they pursue.