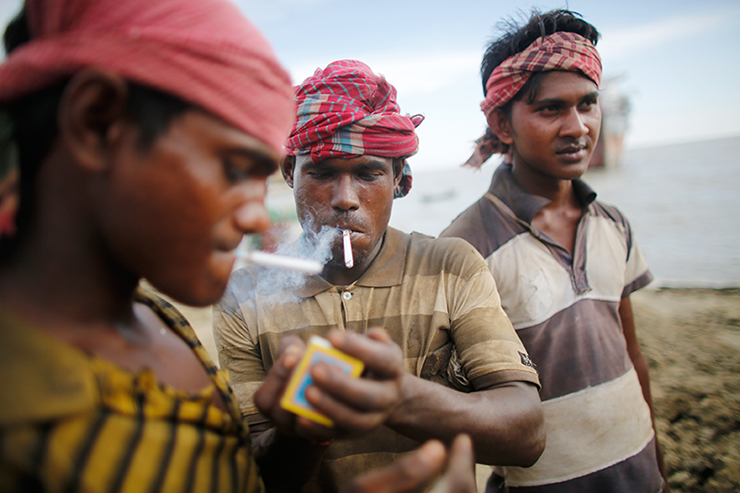 Ship-breakers in Chittagong, Bangladesh. A recent report by the Tax Justice Network uses the case of British American Tobacco to highlight ways the international tax system allows inequitable distribution of revenue. According to TJN, methods used by BAT will deprive six developing countries, including Bangladesh, of an estimated £540 million between now and 2030. © Andrew Biraj/Reuters

We can’t meet the Sustainable Development Goals (SDGs) without taxation. To bridge the SDG financing gap, developing countries will need to tax more and better. The donor community has already stepped up its efforts to support them, committing to double its collective provision of technical assistance on taxation between 2015 and 2020.

This new attention on taxation is a positive development, but it does carry with it some risks. Tax is primarily integrated into the SDGs through target 17.1, to “strengthen domestic resource mobilization, including through international support to developing countries, to improve domestic capacity for tax and other revenue collection”.

Measuring this using the ratios of tax revenue to national income and to total government revenue, as has been decided within the SDGs framework, is dangerous. It focuses on the quantity of tax raised and not how it is raised. Yet how tax is raised is where many of the risks and benefits are most significant: from exacerbating inequality to encouraging or discouraging investment. Tax can also help to reduce inequalities within and between societies (SDG 10), support stronger and more accountable political institutions (SDG 16) and – as in the case of environmental taxes – steer economic behaviour in a more sustainable direction (SDGs 12 to 15).

Structural constraints on developing countries’ abilities to raise revenue, including their positions in the global economy and the interactions between their tax systems and those of other countries, are also not captured by national-level aggregate indicators.

The last ten years have seen a huge growth in awareness of two problems related to those interactions: tax evasion by wealthy individuals who hide their income in tax havens, and tax avoidance by multinational companies that move their taxable profits to low-tax jurisdictions. Estimating the amounts lost is difficult, but most attempts to do so highlight that developing countries are more vulnerable. Fixing this problem is an essential part of any package to increase tax revenues in developing countries, and it requires cooperation among states.

The rules of international tax cooperation have been designed by and for developed countries over the past century, and there are good reasons to question their suitability for developing countries. Tools designed to help developed states prevent tax avoidance and evasion can make life harder for developing countries. They are not always targeted at the biggest problems facing them, not always appropriate to their more constrained administrative capacity, and they contain within them a bias in favour of developed countries’ interests. According to a press release by a group of finance ministers from francophone developing countries, “the global tax system is stacked in favour of paying taxes in the headquarter countries of transnational companies, rather than in the countries where raw materials are produced. International tax and investment treaties need to be revised.”

These concerns are particularly important at a time when donor countries – most of them members of the Organisation for Economic Co-operation and Development (OECD) – are investing in much-needed technical assistance for developing countries. There is a risk that such assistance may encourage the adoption of tools that are not in developing countries’ best interests.

Certainly, the OECD’s position as the dominant institution of international tax cooperation seems inconsistent with efforts to design institutions that meet developing countries’ needs. This has been borne out repeatedly. An example can be seen in new rules that require companies to disclose a country-by-country breakdown of their financial information to tax authorities, which can be used to detect potential instances of abusive tax planning for further investigation. Multinationals are only required to disclose this information to their home countries. However, the developing countries in which they invest are forced to go through a series of steps to obtain them, making it exceedingly difficult to access information that the OECD itself recognises to be useful.

Contentious subject
Because their interests do not always align, taxation has been a contentious subject in the relationship between developed and developing countries during the SDG process. At the Third United Nations Financing for Development summit in Addis Ababa in 2015, geared around filling the SDG financing gap, debate over the institutional arrangements for international cooperation in tax matters proved so divisive that it jeopardised the outcome of the summit.

Developing countries acting through the Group of 77 wanted a stronger role for the United Nations in tax cooperation. Developed countries did not support any action that would undermine the dominant position of the OECD, a group of 36 wealthy democracies. As another example, four years into the SDG period, there is still no agreement on how to incorporate tax matters into the measurement of SDG target 16.4 on “illicit financial flows”. Many developing countries, alongside campaigners, consider tax avoidance by multinational companies to be a major contributor to such flows. But this view is not shared by the home countries of those multinationals.

There are three reasons to believe that this situation might change in the future.

Second, the OECD has begun to open up, creating new bodies in which developing countries can participate on an equal footing.

Third, there are signs that developing countries are beginning to work together to shape the decisions made by these institutions. The Group of 24 developing countries has been actively promoting its own vision in current discussions at the OECD over the taxation of digitalised business models. This development is not before time: to meet the SDGs, we need international tax rules that better reflect developing countries’ needs.