Ensuring food for all

Conflict all too often exposes the fragility of food production and infrastructure, with devastating consequences for populations. WFP is working to strengthen food systems against such shocks 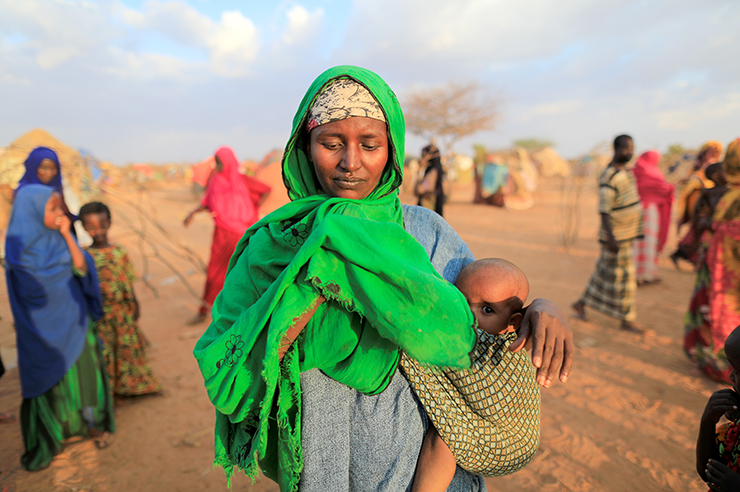 A makeshift settlement for people internally displaced by drought in Dollow, Somalia. Like most regions suffering from hunger, the country is riven by conflict. © Zohra Bensemra/Reuters

Ensuring food for all

Conflict all too often exposes the fragility of food production and infrastructure, with devastating consequences for populations. WFP is working to strengthen food systems against such shocks

I noticed the list first. The woman in the refugee camp in the Democratic Republic of the Congo (DRC) stood in front of me, her steady hands holding two pieces of paper stapled together. She had a list written down, and she wanted to speak with me. Men gathered around her, standing in support. She took the lead. And then, in French, she began to read from her list.

Nothing on it was about food, though food insecurity in the area was, and is still, high. Instead, her list was filled with requests for help with bringing peace – pleas to end the fighting so she and her fellow refugees could get back to their villages and small farms.

I wish this anecdote were an uncommon occurrence. But it’s not. I’ve heard it in Yemen from those trapped by the conflict that has raged there for more than two years. I’ve heard it from elsewhere in the DRC and in the Central African Republic. And I’ve heard it from Rohingya Muslims who fled from their homes in Myanmar to safety in Bangladesh.

These pleas illustrate the heart-breaking data on why hunger is on the rise around the world. Despite booming stock markets and advances in technology and health, the number of hungry people went from 777 million in 2015 to 815 million in 2016. Much of the increase is driven by conflict – 60 per cent of food-insecure people and, shockingly, 75 per cent of stunted children live in countries with conflicts.

Conflict can result from, and worsen, political and economic instability. It also leads to broken, disrupted and flawed food systems that fuel hunger, limit people’s livelihoods and make daily life incredibly difficult for everyone in the region. In many cases, they force people to migrate.

When food systems break down
WFP delivers food assistance to some 80 million people in 80 countries worldwide. Our work spans all sorts of food systems, and we see what happens when they break down. In war-torn countries, where agriculture and trade is disrupted and the economy collapses, the cost of a simple, nutritious plate of food can be more than a day’s wages. In South Sudan, for example, it can be as high as 155 per cent. A New Yorker might spend just 0.6 per cent of his or her daily income on that lunch. Imagine if a New Yorker had to pay $321 for a modest lunch – say a plate of bean stew – cooked at home!

The cost of conflict
Humanitarian organisations pay the price for conflict too. About 80 per cent of WFP’s operational spending occurs in conflict zones. Right now 19 of the 80 countries in which we work are experiencing protracted conflict. When we’re working in a conflict zone like Syria, it can cost 50 cents a day to feed someone, 20 cents a day higher than in more peaceful areas.

Overall, in 2016 half of the entire $27 billion global humanitarian budget went to help people in just five countries: Syria, Yemen, Iraq, South Sudan and Ethiopia. Of these, only Ethiopia enjoys a stable peace.

Some 42 other countries divided up the other half of the spending – budgets that in some cases covered as little as five per cent of the humanitarian needs identified. What does this tell us? That peaceful countries are being penalised because nations torn apart by conflict are sucking up the majority of precious humanitarian resources.

Fostering resilience in Kyrgyzstan
As we continue to look for peace, we have also got to look at long-term solutions that improve stability, reduce conflict and increase the resilience of food systems. In Kyrgyzstan, following a rise in ethnic conflict in 2010, WFP designed a food-for-work activity bringing together multi-ethnic residents. This activity increased small-farm production, generated employment opportunities and addressed food shortages, thereby contributing to the alleviation of the root causes of conflict. The process of working together made a crucial social impact by diffusing ethnic tension and creating community goodwill.

WFP also helps vulnerable smallholders and their communities with Food Assistance for Assets, which not only delivers food but also support the building of roads, irrigation systems or other assets. I’ve been to dozens of WFP operations in the field, and I’ve yet to meet a beneficiary who wasn’t eager to take part in a project.

Once a smallholder farmer’s livelihood is stronger, he or she can benefit from market access programmes like Purchase for Progress (P4P). R4 Rural Resilience, a joint project with Oxfam, helps farmers pay for weather-based crop insurance with labour or cash.

For children, we need to link food aid with education. School-age children who receive rations should also be in a school meals programme. Research by the United States Department of Agriculture shows, for example, that school enrolment in Laos and Nepal went up because of school meals.

And I believe that a school meal might provide something more than just sustenance and an incentive to stay in school. Two school mates, sitting on a bench, eating lunch together every day might create bonds that are harder to break later – even if they come from different tribes, or hold different faiths, or have different colour skin. And that means that something as small as one meal just might be one step towards something on that Congolese woman’s list: peace.