Young people will be critical to the success of the SDGs. But is the international community doing enough to enable them to genuinely influence post-2015 development? 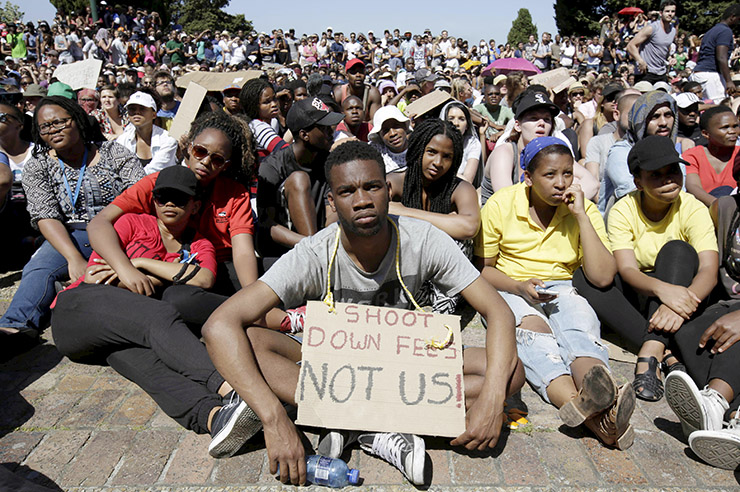 Students at the University of Cape Town, South Africa protest at planned increases to tuition fees. Achieving the SDGs will require young people to be engaged in the fulfilment just as they were involved in their formulation.
© Mark Wessells/Reuters

Young people will be critical to the success of the SDGs. But is the international community doing enough to enable them to genuinely influence post-2015 development?

The inception and launch of the Sustainable Development Goals (SDGs) have coincided with the era of ‘peak youth’. We now have the largest global youth population in history, with 1.8 billion people between 10 and 24 years old, but this is set to decline later on this century.

The peak youth generation present the crucial yet untapped potential we have for achieving the SDGs by 2030 – a generation that is more active, more connected and more able to lead change than ever before.

The youth population is growing where progress is most needed: nine out of ten of these young people live in developing countries. Of the six remaining countries where the average age of the population is still getting younger, five of them are in Africa. The African Union has recognised this opportunity, declaring the theme for 2017 as ‘Harnessing the Demographic Dividend through Investments in Youth’.

The peak youth generation will be the most affected by extreme poverty, rising inequality and catastrophic climate change. Today, young people make up 41 per cent of the world’s unemployed and are the only age group in which AIDS-related deaths are still increasing.

However, young people are not simply a dividend to cash in on. They are transitioning: neither dependent children nor fully independent adults. Young people are a vital group facing huge personal challenges – challenges on which society collectively succeeds or fails. The transition from childhood to adulthood is a transition full of potential; one that generates a global collective of young advocates and agents of change.

At Restless Development we recognise young women’s and men’s potential. Our vision for 2030 is that young people lead and champion the success of the SDGs, demanding and delivering a just and sustainable world.

Young people and the SDGs
Unlike the Millennium Development Goals, young people played a major part in demanding and shaping an ambitious agenda for the SDGs.

Young people led global initiatives, including ‘deep-dive’ brainstorming in developing countries and global consultations, such as the MYWorld survey and offline consultations run by young people and facilitated by youth-focused NGOs. Young people presented directly to the High-Level Panel on the Post-2015 Development Agenda, and took part in negotiations through the UN Major  Group for Children and Youth.

This global-level and UN HQ-focused action was met and supported by thematic and national-level campaigning, petitioning and lobbying. Groups like the Youth Governance and Accountability Task Team were established in key negotiating member states to ensure young people’s priorities around voice and participation were pushed at the national level.

Meanwhile, the UK’s Department for International Development included young representatives in its delegation to the UN General Assembly in 2015 and 2016. Young people’s perspectives were continually championed by the UN Secretary-General and his Envoy on Youth.

Outside the ivory towers of the UN, young people took to the streets and the media, raising public attention and demanding ambitious global commitments on International Youth Day through the action/2015 campaign.

Having a young person in the room is not youth engagement
Although youth-led development has seen huge gains in recent years, it often remains too tokenistic, too little and too late.1

Young people still lack access to decision-making structures. While under-35s make up 70 per cent of the global population, they make up only six per cent of parliamentarians. In Nigeria you can’t run for the office of president until you are 40 years old. Campaigns such as #NotTooYoungToRun may be making headway, but it is perhaps no surprise that  the average age of parliamentarians in Nigeria is 53.

Meaningful youth engagement – beyond including a token young person in the room or handing them a scripted speech – remains a global challenge. The lack of trust between youth and government institutions, and the perception that young people lack the experience and capacity to meaningfully engage with decision-making processes, have held back progress time and again.
Recognising that meaningful youth engagement is two-way, and essential to improving quality development practice, Restless Development has developed a youth engagement ‘bullseye’ to support practitioners.

After 30 years of learning how best to enable youth-led change, Restless Development believes that if the SDGs are truly to leave no one behind, young people must lead transformative change. Young people are embedded in all communities and represent some of the world’s most marginalised. In order to achieve transformative change, we recognise that young people need to do three things: deliver, inform and influence.

First, young people must be empowered, enabled and supported to deliver the SDGs – whether through long-term HIV prevention work in schools, or responding to global crises. When Ebola hit Sierra Leone, some of the strongest mobilisation and prevention initiatives were delivered by young people. Restless Development mobilised and trained 2,000 young people to lead and deliver Ebola prevention work in some 10,000 communities, reaching almost 1.9 million people across the country.

Second, young people should inform every aspect of development. When it comes to collecting data, evidence and progress on the SDGs, young people will be the key to success. They are effective and impactful ‘infomediaries’ who have already created new and innovative monitoring approaches for the goals. They are collecting real-time data, filling the data gaps and translating and communicating this information to global citizens, leading to greater accountability.

Young people have been mapping and tracking progress on a host of issues, such as teacher attendance in schools in Uganda and collecting data on child marriage, sanitation and health through UNICEF’s U-Report social messaging tool.

And third, the potential of young people to influence change at local, national and global levels must be recognised and supported. Examples include influencing cultural norms, policies and systems that affect people’s lives – such as working to end child marriage in India or school-age pregnancy in South Africa, or campaigning for missing medicines.

One example of youth influence is 15-year-old Eva. Eva lives in a village in rural Tanzania. Through the Mabinti (‘Girls, Let’s be Leaders’) programme, she was informed about the SDGs. She wrote to, and was heard by, former US President Obama during the launch of the SDGs at the UN, and has gone on to start a campaign asking for clean water to be available in her village, Mlowa. Since then, 150,000 people signed her petition globally and she’s made progress through meetings with her local and national leaders.

Giving global weight and attention to local campaigns like #StandWithEva is just one way in which young people can support each other and amplify change.

Through a global youth collective, we are enabling young people to connect and achieve the scale necessary for youth-led development to have maximum impact. By delivering, informing and influencing the SDGs in this way, Generation 2030 can make sure these promises become a reality.