End of the line for malnutrition?

The scourge of malnutrition – in all its forms – affects all countries to some degree. With the SDGs we have the chance to eradicate this complex, human-made problem once and for all 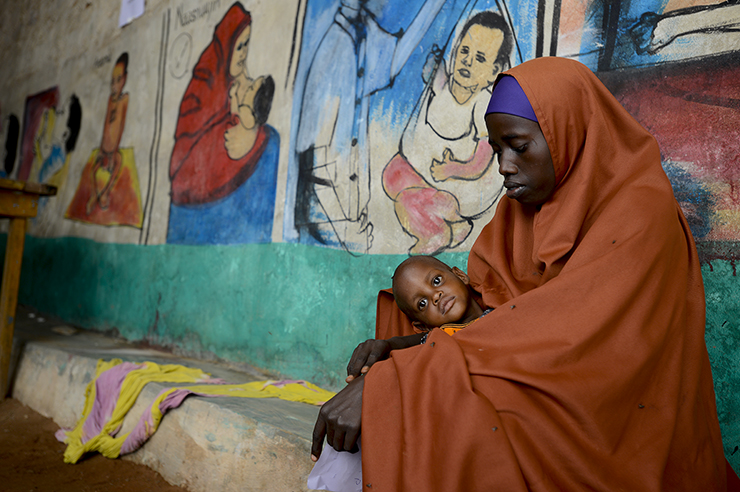 An outpatient therapeutic feeding centre in Baidoa, Somalia where children receive ready-to-use therapeutic food and mothers are educated about nutrition and hygiene. One in seven Somali children is malnourished
© UNICEF Somalia/Sebastian Rich

End of the line for malnutrition?

The scourge of malnutrition – in all its forms – affects all countries to some degree. With the SDGs we have the chance to eradicate this complex, human-made problem once and for all

The international community is confronted with a problem whose cost to the world economy ranks alongside that of armed conflict, war and terrorism. It is a problem for richer, poorer and middle-income nations alike; a problem that affects about a third of the global population, sapping some five per cent of the world’s economic welfare. This problem is malnutrition. It is not a disease but if it were, a worldwide epidemic warning would already have been declared.

Of all the UN’s new Sustainable Development Goals (SDGs), which will direct global action for the next 15 years, improving nutrition is perhaps the most universal. It is also one of the more complex, as malnutrition comes in many guises. Much effort has been put over the last decades into the eradication of chronic hunger – one of the main objectives of the UN Food and Agriculture Organization (FAO). Excess weight and obesity, likewise, have garnered growing public attention in recent years.

But there is another form of malnutrition that is not nearly as visible as chronic hunger and yet far more widespread: micronutrient deficiency, or so-called ‘hidden hunger’ – a form of malnutrition that occurs when food is lacking in essential vitamins and minerals. Today around 800 million people suffer from chronic hunger – not consuming enough calories to lead a normal, active life. But some 1.6 billion people – double the number of those undernourished – are anaemic, to give but one of many examples of the effects of hidden hunger.

The effects of hidden hunger are similarly devastating and long lasting as those of chronic hunger. They often begin before birth, contribute to poor growth during childhood and can render people unable to achieve their full intellectual and developmental potential as adults. Hidden hunger often lies at the root of poverty, limiting health and productivity and keeping generations trapped in vicious cycles of deprivation.

The impact of malnutrition does not end with undernourishment and hidden hunger. In many families, the various burdens of malnutrition – undernourishment, micronutrient deficiency and obesity – coexist, hinting at just how complex an issue malnutrition really is. Today, more than two billion people in the world are overweight or obese, according to the World Health Organization (WHO) – a staggering 40 per cent rise in just a few years. That’s three out of every ten people on the planet.

Many of these people reside in middle-income countries and poorer nations where diets are undergoing change. Particularly worrying is the rise in overweight and obese school-age children. Unless current trends are reversed, half the world’s adult population will be overweight or obese in about 15 years. This is placing an increasingly heavy burden on national healthcare budgets, as these people run a greater risk of diabetes, heart problems and other diet-related non-communicable diseases.

Nutrition in the SDGs
As it happens, malnutrition, like poverty, is entirely human-made. Improving nutrition is not just the responsibility of the individual, but a public issue that must be addressed by governments.

The adoption of the 2030 Agenda for Sustainable Development comes at an opportune moment, as it provides a comprehensive and potentially powerful set of internationally agreed goals and targets to tackle the colossal challenges of our day. The SDGs, which succeeded the Millennium Development Goals (MDGs) in January 2016, recognise that real-world development is seldom confronted by a single problem for which there is a single answer, but deals with interlinked problems needing creative, context-specific and people-centric solutions.

The approach to malnutrition in the 2030 Agenda illustrates the point perfectly. Malnutrition cannot be ended without addressing the variety of social, economic, environmental and cultural factors that contribute to it. SDG target 2.2 directly speaks to the multiple dimensions of malnutrition. However, measures to end it relate to at least six goals and 18 different targets. These include poverty eradication, women’s empowerment, improved sanitation, maternal health, access to water and reductions of food loss and waste – to name but a few.

But it is food systems that lie at the heart of this new comprehensive approach to ending hunger, tackling malnutrition and promoting sustainable agriculture and use of natural resources. There is increasing recognition that current food systems are failing and that improvements in nutrition and dietary diversity can only be realised by transforming the entire food process – from agricultural inputs and production to processing, marketing, retailing, consumption and waste. SDG target 2.4 calls for sustainable food production systems and resilient agricultural practices.

From production to consumption
The need to increase food production by 60 per cent to feed a global population of more than nine billion by 2050 has been well documented. Yet, today’s major food concern is not availability, but lack of access: people’s ability to purchase good food and enjoy nutritious, diverse and balanced diets. Despite abundant food supplies, one in nine still go hungry every day. Meanwhile, highly processed commercial food products are easily available and accessible, which contributes to them often replacing healthy local foods with diets that are too high in energy, fats, sugars and salt.

To build healthy food systems for healthy people, strong political commitment is necessary to ensure what is grown, marketed and consumed domestically conforms to high nutritional standards. In other words, agricultural policies and practices must support more healthy, balanced and diverse diets. National investments in agriculture, food systems and social protection are needed to scale up nutrition-sensitive interventions. For the agriculture sector, this represents both a challenge and an economic opportunity.

Undernourishment, lack of economic development, poverty and malnutrition can all be addressed at the local level, as experiences in developing countries with locally sourced school-feeding programmes have shown. Nutrition education, market development and consumer protection, likewise, are empowering consumers to make healthy food choices and are fundamental to changing behaviour. Finally, building alliances between diverse stakeholders – and platforms to support them – will help make agriculture and food systems more responsive to the nutritional needs of communities.

Along the way, we must never lose sight of the impacts of food production on our environment. Food production has often put great stress on natural resources – exhausting fresh water supplies, encroaching on forests, degrading soils, depleting wild fish stocks and reducing biodiversity.

The emphasis on sustainable agricultural practices and efficient use of natural resources with fewer adverse impacts – covered in SDGs 2, 14 and 15 – is vital in the transformation of our food systems. It will help to ensure that future generations can feed themselves without compromising the planet’s fertility.

It has been a bruising battle, but the war against malnutrition appears to have reached a decisive turning point. The Second International Conference on Nutrition in 2014, organised by the FAO and WHO, established the basis for sustained international cooperation and better policy coordination to overcome malnutrition through the Rome Declaration on Nutrition and its accompanying Framework for Action.1 The 2030 Agenda for Sustainable Development goes beyond the silos that defined the MDGs to address the root causes of malnutrition in all its forms.

The time has come to put nutrition centre stage. Malnutrition is a blight on humanity – but one we are able to end within our lifetime and become the first Zero Hunger generation.2