Development at what cost?

What if the pledge to ‘leave no one behind’ were interpreted as a radical re-vindication – not just of equality, but also of individual human rights? 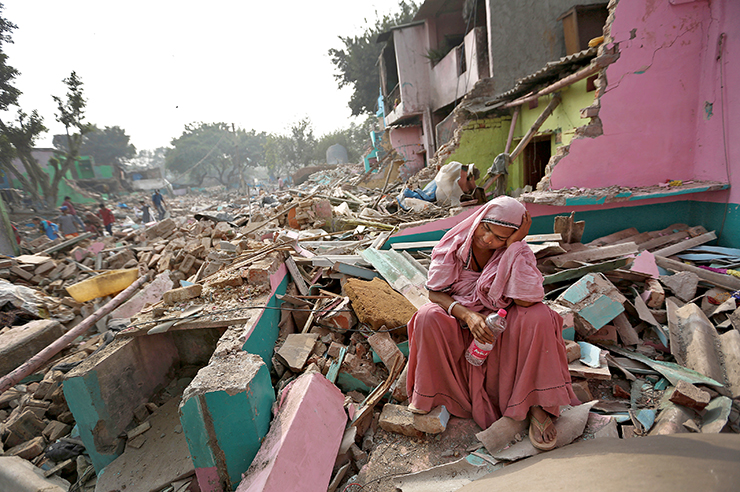 Delhi, India. Former residents in the ruins of their homes, demolished by local authorities in a bid to relocate them. Development under the SDGs must  mean that no one is forced to suffer in its name. © Cathal McNaughton/Reuters

Development at what cost?

What if the pledge to ‘leave no one behind’ were interpreted as a radical re-vindication – not just of equality, but also of individual human rights?

In the run up to 2015, while many campaigned on which critical issues would become ‘goals’ and ‘targets’, and as a particularly tense debate continued about the overall number of goals, a parallel piece of advocacy was underway. A group of organisations and governments were pushing for the preamble to the goals to include a particular idea: this time, let no one be left behind.

Analyses of progress during the era of the Millennium Development Goals (MDGs) had unearthed an important reality, which coincided with a more general tendency in economics and politics. While much progress had been made on a range of indicators, some facets of inequality were also increasing. To reduce inequality, poor people need to get richer faster than rich people get even richer. The same principle applies to health, nutrition, education, housing and other measures of development.

But in many countries, while progress could be noted on average, it was not ‘pro-poor’ progress, because the poor were not catching up with their wealthier compatriots. And even where progress was pro-poor, it was usually not pro-poorest. That is to say, there are many levels of poverty and deprivation, and different policies are required to reach the very poorest compared with the not quite so poor.

Going a step further, it became increasingly clear that along with traditional inequality measures between households and individuals (known as ‘vertical’ inequality) there is also persistent inequality between groups (known as ‘horizontal’ inequality). The most marginalised groups fall further behind other groups that have traditionally had more opportunities. Put another way, it is still very easy to predict who will be the poorest people in any given country. Just look at someone’s ethnicity, gender, disability and where they live, and you will be able to make a depressingly accurate guess about their economic and social reality.

That’s why a concerted effort was made in the run-up to the launch of the new Global Goals to ensure that this time progress must be equitable as well as rapid.

In a policy paper published in 2014, Save the Children argued that: “The blind spot of the Millennium Development Goals to inequalities must be corrected… Inequalities are not an inevitable outcome of development progress… The process to define a post-2015 sustainable development framework offers an opportunity to change the course of human history. The new framework must include concrete mechanisms to ensure no one is left behind under any goal.”

Save the Children, joined by many other organisations, called for “an explicit commitment that, in 2030, no target will be considered met unless met for all groups”. They suggested “stepping-stone equity targets” to ensure disadvantaged groups really are catching up.

It was a successful campaign. Article 4 of Agenda 2030 states: “Recognizing that the dignity of the human person is fundamental, we wish to see the goals and targets met for all nations and peoples and for all segments of society. And we will endeavour to reach the furthest behind first.”

Not only that, but this pledge that “no one will be left behind” has been perhaps the most successful and memorable aspect of Agenda 2030. Clauses in UN documents can be easily forgotten (deliberately or otherwise). But while few people will be able to reel off the 17 Sustainable Development Goals (SDGs) – or even the first five – most people in the world of international development know that ‘leave no one behind’ is the key principle on which the ambitious agenda hangs – now with its own acronym (LNB).

Having said all that, no progressive statement is ever made without the forces of inertia and privilege combining to interpret it as conservatively as possible. In this article I will first insist on the ground-breaking nature of this pledge as regards addressing inequality rather than just poverty. And, second, I will suggest a yet more radical reading of it: that it speaks not just to collective rights (i.e. for marginalised groups to be accorded special support) but to individual rights as well (i.e. it implies an approach to development that sacrifices no one on the altar of growth and progress).

Inequality, not just poverty
Some of us were pleasantly amazed when Agenda 2030 stated so clearly its determination to address inequalities (plural) “within and among countries”, even giving the issue its own goal (SDG 10). But the inequality battle is still very much on, with many countries keen to shelve the issue, to remove from the LNB principle its intentions regarding equity, and to imply that it is just another inspiring promise that, finally, everyone should be lifted out of extreme poverty.

While tackling extreme poverty remains the first and most urgent goal of national policy-making and international cooperation, the SDGs promise much more than that. They seek to transform our world, such that all people can expect high standards of living, not just the few who happen to be born in rich countries or to wealthy families. If the LNB pledge had nothing to say about rising inequality, it was hardly worth saying at all.

Tackling poverty is not the same as tackling inequality. For the former, policymakers can be relatively relaxed about rising inequality as long as the poorest are scraping over an agreed poverty line. But for the latter, policies may need to address the top of the widening gap between rich and poor, not just the bottom.

Imagine two cars racing, one substantially ahead of the other. Now imagine the slower car speeding up – that’s poverty reduction. But what if the car in front speeds up even faster – that’s widening inequality. And the space between the cars continues to grow – that’s being left behind. The world could have signed up to ‘no one left in poverty’ – the MDG vision. But it said ‘no one left behind’. Campaigners should be careful not to allow that bold sentiment to be diluted. The gap matters. We need policies and action to counter inequality, not just poverty.

Human rights, dignity and LNB
That would be radical enough. But what if this omnipresent phrase were to mean something more radical still? Looking again at the first clause of the Article 4 quote above, it is not obvious what “the dignity of the human person” alludes to. Perhaps it is just one of those general mentions of human dignity with which UN drafters tend to sprinkle their output. But perhaps it is getting at a different meaning for LNB, beyond the general admonition to reduce both vertical and horizontal inequalities.

Development is essentially amoral. This may come as a surprise to some people who think the concept implies a moral cause. But I have spoken to people in poor communities who say development is a threat to their families and way of life.

Why? Because although development can mean jobs, poverty reduction, greater respect for human rights, better access to basic services, and greater land sovereignty, it doesn’t necessarily. Believe it or not, it will be possible to meet many of the SDGs while simultaneously committing grave human rights abuses.

Take a situation in which people are displaced from their land by violence (or the threat of violence). That land is then used to develop mega plantations to produce bananas or palm oil, or to mine for copper or coal, or to rear cattle. Private investment flows in, which some analysts think is vital for development. Exports lead to economic growth, which many commentators seem to think is synonymous with development.

Meanwhile, human rights are ignored, and resistance crushed. Individuals who stand up and denounce the situation are disappeared. This is not hypothetical. The Guardian described 2017 as “the deadliest year on record” for land defenders.

Or take a situation where there is general progress on development indicators in a country. Meanwhile, human rights activists (feminists, trade unionists, politicians, journalists) are systematically removed from the story using the variety of means many governments have proven adept at employing. The excuses given are that these activists are enemies of progress,  and that their insistence on the rule of law and individual freedoms puts such progress in jeopardy.

There are many countries in the world where the scenarios I have sketched are no caricature but a daily lived reality. While SDG 16 certainly begins to respond to some of these issues, what if the call to leave no one behind began to be applied to these people as well? Not groups or communities or clusters on a graph, but real, living people? Such people are being sacrificed on the altar of an unethical kind of development, which pits progress for many against erasure of a few.

Some talk of a trade-off between human rights and development. But, in reality, the development strategy pursued by a particular government is a matter of moral and political choice.

While the world has devised development targets to chart progress, it has not yet built a database to measure the costs. The idea of the costs of development sounds like an oxymoron but is the fundamental concept we need to place at the heart of development theory and practice in the 21st century. We need ethical, not just sustainable, development. And the LNB principle could be a platform upon which such data and evidence is built.