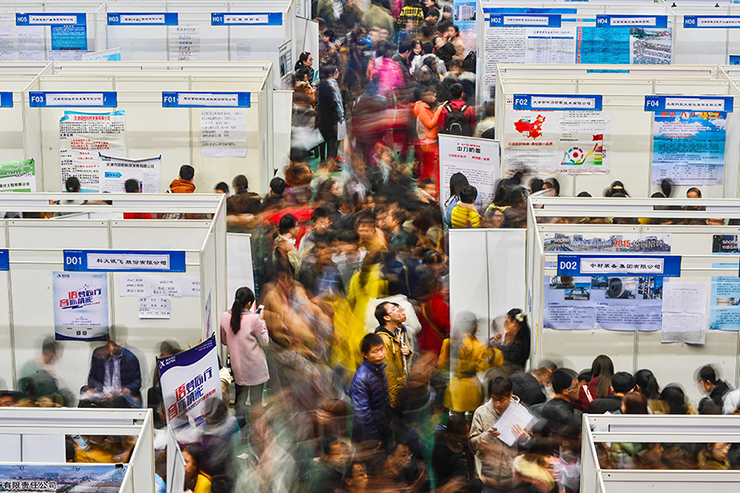 Graduates attend a job fair at Tianjin University Sports Arena, China. China and other East Asian countries are compelling examples for the development benefits of the ‘demographic dividend’. © VCG via Getty Images

Progress toward achievement of the Sustainable Development Goal (SDG) targets is closely linked to demographic trends. Although developing countries around the world are at various stages in their demographic transition, most of them are experiencing a time that is particularly conducive to economic development.

Known as the ‘demographic dividend’, it is a period during which the proportion of working-age people is increasing relative to the rest of the population. In these countries, the proportion of children is declining because of low fertility, and the proportion of elderly people is still small. This economically favourable period can contribute to the creation of the necessary savings, productive conditions, financial and social institutions, and social protection systems to accelerate progress towards the SDGs.

Taking advantage of the opportunities and responding to the new challenges presented by the demographic transition require forward-looking policies that take account of population dynamics. Implementing policies to promote economic growth and respond to the social protection needs of a changing population are also critical to addressing high levels of economic inequality. Hence, the success of the 2030 Agenda for Sustainable Development, which pledges that no one will be left behind, is strongly bound to anticipating and planning for the effects of the demographic transition that will unfold during the SDG period.

The evidence
If we are to deliver on the SDGs, it is crucial to promote evidence-based policies. Building reliable and comparable data linking population change and socio-economic development is a precondition for analytical work. National Transfer Accounts (NTAs) represent a new set of tools that reveal the age dimension of an economy, showing how populations at each age produce, consume, save and share resources.

In all countries, children and the elderly consume more than they produce. In a country with a large share of children, working-age adults are devoting so much of their production to the basic needs of their many children that too little is left to invest in their children’s education or to save and invest for their own future.

During the early stages of demographic transition, people have fewer children and are living longer. As a result, the working population makes up a relatively large proportion of the population, compared with a small elderly population and a shrinking population of dependent children. This change in population age structure ushers in a period of accelerated economic growth called the ‘first demographic dividend’.

With fewer children in the population, families and governments also have more resources to care for and educate each child, and invest in the economy and standards of living. The earlier investments on health, education and physical capital can help the nation maintain long-lasting economic growth, achieving the ‘second demographic dividend’.

The NTAs project provides ample evidence on the first and the second demographic dividends. Many countries have experienced this unique opportunity to realise higher standards of living and lower rates of poverty.

This process is beginning in Africa, where it will relieve the pressure created by very young populations. East Asian countries provide the most compelling evidence, as they have achieved many of the central elements of the SDGs, such as poverty reduction and expansion of education and health. In many countries of Southeast and South Asia, and Latin America, age structure will be favourable for several more decades.

In addition to the demographic dividend, the demographic transition has also created favourable conditions for another powerful dividend. Known as the ‘gender dividend’, it results from the increase in female labour-force participation, which implies overcoming discriminatory barriers against women that exist both inside and outside of the labour market. The National Time Transfer Accounts (NTTAs) provide a framework for assessing the magnitude of the gender dividend. They also allow us to measure changes in gender specialisation in economies over time, the hidden care economy, and progress toward gender equality (itself a specific SDG – Goal 5).

By providing a framework for understanding the impact of changing age structures and women’s roles on national economies, the NTAs and NTTAs allow us to fully integrate population dynamics into sustainable development planning. This has become more crucial with the adoption of the 2030 Agenda for Sustainable Development, as well as the regional development agendas (the Montevideo Consensus on Population and Development, Agenda 2063, and the Asian and Pacific Ministerial Declaration on Population and Development).

Key policy options
The changing dynamics of population have important implications for sound and sustainable public policy. As child dependency declines, families and governments alike can increase their investment in each child without increasing overall spending. Better child health and more education will lead to higher incomes, so that national economies can continue to grow and important social programmes can be sustained.

Jobs are critical at every stage of the age transition. Policies should draw a wide range of the population into the workforce, including young adults, women and the elderly who can still work. Policy options for the labour market could include: increasing the mandatory retirement age; varying pension benefits so that early retirement is neither encouraged nor discouraged; and improving flexibility for employers to hire part-time workers, which may be especially attractive to women and the elderly.

Governments should create an economic environment that encourages high rates of saving. In addition to providing retirement income for individuals, high saving supports investment that leads to higher wages and a more productive workforce. One priority is to ensure that financial institutions provide attractive and secure long-term investment opportunities in the context of low inflation, so that money saved today will retain its value tomorrow.

The beneficial period of the demographic dividend will be followed by a period of population ageing. This will pose new social and economic challenges that can impede progress towards the SDGs. Policymakers need to think ahead about how their growing elderly populations will be supported in the future without overburdening those of working age or sacrificing economic growth.

The goal should be to establish public programmes that provide some basic level of security but that can be sustained in the years ahead.