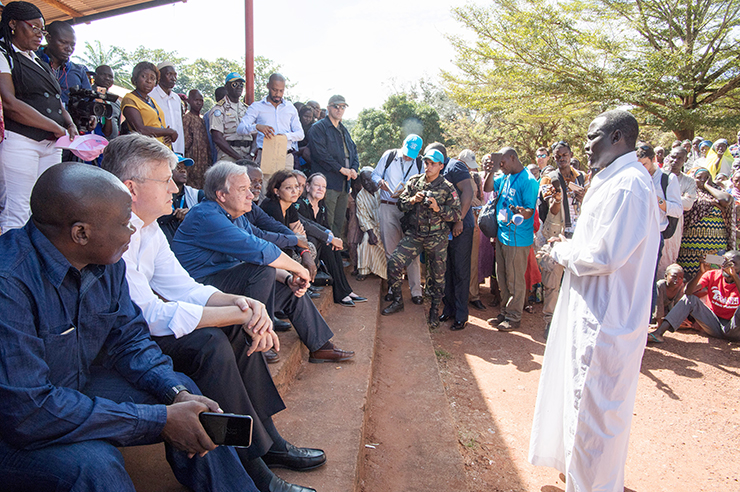 The approval in 2015 of the UN 2030 Agenda for Sustainable Development was welcomed as much with relief as triumph. The 17 Sustainable Development Goals (SDGs) were the culmination of a protracted process that had begun in 2012 at the Rio+20 summit and continued with a high-level panel chaired by three serving heads of government. The process then continued with an ‘open working group’ (OWG), which reinvented rather than reinforced the panel’s report and the comprehensive declarations of earlier summits.

Discussions encompassed a wide range of litigants – not only from governments but also from UN organisations, non-governmental organisations (NGOs) and the private sector. It is hardly surprising, then, to find within the SDGs various elements that seek to please lots of different people.

Instead of the eight Millennium Development Goals (MDGs), the panel had proposed 12, which the OWG expanded to 17, accompanied by 169 explanatory paragraphs, described as ‘targets’. A belated attempt by the UN Secretariat during the negotiations to consolidate the expanding goals into six groups of objectives amounted to whistling in the wind. As one sceptic noted in the New York Times: “Having 169 priorities is the same as having none”.

Nonetheless, given the sometimes toxic South-North politics of UN deliberations, there was considerable relief that an agreement, however vague, had resulted. While the SDGs were not “action-oriented, concise and easy to communicate, and limited in number” as Rio+20 had exhorted, they were universal. They engaged all Member States, not just those from the Global South. Unfortunately, several critical development concerns – including human rights abuses, ethnic discrimination, religious intolerance, chronic humanitarian crises, and forced migration – were almost absent from an agenda that promised to “leave no one behind”.

What we call the ‘first’ UN – that of Member States – now has a mammoth and complex agenda, albeit only a partial one. The proof of this pudding will be in its implementation, supported by the ‘second’ UN of professionals from across the system.

Here, the UN has at least five responsibilities that will challenge its analytical and political competence: refining and interpreting the agenda; helping countries to align the agenda with their own priorities; raising awareness; helping to marshal the resources and the partnerships to assist; and establishing effective monitoring mechanisms.

As soon as the champagne flutes had been stored after September 2015, the SDGs and the targets desperately needed rigorous quantification and measurable indicators. The UN Statistics Division – which should, in the interests of practicality, have been far more intimately involved at an earlier stage – eventually identified a ‘definitive set’ of 232 separate indicators.

This essential step began to give concrete meaning to the goals. But with so many indicators, no country can be expected to achieve more than a minor proportion, even of those that can be measured accurately. So the UN needs to rev up its assistance to national data-gathering capacities.

Second, the UN now should provide guidance to countries about how to incorporate the SDGs into development planning. The UN Development Programme (UNDP), with support from the UN Development Group (UNDG) representing the UN’s operational family, is leading the way. It has produced a guide to “facilitate mainstreaming of SDGs into national and local plans”.

The guide lists the planning cycles in every country and the main ministries responsible for each goal and indicator. Getting countries to embed the SDGs into their own development programmes will mean superimposing a 15-year agenda onto national plans of far shorter durations. This point of departure will require all UN organisations to work closely together in each country if ‘mainstreaming’ is to have any significance. A measure of the challenge is suggested by the fact that all UN organisations have identified several different goals as part of their own responsibilities.

Third, the activities of the UN must help sustain the focus on achieving the SDGs among governments and other actors. Compared with the MDGs, the UN has been more effective about raising awareness among non-state actors, mainly by including something for everyone on the agenda. Apart from many international and local NGOs, the for-profit sector’s concerns have been incorporated in this UN campaign more than in earlier ones. A concern for sustainability clearly has contemporary relevance for many enterprises, multinational and domestic.

Fourth, resource mobilisation has been linked to awareness and partnerships. The Financing for Development Conference in Addis Ababa in July 2015 was helpful in highlighting the importance of mobilising domestic resources in support of the SDGs. Private capital will be essential and can be encouraged through closer partnerships between the UN and the private sector.

The UN development system (UNDS) should follow through on the proposals for ‘blended finance’ (combining public with private and philanthropic sources) put forward by the Business and Sustainable Development Commission in its final report to Davos in January this year.

Finally, goal-setting has no meaning unless accompanied by rigorous and reliable monitoring. The 2015 meeting confirmed the proposal from the Rio+20 summit to establish a High-Level Political Forum (HLPF) under the Economic and Social Council. The HLPF has a “central role in overseeing follow-up and review at the global level”. By July 2018, it will have seen more than 110 national reviews, which all countries are expected to prepare.

But how objective will they be? Described as “voluntary”, in which non-governmental stakeholders are “encouraged” to participate, will governments’ feet be held to the fire for success or failure? The UN Secretariat will produce synthetic and thematic reports. But there should also be comprehensive tallies to determine precisely which countries are succeeding on which goals, and which are failing. The Universal Periodic Review conducted by the UN Human Rights Council provides a model. But this kind of mechanism – calling a spade at least a shovel – is not an intergovernmental favourite.

Essential reform
Is the current UN up to these five challenges? It is hard to be sanguine if we take into account the modest levels of technical competence and the absence of coordination of country-based teams. In the future, much will therefore depend on the proposed reforms put forward by Secretary-General António Guterres in December 2017.

Intended to align the system with the SDGs at the field level, his reforms seek to separate the heads of the UN country teams (resident coordinators) from the UNDP (which has attempted for years to be both coordinator and competitor), and to provide more resources and staff. The UN’s country presence is supposed to be rationalised and harmonised around teams with ‘enhanced skillsets’. At the global level, the UNDG is supposed to be a more effective overseer of field coordination. Meanwhile, donors are called upon to provide more core funding to UN organisations and to expand pooled resources to encourage more joint programming.

It must not be underestimated how challenging it will be to put into effect these changes, without which the UNDS will remain a feeble partner. The proposals echo those of Kofi Annan in 2006, which remain only partially implemented. Their success, therefore, depends on Member States’ commitment to the SDGs and their willingness to support Guterres in this task.

Reform of the UNDS is not just essential for it to be capable of playing its part in the SDGs. It is also needed for its vital role in those equally critical areas which fall outside the SDGs: promoting human rights, supporting governance and preventing conflict.