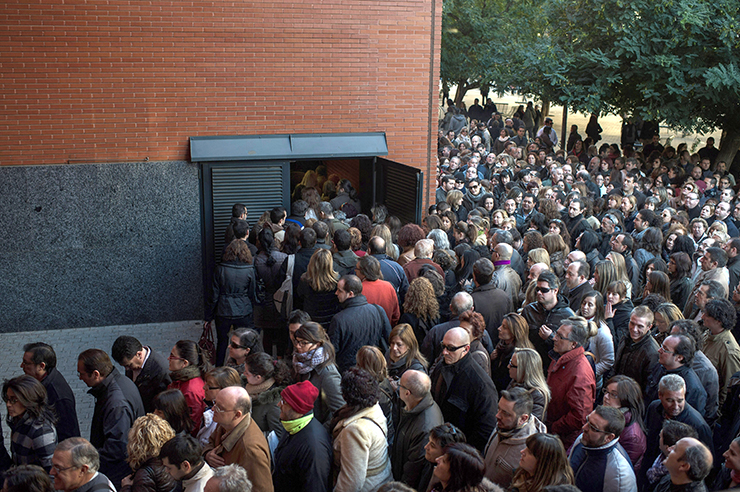 Job applicants queue at the University of Valencia, Spain to take an exam for health orderly jobs: 34,797 people applied for 200 positions. The sustainability of the global economy will depend on addressing rising unemployment and job insecurity. © David Ramos/Getty Images

Global economic growth picked up in 2017 and is expected to stabilise at a low level in the near future. At the same time, the latest ILO data show that ‘decent employment deficits’ remain high and multifaceted: globally, 192 million people are unemployed. Of these, over 70 million are young people, with youth unemployment now three times higher than adult unemployment.

In addition to those people without a job, many of those with one often work under insecure conditions. In 2017 about 1.4 billion people were in vulnerable forms of employment (such as own-account workers and contributing family workers), and this number is on the rise.

Informality is widespread, particularly in developing and emerging countries where it reaches more than 90 per cent and 67 per cent of total employment, respectively. Significantly, the pace of reduction of ‘working poverty’ – those who work but are trapped in extreme or moderate poverty – has slowed down, after decades of remarkable progress.

Deficits in decent employment opportunities, and the quantity and quality of jobs available to people who aspire to work, affects nearly all regions. Yet there are also significant variations across countries and among different segments of the population. Women, youth and the low skilled often find themselves in particularly challenging situations.

New technological developments – labelled as the fourth industrial revolution or ‘industry 4.0’ – have added another layer of uncertainty and anxiety to the global concern for jobs. In particular, people are worried about increasing automation and the use of robots displacing demand for human labour.

The fourth industrial revolution has become a way of describing a set of ongoing and impending transformations, which rapidly emerging technologies are bringing or will bring to systems surrounding us. These will affect many aspects of life – work included. The technologies range from artificial intelligence, robotics and virtual and augmented realities to developments in neuroscience, biology and new materials.

Previous industrial revolutions also witnessed widespread legitimate concerns about the destruction of jobs and distribution of wealth and wellbeing induced by new technologies. Then, as now, there was a sharp divide between optimists and pessimists. The first industrial revolution in the mid-18th century was sparked by the mechanisation of spinning and weaving in Britain’s textile industry.

The second industrial revolution, spanning the next 100 years, saw a wave of massive transformations and technological developments: the steam engine, electricity, internal combustion engines, machine tools and transport. The digitalisation of economies, sparked by the information and computation technology in the 1950s (and now referred to as the third industrial revolution), laid the foundation for all of today’s new, emerging technologies.

Throughout all these waves of technological invention – which resulted in immense overall gains of productivity and wellbeing – reality overtook all projected scenarios, sometimes in unpredictable ways. It is certainly true that there has been massive destruction of occupations. Yet rising demand for new jobs and skills has outpaced it on a scale and in areas that had not been – and could not have been – predicted by any of the above scenarios.

Will it be different this time? There are at least three issues that we need to consider:

Job destruction and creation
The pace of current technological developments in industry 4.0, often characterised as exponential, is distinct from the pace of their adoption. ILO research shows that in assessing the impact of automation technologies on jobs, it is important to distinguish between the availability of technology that could replace or displace a certain job and the probability that the technology will be adopted on a large scale, replacing all such jobs.

While attention is narrowly focused on the rapid pace of automation and robotics in the manufacturing sector (in advanced economies and some emerging countries), there are broader factors that need to be taken into account beyond a simple cost comparison. And the gaps between the probability that such technology could replace jobs and will replace jobs are larger in and among developing countries.

There are also wide sectoral variations. On the other hand, the job creation impact induced by new technologies is usually underestimated. The net overall impact on jobs but also on productivity gains can only be assessed in the mid to long term, and by looking more holistically at different levels of enterprise, industry and economies as a whole.

Equitable distribution of productivity gains
As for all important technological innovations that affect the availability and nature of jobs, the main issue is how the productivity gains will be distributed, and through which mechanisms and institutions.

In the last two decades, all regions with the exception of Latin America have experienced an increase in income inequality, along with a decline in the share of income that goes to labour relative to capital. And this pattern has persisted while labour productivity has increased.

In the present context of high levels of inequalities among and within countries, and already strained labour markets, there is legitimate fear of further marginalisation of disadvantaged groups, including the low skilled. The risk is that societies in both developed and developing countries will become more polarised.

Proactive policies for shaping the future
All previous industrial revolutions have resulted in new and evolving social institutions that aimed at creating a level playing field and more socially equitable outcomes of the massive transformations induced by technology. These institutions have often been established through hard-fought social struggles as much as cooperative negotiations.

This time it is no different, except that the world economy has become more interdependent and the time span for action is limited. Realising Sustainable Development Goal (SDG) 8 – decent work and economic growth – by 2030 in the context of the fourth industrial revolution calls for a strong, urgent and proactive policy agenda. It must be an agenda with new policy tools and mechanisms that fulfil the universal values of social justice and inclusive development, while addressing the new challenges that industry 4.0 brings for the world of work.

What should such a policy agenda include?
First, it must promote new, quality job opportunities through investment in infrastructure, education and health, as well as in the care and green economies. This will not only boost employment growth but also contribute to and accelerate the realisation of several other SDGs.

Second, it must protect the rights of disadvantaged groups and those populations that are made vulnerable by technological transformations. Facilitating people’s transition to new jobs needs to be one of the central pillars of industrial restructuring and employment policies.

Third, it needs to use fiscal policy and bespoke labour market policies to support young women and men’s transition from school to work. These policies have proven effective when implemented under appropriate conditions. Today, it is estimated that 22 per cent of young people are neither in employment nor in education or training. These are the so-called NEETs, who are reflected in an indicator of SDG 8. More than three quarters of NEETs are female.

Fourth, it must focus on the crucial need to redesign education systems to make them more inclusive and relevant. The policy agenda also needs a new perspective on lifelong learning systems that can enable continuous up-skilling, reskilling and multi-skilling. New jobs and new industries demand higher and different types of skills. The digitalisation of the economy in all sectors means that investment in digital skills is essential. Distributing training and offering up-skilling opportunities to those who need them most can be a powerful means to reduce inequalities. They can also mitigate the risks of polarisation in the labour markets.

Fifth, it must rethink and reinvigorate institutions of dialogue, cooperation and bargaining for promoting equitable outcomes.

Lastly, it must devise social protection systems. These include systems for non-standard and new diverse forms of employment, such as part-time work, teleworking, work through the sharing or platform economy, work on demand, or self-employment contracts. These areas of work are expanding, and too often do not benefit from the regulatory frameworks and protections afforded to regular full-time employment.

This is an ambitious agenda. We all know the significance of decent employment for social cohesion and to achieve all the goals of the 2030 Agenda – including eradicating poverty, promoting gender equality, reducing inequalities and promoting peace and resilience. We also know what unmet aspirations for decent work can breed in terms of social unrest, conflict, violence and massive displacements.

Making good on the promise of the 2030 Agenda and SDG 8 in an era of rapid technological transformation needs full mobilisation and partnerships of governments, the corporate sector, social partners and institutions of labour market governance.