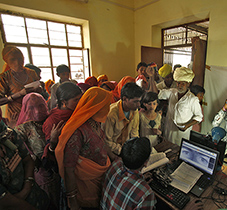 Villagers crowd inside an enrolment centre for the Unique Identification (UID) database system at Merta district in the desert Indian state of Rajasthan February 21, 2013. In a more ambitious version of programmes that have slashed poverty in Brazil and Mexico, the Indian government has begun to use the UID database, known as Aadhaar, to make direct cash transfers to the poor, in an attempt to cut out frauds who siphon billions of dollars from welfare schemes. Picture taken February 21, 2013. REUTERS/Mansi Thapliyal (INDIA – Tags: BUSINESS SOCIETY POVERTY SCIENCE TECHNOLOGY) – RTR3EDSK