The digital age offers huge potential to generate data that can inform government policies to achieve the SDGs. But is data generation and collection helping those communities most in need and, if not, what can be done to ensure it does? 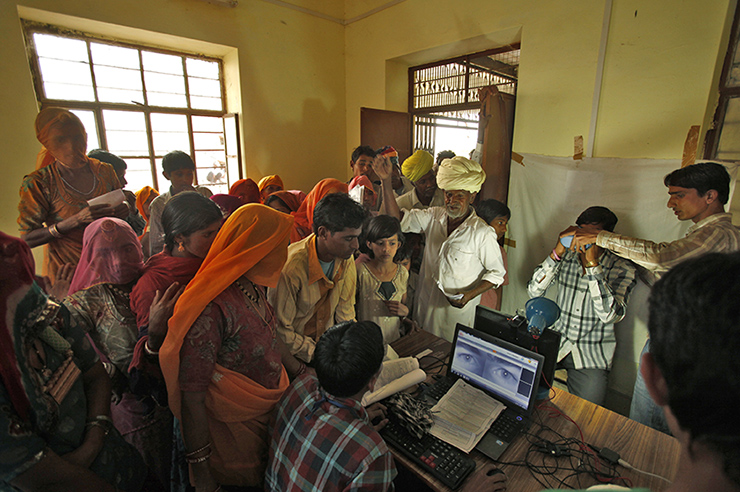 Enrolment at a centre for the unique identification database in Merta, India. This ambitious nationwide programme not only aims to reveal demographics but is also used to make direct assistance payments to the poor
© Reuters/Mansi Thapliyal

The digital age offers huge potential to generate data that can inform government policies to achieve the SDGs. But is data generation and collection helping those communities most in need and, if not, what can be done to ensure it does?

In 2007, Google Trends tells us there were no searches using the term ‘data revolution’. Since then, the popularity of the phrase has been on a steady upward trend, reflecting a growing interest among governments, multilateral organisations and civil society in all things quantitative.

Why the sudden interest? The first reason is, perhaps, a certain level of panic. In September last year, UN member states agreed the 17 new Sustainable Development Goals (SDGs). It is still being finalised, but the list of indicators that countries will have to report on to track progress on the goals comes in at well over 100. Not only that, but the commitment to ‘leave no one behind’, if observed fully, means the data will have to be reported to a much higher level of detail than ever before, so that the progress of specific marginalised groups can be tracked over time. For many countries this will mean investing in entirely new data – and for most countries, it will mean doing things differently and better than before.

A second reason is opportunity. With the rapid growth of new technologies – satellites flying overhead every few minutes, mobile phones reaching the most remote villages, computing power making the manipulation of vast datasets a matter of a few clicks – the possibilities to improve our understanding of the world through data are expanding every day. While previous generations had to do the best they could with imperfect knowledge, today’s decision-makers have a vast array of facts available to them. Or rather, some of them do. One of the defining features of today’s data landscape is inequality between countries, people and issues.

Margins of error
While governments in many Organisation for Economic Co-operation and Development countries are in a position to experiment with new measurements, real-time data and innovative ways of opening up data for use, for many of the poorest countries in the world this is a luxury they cannot afford. Some of the basic building blocks of data for decision-making are simply absent.

A majority of African countries do not, for example, have complete systems for collecting data on births and deaths. This means that, to take one critical indicator, maternal mortality rates in most countries are based on estimates – estimates that themselves rely on data from household surveys that are often years out of date. These estimates produce national averages of the number of women who die every year, with large margins of error.

The methods used for estimation were developed partly to help monitor the Millennium Development Goals, and while they might be adequate for monitoring goals at a global level, they are almost entirely useless for governments trying to make policy to achieve them. If a government is trying to run a health service for pregnant women, but does not know in what region or district the highest maternal death rates are, it cannot allocate resources effectively to solve the problem.

The data deficit is partly a consequence of lack of resources – governments struggling with inadequate budgets are unlikely to invest in the latest data technologies. Donors have traditionally spent very little money on supporting national data systems – just 0.24 per cent of all aid in 2013 – and it’s not just money: human resources are in short supply as well. In a familiar scenario, many countries have few trained statisticians and data scientists, and those that do exist are often snapped up by the private sector or non-governmental organisations (NGOs).

Inequalities do not only exist between countries. Unsurprisingly, other inequalities in data also follow disparities in wealth and power – the least powerful people and the issues that concern them are those about which least is known.

Within countries, the poorest are often the worst represented in the statistical record. In Liberia, it can take days of travel on terrible roads, by canoe and by foot to reach the most remote households – so it’s not surprising that the statisticians in the national capital suspect – because by definition it’s impossible to be sure – that they are under-represented in official data.

Data gaps
Sometimes even when people are counted, the most relevant information isn’t collected. For example, we don’t actually know what proportion of children still not going to school have a disability, because the information just isn’t there. Until the advocates started making a fuss, it wasn’t considered important enough to spend the money to collect the information. And, of course, many of the data gaps are most stark on issues relating to women, reflecting broader patterns of gender inequality and women’s lack of power.

Only just over half of all countries have official data on domestic violence, for example. If there’s no information on when and where it’s happening, it’s hard to imagine effective policy to support women victims of violence in their homes. The negotiations between governments leading up to the new SDGs, and the commitment to leave no one behind, have shone a light on the deficiencies in data that will slow progress towards achieving the goals.

Governments, NGOs and others have realised that it is almost impossible to argue with the proposition that, all things being equal, it is better to have more information than less. But, like anything else, data comes at a price. It costs money, time and human effort to collect, and all three are scarce in many countries.

Should data be a priority? Not always, of course. But, for governments, there’s a minimum of data that is critical for effective service delivery – and the investments pay off. In Liberia, for example, even at its lowest post-war ebb the government ran a survey to enumerate the location and condition of the country’s water points. This was critical data for a government trying to rebuild the infrastructure. This same information was invaluable to a different government department some years later, in deciding where to site the health clinics set up to deal with the Ebola crisis – knowing where the clean, reliable sources of water were located was absolutely essential in planning the response to the epidemic.

Improving data systems will be a slow process. Many governments are all too aware of the gaps in their knowledge and how much more effective they could be with more information. Making the resources available for the poorest countries will be a key part of improving data systems, and donors and other partners obviously play a key role.

However, making the most of the new opportunities presented by technology to make data faster, more accurate and more useful will take more than money. It will also mean governments, researchers, the private sector, NGOs and multilaterals working together to see how new data can solve old problems, and how new problems – like concerns about privacy, which can prevent the sharing of potentially useful data between companies and governments – can be solved.

Like so many of today’s biggest challenges, be they in social policy, economic policy, humanitarian response or environmental sustainability, improving data will be a collective effort. There’s no one institution that can make sure that the right data is available to the right people at the right time to drive the best outcomes. But bringing enough institutions together to focus minds and resources on specific problems might just do it, and that is the role of the new Global Partnership on Sustainable Development Data. It was set up following the recommendation of an expert panel whose report, A World That Counts, was presented to the UN Secretary-General in 2014.

The partnership brings together governments, companies, NGOs, UN agencies and other multilaterals determined to do what they can to improve the production and increase the use of data, and start to redress some of the inequalities that mean that the poorest people and the hardest problems are the least well served by current information.

One of the unexpected but very welcome consequences of the negotiation of new global goals has been the focus on the data that is needed to achieve and monitor them. This is the moment for people who care about facts to step out into the political limelight and seize the moment to bring resources, energy and expertise to bear on making the invisible visible, and putting data to work to improve people’s lives.