Climate action is like a blustery day: the sun breaks through, only to be blocked by the next cloud on the horizon. Will COVID-19 hurt or help climate goals? 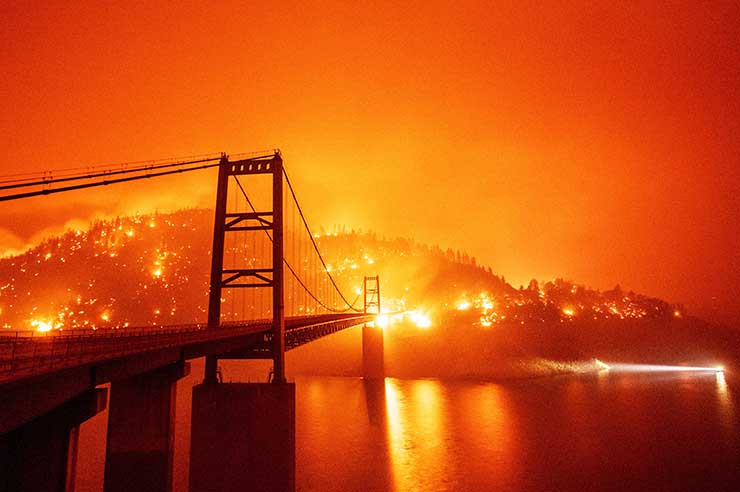 Bidwell Bar Bridge in Oroville, California, during the wildfires. Global warming and changes to rain and snow patterns have increased the frequency and intensity of wildfires. © Josh Edelson/AFP via Getty Images

Climate action is like a blustery day: the sun breaks through, only to be blocked by the next cloud on the horizon. Will COVID-19 hurt or help climate goals?

In the short term, COVID-19 has unquestionably made both climate action and accomplishing the UN Sustainable Development Goals more difficult. Hundreds of millions of people have lost their jobs because of the virus and the recessions it has spurred. COVID-19 has widened economic inequalities. The World Bank projects that its fallout will push 70 to 100 million more people into extreme poverty, reversing years of declines, most of them in South Asia and sub-Saharan Africa. India’s economy has been hit particularly hard. The Organisation for Economic Co-operation and Development projects that India’s GDP will drop by 10 per cent this year. We cannot address a global climate crisis without also addressing social and economic inequities – within countries and across the globe.

In response to COVID-19, governments and central banks have yielded at least $15 trillion in stimulus funds, close to one fifth of global GDP this year. Surprisingly little of this funding has gone to green energy and clean technology industries – less than 1 per cent, according to Bloomberg News. To date, we have missed the economic and climate opportunity the world seized with stimulus funds a decade ago, jump-starting the solar and wind industries and more. We will not get that money back.

Fossil carbon dioxide emissions will drop this year, but still be far from zero. Our work through the Global Carbon Project, led by colleague Corinne Le Quéré at the University of East Anglia, showed how rapid the declines have been. We developed near-real-time estimates of carbon dioxide emissions and gathered data across transportation, electricity, manufacturing and other industries. We then combined our new data with a confinement index that helped us understand how many billions of people were under shelter-at-home rules and other constraints to slow the spread of the virus.

In early April 2020, daily CO2 emissions were down 17 per cent globally compared with the same day in 2019. The numbers were even more striking for individual countries, with average peak declines in fossil carbon emissions of 26 per cent. These declines were relatively short lived, however.

In fact, despite all of the economic upheaval and ongoing disruption, we estimate fossil carbon dioxide emissions this year will drop by 4 to 8 per cent from 2019’s record of almost 37 billion metric tons. A decline in this range would be the largest since World War II, and perhaps ever. However, fossil CO2 emissions will still approach 34 billion metric tons in 2020. Until we drive emissions down close to zero, our climate will continue to warm and people will suffer unnecessarily.

One of the reasons that most crises have not had a greater effect in reducing the climate problem is that they are, by definition, temporary. In the throes of the financial crisis of 2009, global carbon emissions fell by 1.4 per cent for one year. They then rose 5.1 per cent the next year when the global economy grew again, because energy production had not undergone structural changes. Emissions returned to normal when economic growth returned.

The relevance to COVID-19 is clear. Global GDP is projected to drop by 4.5 per cent this year but rise by 5 per cent in 2021. If that’s the end of the story, we will not see lasting change from the effects of the virus on global carbon emissions.

In contrast, some transformations from COVID-19 seem likely and could reshape the global economy through climate action. The global electricity sector is starting to wean itself off coal, the most polluting of fossil fuels, and COVID-19 is speeding the transition. Coal consumption is down by half or more across the United States and Europe from its peak a decade or so ago, replaced by natural gas and, in places, renewables. The global economy has created far more new jobs in the wind and solar industries than it has lost in the coal sector. This energy transition is saving hundreds of thousands of lives, too, by reducing air pollution.

COVID-19 could certainly transform transportation, reducing consumption and enhancing the switch from fossil oil to renewables. Airline travel may never completely return to normal, or could take years to do so. As of mid-September 2020, the number of scheduled flights around the world is still down by half compared with the same week in 2019. In contrast, car and truck traffic have mostly returned to normal, and so have their emissions.

We must not squander the opportunity to reimagine transportation. Telecommuting is here to stay. Cities are rethinking mobility, with streets that were closed because of COVID-19 opening permanently only to pedestrians and cyclists. Clean energy coupled with electric cars could restore the blue skies that appeared like magic in cities around the world, without us having to stay home. Pollution from cars and coal still kills millions of people worldwide each year, even more than the incomprehensible loss from the virus so far. There are plenty of other good opportunities: clean energy storage, linking renewables to hydrogen production, a ‘cash for clunkers’ vehicle exchange programme, tying green strings to airline and auto bailouts, and helping farmers restore their soils.

The UN Environment Programme estimated last year that global emissions need to fall by 7.6 per cent every year until 2030 for the global temperature increase to stay below 1.5°C. We are likely to see such a decline this year – for one year only. Lockdowns requiring us to shelter at home, and global unemployment are not sustainable ways to cut emissions. Energy efficiency, personal choice, cleaning up the global energy sector while still supplying more energy for a billion people living in poverty – these are some of the things that we need to attain our climate goals.