While levels of conflict worldwide appear relatively unchanged this year, longer term the pandemic may yet have a major impact on political violence and instability. What can the UN and others do to head off the threat? 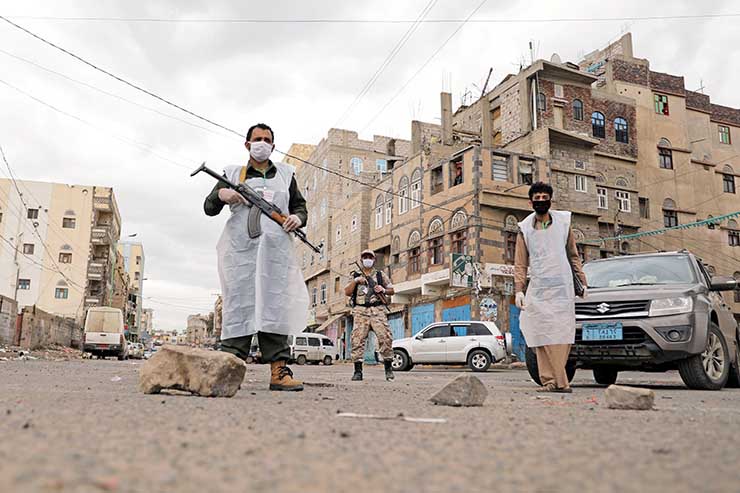 While levels of conflict worldwide appear relatively unchanged this year, longer term the pandemic may yet have a major impact on political violence and instability. What can the UN and others do to head off the threat?

When COVID-19 began to spread in the first quarter of 2020, it seemed poised to have a significant impact on wars and political violence worldwide. The virus seemed likely to strike countries in conflict especially hard, overwhelming their war-weakened public health systems, and create instability in other fragile states. To the extent there was any reason for optimism it was in the hope that the pandemic might encourage combatants to pause hostilities and cooperate to contain the virus.

Neither element of this vision of the impact of COVID-19 on conflict has proved entirely correct. The overall effect of the virus on most existing wars has – so far – been limited. The virus has spread in conflict zones like Yemen and Afghanistan, although it is hard to get reliable data on infections in such cases. Yet the humanitarian effects to date have not been quite as disastrous as first seemed possible. But nor has there been much of a pause in hostilities.

Some analysts have argued that the pandemic has even inspired some states and armed groups to pursue military adventures, knowing that other powers and organisations like the United Nations have been distracted. Indian commentators have cited China’s efforts to expand control over disputed territory in the Himalayas as an example of this. But it is impossible to prove that Beijing would not have followed a similar strategy regardless of coronavirus.

It is equally difficult to evaluate the precise impact of the disease and its economic effects on some of this year’s major protest waves, such as the movement sparked by the police killing of George Floyd in the United States and post-electoral anti-government rallies in Belarus. In both cases, citizens were angered by the authorities’ mishandling of COVID-19, and this may have been one factor in their decisions to take to the streets. But far deeper-seated sets of injustices ultimately underpinned these protests too.

Elsewhere, there is firmer evidence of the disease encouraging violence. In March and April, security forces enforcing lockdowns in response to coronavirus in countries including Kenya, India and Nigeria inflicted casualties on protesting civilians, although in none of these three cases did the initial incidents of violence spiral into more widespread bloodshed. In Colombia, armed bands claiming to enforce quarantine rules have tightened their grip on areas associated with drug trafficking, encountering little resistance from state authorities and massacring civilians.

At the same time, hopes that the pandemic might prod some parties to suspend hostilities have generally not panned out. When UN Secretary-General António Guterres first called for a global ceasefire in response to COVID-19 on 23 March, fighters in over 10 countries expressed interest in the idea. But rebel groups that paused violence in countries including Colombia and the Philippines returned to violence after a month or so. In other cases, such as Libya and Ukraine, political leaders merely nodded to the concept and kept fighting without a break.

Positive examples
There have been some positive examples of political and military rivals working together on technical measures to control COVID-19. In Georgia, for example, officials representing Tblisi and the breakaway region of Abkhazia collaborated on health issues. The duelling factions in Venezuela also agreed to cooperate on the pandemic, although political tensions remain high.

Another positive development has been that international peace operations and mediation efforts have kept going, albeit with restrictions. As the disease escalated, UN envoys could not travel by air. Peacekeepers in countries such as Ukraine and Mali had to limit their patrols. Like everyone else, mediators say they struggle to run effective meetings on Zoom. Yet the UN and other peacemakers did not suspend their peace efforts altogether.

The bottom line is that levels of political violence and conflict worldwide seem to have remained roughly stable this year. COVID-19 does not appear to have been sufficiently catastrophic to affect the calculations of leaders already locked in conflicts.

This may be a symptom of the disease itself, which while undeniably disruptive does not cause mass fatalities among those of fighting age.

Yet, looking ahead, the pandemic may still have a major impact on conflict and instability.

The economic impact of the disease – leading to a global recession or depression that could hurt poor states especially badly – may prove more disruptive than its initial health effects. Economic pressures linked to the pandemic have already fuelled protests and disorder as far apart as Lebanon and Thailand. While protestors’ immediate grievances include issues like unemployment, the economic impact of the pandemic has also highlighted deeper concerns over inequality and poor governance.

Similar issues fuelled first protests and then conflicts that swept the Arab world in 2011 in the wake of the 2008–09 global financial crisis. It is possible that COVID-19 could lead to a similar cycle of disorder and violence in the medium term.

The World Food Programme and other UN agencies have also highlighted that coronavirus-related supply-chain disruptions and rising food prices have increased levels of food insecurity in conflict-affected states like Burkina Faso. Beyond the humanitarian implications, if this trend continues, it is likely to lead to unrest and – just as bread riots preceded  the Arab revolutions – foster further political turmoil.

The global downturn may not only lead to economic stress and social discontent in weak states, but also to cuts in international aid. In July, the UK announced reductions of nearly £3 billion in its 2020 aid spending (or 20 per cent of its annual budget).

Aid officials and diplomats will find it harder to invest in conflict prevention and assist fragile states facing economic emergencies.

And while the initial impact of the disease in conflict-affected areas was sometimes milder than expected, new waves of COVID-19 could still create humanitarian crises. In late August, a rapid increase of infections was reported in Gaza, threatening to put the densely populated area’s weak health systems under immense strain.

COVID-19 has additionally exacerbated pre-existing tensions in the international system – not least at the United Nations – that could complicate future multilateral crisis management. Disputes between China and the US over the origins of the disease in Wuhan not only led the Trump administration to announce its withdrawal from the World Health Organization, but also delayed the Security Council passing a resolution backing the Secretary-General’s global ceasefire idea by three months.

These tensions have not stopped the Security Council keeping up with other business, such as renewing the mandates for ‘blue helmet’ peace operations. Nonetheless, the Council’s rifts over the COVID-19 resolution do not bode well for its ability to respond to future crises driven by the virus.

Multilateral action
Secretary-General Guterres has responded thoughtfully to the crisis, not only in his global ceasefire appeal, but also in broader calls for international efforts to address the economic and social effects of COVID-19. UN officials note that the pandemic and its economic consequences have highlighted the need to concentrate on many of the priorities, such as reducing inequality and improving governance, in the Sustainable Development Goals adopted in 2015.

Whether Member States will rise to the challenge through multilateral action is an open question. Although COVID-19 has not (at least yet) decisively reshaped the global conflict landscape, it has raised questions about how effectively the UN and other multilateral institutions – and the big powers that dominate them – can handle global shocks in an era of international friction.