Transformation is the only response to populism. The SDGs are the roadmap 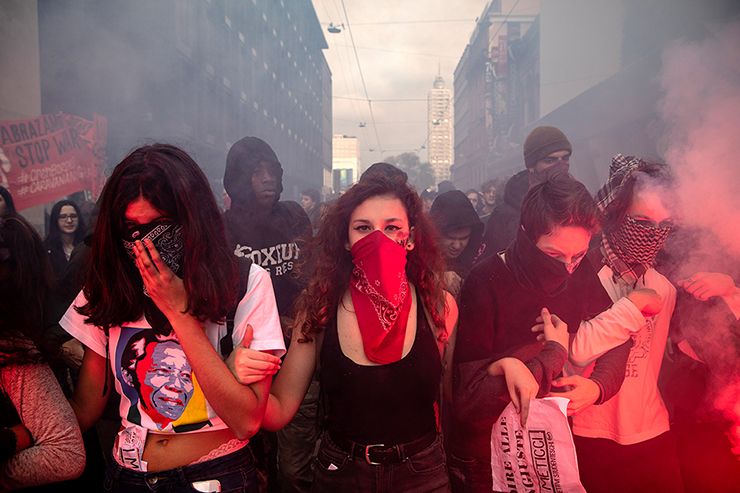 Demonstrators take part in ‘No Salvini Day’ in Milan, Italy, protesting against what they view as inhumane government policies on immigration. The surge in populist leaders around the world threatens the SDGs.
© Emanuele Cremaschi/Getty Images

Transformation is the only response to populism. The SDGs are the roadmap

The rise of populism in recent years, on left and right, has raised concerns about a new era of divisiveness. This is the main electoral strategy of populist parties, defined not so much by common policies as by a common political playbook: divide the public and discredit opponents.

According to some estimates, the number of populists actually in power around the world has quintupled since 1990, including in some of the world’s largest countries. This is not to mention all the populist movements not actually in power but influencing the political landscape.

Populism is always harmful, leaving behind societies that take generations to heal. Normally, it is the already marginalised, either socio-economically or ethnically, that are most damaged by populism’s deluge of rhetoric and real-life political upheavals. And the line between rhetoric and actual violence, which tends to require demonising the intended victim first, can be worryingly thin.

On the other hand, it is not hard to see populism’s appeal. The future is always uncertain, but in today’s world a number of factors make it more precarious than anyone can remember. The financial crash in 2008 destroyed confidence in the political classes paid to manage the economy. Meanwhile, continued rapid technological advance makes it hard to know what is around the corner for one of the ingredients of any successful society – decent jobs. Add mass migration to the mix for the perfect storm.

And people often do have every right to be angry or worried. Whether they have been excluded from the progress seen in the 20th century or benefited from it, they now see bleaker futures for their children.

Populist leaders promise rapid change for those that want it, or a return to some kind of glorious past for those that don’t, evoking images in the human psyche that bear little relation to reality. Sometimes they offer both. Change is either too fast or not fast enough, depending on the flavour of populism taking advantage of people’s thirst for opportunity and wellbeing.

But while populists are criticised for offering simple solutions, the same criticism could be levelled at those non-populists (we could call them liberal globalisers, or small-c conservatives) that have held power over the last few decades. They have overseen, in many countries, increasing inequality and threats to the natural world. Their failure to deal with the fundamentals of inequality and unsustainability is the basis on which populism now thrives.

Neither group has the answers to today’s complex questions. So who does? It is almost ironic that, in this most uncertain and divided of eras, the world also has in its hands, for the first time, a comprehensive plan to deal with pretty much all the major challenges it faces. Sure, it’s only a piece of paper signed in a building surrounded by flags, and it doesn’t change the real-world politics raging outside. But there is, nevertheless, a roadmap to a more equal, sustainable future, supported (at least formally) by all the countries in the world.

The SDG roadmap
Agenda 2030, the document which presents the Sustainable Development Goals (SDGs) to the world, is neither populist nor conservative – it is inclusive and transformative. We are so used to the main aspects of the SDGs by now that we forget how powerful they are as part of a real-world response to both populism and small-c conservatism, the precursor of populism. The SDGs do what both populists and small-c conservatives fail to do:

The focus on evidence and data, which perhaps in previous times would have seemed simply a parenthesis, is the solid core of the SDGs. It becomes a political position in an era when fake news competes with fact for the public’s attention. Science is with the SDGs, and that makes them at least somewhat more likely to prevail.

Crucially, they go way beyond principles. One common source of despair is simply the gigantic size of the task ahead. And indeed anyone who thinks they have all the answers to this complex global situation is kidding themselves and probably many others. But we have quite a lot of them.

Basic principles
This is the time for cool heads, for clear principles and for remembering the basics. While we keep working on what we don’t know, let’s implement what we do. Focus on women’s rights. Invest in clean energy. Increase spending on public health and education, on public water and housing. Reduce irresponsible consumption. Act on threats to climates, oceans and forests.

These policy directions are now so well known as to be almost glib. But perhaps we didn’t anticipate the threat they would be under, not in politics (we always knew political will would be hard to mobilise) but in theory: actually having to win the battle again on these basic policy facts.

The SDGs in 2019, then, play a role that their authors perhaps did not anticipate. Not only are they a vision for a better world. They are now also a bulwark against attempts to backslide not only on promises made, but on scientific facts accepted, and on proven fiscal and social policies backed by hard evidence and accepted by acclamation in September 2015.

So having this roadmap matters. But a roadmap is only a small part of reaching a destination and, annoyingly for all those who worked so hard to set the SDGs on their way, probably the easy bit. Now we need the vehicles, the fuel and the drivers. And that is where those of us engaged with the SDG effort need to step up our game. Because although transformation is implied by the SDGs, there are still too many parts of the international development ecosystem that don’t quite get it. We say we want radical change, but don’t seem to quite grasp what that means.

Some cling to a kind of comfort blanket of seeing the SDGs as just an extension of the Millennium Development Goals: MDG+. This agenda was good while it lasted but the world has moved on fast. Anything that sets out to paper over the cracks again or stick plasters on wounds – anything, in short, that resists a holistic and transformational approach – is going to lose out to populism.

Small-c conservatism, rolling with inequality and unsustainability, is not an option. Populism is a wrong turning. Transformation is the only way forward.

We have the roadmap in the SDGs, the perfect counter to populism. But most politicians are still only coming to them half-heartedly. Why haven’t they embraced them? The SDGs should be fully integrated into national manifestos, not left in the hands of foreign ministries, only to be discussed at UN forums. The SDGs only work globally if they are implemented nationally, in North and South. Sometimes it seems that the private sector is more at home with the SDGs than the political classes. This has to change.

Things are beginning to fall apart in many parts of the world, always related to equality: either the thirst for it, or the backlash against it. How countries respond will define the 21st century. There is no point just rallying against populism. We have to rally for something better.