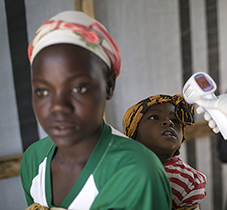 A health worker checks the temperature of a girl at the entrance to a Red Cross facility in the town of Koidu, Kono district in Eastern Sierra Leone December 19, 2014. Sierra Leone, neighbouring Guinea and Liberia are at the heart of the world’s worst recorded outbreak of Ebola. Rates of infection are rising fastest in Sierra Leone, which now accounts for more than half of the 18,603 confirmed cases of the virus.
REUTERS/Baz Ratner (SIERRA LEONE – Tags: HEALTH DISASTER) – RTR4IP6W