The 2014 Ebola outbreak in West Africa showed the devastating effect of deadly epidemics – not just for the victims, but for the broader health and prosperity of host countries. How can the international community build resilience against future outbreaks? 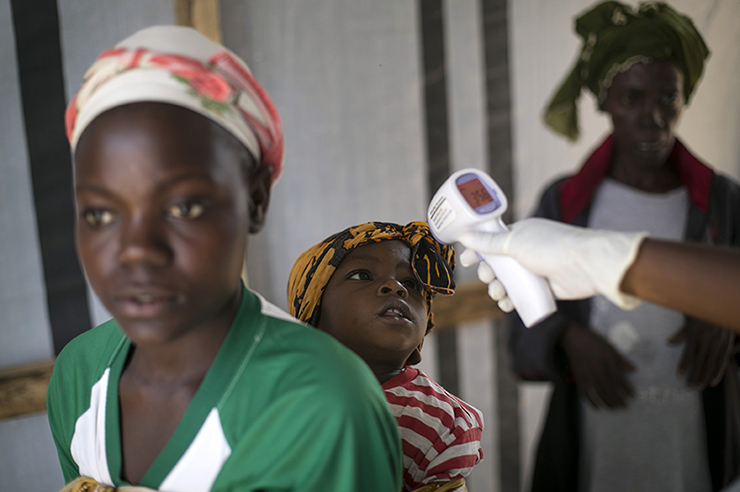 Temperature checks at the entrance to a Red Cross facility in Sierra Leone. In 2014, Sierra Leone, neighbouring Guinea and Liberia were at the heart of the world’s worst recorded outbreak of Ebola  © Reuters/Baz Ratner

The 2014 Ebola outbreak in West Africa showed the devastating effect of deadly epidemics – not just for the victims, but for the broader health and prosperity of host countries. How can the international community build resilience against future outbreaks?

The World Health Organization has identified six pillars on which health systems are based: services; workforce; information; medical products, vaccines and technologies; financing; and leadership and governance. Key to a functional health system that can equitably address the needs of a population are resources, which encompasses inputs such as: fiscal provisions; human resources; physical infrastructure and capital;  drugs; medical supplies; commodities; and governance.

In Africa, however, health systems face multiple challenges in finding sufficient resources to provide universal access for citizens. Economic crises, environmental disasters, outbreaks of infectious diseases, malnutrition, rapid urbanisation and post-conflict fragility often expose and aggravate the weaknesses of these health systems. Health system resilience, therefore, can be defined as the capacity of health actors, institutions and populations to prepare for and effectively respond to crises, maintain core functions when a crisis hits and, informed by lessons learned during the crisis, reorganise if conditions require it.1

A new kind of epidemic
The 2014 Ebola outbreak was the first of its kind to occur in West Africa, where it commenced in Guinea and later spread to Liberia, Sierra Leone, Nigeria, Senegal and Mali. There have been more cases and deaths in this outbreak than all others combined. The 2014 epidemic is unique not just because it occurred in an area never affected before, but also because it showed greater propensity to spread across national borders and even continents as the virus travelled to Europe and North America.

Ebola impacted on the development of the affected countries, particularly on the three countries with wide and intense transmission: Liberia, Guinea and Sierra Leone. According to a recent report released by the World Bank Group on the economic impact of the virus, in the ‘low Ebola’ scenario, West Africa as a whole suffered an estimated loss in GDP of $2.2 billion in 2014 and $1.6 billion in 2015.2

In the case of ‘high Ebola’, estimates suggest $7.4 billion in lost GDP for 2014 and $25.2 billion in 2015. Both cases assume at least some spread to other countries. Factors contributing to the growing cost of Ebola include direct costs of the illness (government spending on healthcare) and indirect costs, such as lower labour productivity as a result of workers being ill, dying or caring for the sick. Reflections on the disease by the UN Economic Commission for Africa alarmingly show that economic activity shrunk.3 This contraction reflects multiple cross-currents: falling sales in markets and stores; lower activity for restaurants, hotels, public transport, construction and educational institutions (also caused by government measures such as a state of emergency and restrictions on people’s movements); and slowing activity among foreign companies as many expatriates  left, resulting in lower demand for some services.

Epidemics such as Ebola can also increase morbidity and mortality from diseases not related directly to the epidemic itself, given the various combined effects on regular healthcare provision. For example, in the midst of an outbreak, fewer people tend to seek formal medical attention because of fear or stigma of being exposed to the disease. Weakening health services can allow the incidence of other diseases to rise, including malaria, dengue fever and yellow fever. If healthcare systems have fewer resources for vaccinations or antenatal and child healthcare, maternal and infant mortality rates can rise. This is a particular problem in Africa, where a significant proportion of the population comprises women and children.

Indeed, women and children are as afraid to seek care during an outbreak of a disease like Ebola as the healthcare workers are to treat them, especially when patients present with symptoms similar to that of Ebola, notably fever, diarrhoea, rashes, difficulty breathing and swallowing, coughing and bleeding. If pregnant women experience such symptoms but do not seek urgent medical help, it can lead to still or premature birth or even the death of the mother. For children, not seeking urgent medical help due to the Ebola situation can complicate any childhood-related illness, most often leading to death.

UNICEF estimates that 5,000 children died during the Ebola outbreak. Another 16,000 lost a primary caregiver and some five million missed significant periods of school. This has had an important impact on human development in the affected countries. Assuming that the level of education has a causal relationship with economic growth, then the epidemic has also threatened countries’ future productivity due to the lower education of those who do not return to school – which will also require heavy additional investment in an attempt to bring educational outcomes back to pre-outbreak levels. In addition, even with fewer children in the classrooms, teachers’ wages still need to be paid and facilities maintained.

The costs encountered during the Ebola outbreak re-emphasise the fact that health is both a beneficiary of and a contributor to development, and that investments in health enhance economic development. Health is therefore much more significant to poverty elimination than previously thought. Just as epidemics affect economic development, projects intended to support development can also impact negatively on the spread of epidemics.

Water, for example, has come to be perceived in terms of its value for agriculture, electricity generation or private profit, rather than a social determinant of health. This has put potable water (in plastic bottles) beyond the reach of most poor populations in Africa, resulting in inadequate hygiene and the persistence of cholera and other diarrhoeal diseases.

Similarly, environmental impact assessments of infrastructure projects rarely take into consideration health impacts. Yet, the construction sector and building sites with a predominantly migratory labour force are often breeding grounds and routes of transmission for infectious diseases such as tuberculosis, HIV/AIDS and other sexually transmitted diseases.

Large construction projects have also been implicated in the spread of diseases like malaria. The development of irrigation projects, dams and other construction sites often leads to new bodies of standing water, which create ideal conditions for the proliferation of mosquitoes.

Given globalisation and the speed of human contact and mobility, there is a need to strengthen global health security through sustained surveillance, detection, preparedness and response at national, continental and global levels. Health systems must be resilient enough to absorb the shocks and sustain the gains already made, or risk having decades of investment wiped out. Strengthening health systems for equity and development in Africa requires a comprehensive strategy that includes:

It is in this context that during the African Union Special Summit on HIV, tuberculosis and malaria in Abuja in July 2013, governments acknowledged the need to establish an Africa Centre for Disease Control (CDC). This conducts life-saving research on priority health problems in Africa and serves as a platform to share knowledge and build capacity in responding to public health emergencies and threats.

The Ebola outbreak in West Africa underlined the need for action. It provided the impetus for speeding up the establishment of the Africa CDC for early detection, preparedness and response, as well as for building Africa’s medium and long-term capacity to deal with public health emergencies and future threats.