Cities as a means to the SDGs: London case study

Cities have a stake in virtually every aspect of the SDGs and they have been quick to embrace them. Their progress will hold lessons for all levels of government 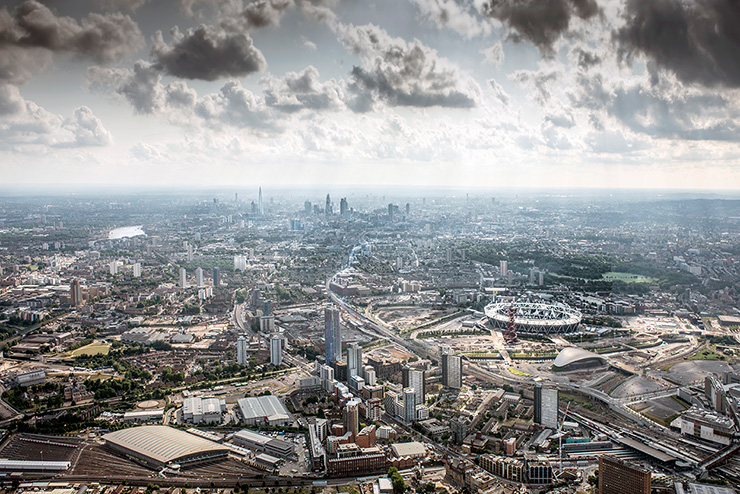 The view over London from the Olympic Park towards the City. The Olympic Park was built on a brownfield site and its development involved decontamination and the creation of more than 45 hectares of wildlife habitat. The site now provides housing, offices and recreation. © Howard Kingsnorth/Getty Images

Cities as a means to the SDGs: London case study

Cities have a stake in virtually every aspect of the SDGs and they have been quick to embrace them. Their progress will hold lessons for all levels of government

Cities manage civic functions on a scale that makes them uniquely well placed to further the Sustainable Development Goals (SDGs). The dynamics between the various Global Goals are visible at a city level. The levers to address them are frequently within the remit of coordinated city authorities. And the quality of a city’s performance and the reasons behind it tend to be more exposed to public scrutiny.

In terms of population alone – home to nearly four billion people, over half the world’s population – cities merit particular attention. Their importance to the SDGs will only increase: by 2030, city inhabitants worldwide are projected to rise to five billion.

As one of the world’s largest, most diverse and successful cities, the experience of London should yield constructive lessons for others. The city, ranked as having the fifth largest economy of any city in the world, accounts for 22.7 per cent of the UK’s economic output. And according to the 2011 census, 37 per cent of its just over 8 million population had been born outside the UK.

London has its own independent body to guide sustainability: the London Sustainable Development Commission (LSDC). This promotes sustainable development in London and provides independent advice on the sustainable nature of London-wide strategies, including those produced by the Greater London Authority (GLA), the capital’s top-tier administrative body.

First established by the Mayor of London in 2002, the LSDC comprises key representatives from London’s economic, social, environmental and governance sectors, who give their time voluntarily. The LSDC is supported in its work by a secretariat provided by the GLA. It undertakes strategic work – at present specifically on clean tech and green finance – and continues to measure London’s performance on quality of life.

As a Commissioner, I have overseen the publication of two Quality of Life reports in 2012 and December 2017. The reports started back in 2004 and give a picture of London’s journey in becoming a more sustainable city. The analysis in each report draws on existing data sets to examine key indicators to gauge progress for people living and working in the capital, and sets out progress since the previous report. The metrics provide evidence to help guide decision-makers in taking the actions needed to improve the quality of life of all Londoners – present and future – and to help London play its full role in meeting global sustainability goals.

For the first time, the indicator set is now held on the London Datastore, a free and open data-sharing portal where anyone can access data relating to the capital. The indicators used are the responsibility of a range of organisations and bodies across London, including the Mayor, London boroughs, businesses, central government and other stakeholders in the private and public sectors.

The report collates existing data of indicators across the three interrelated areas of sustainability: environment, social and economic. In doing so, it provides a more holistic snapshot of London’s quality of life and how sustainably the city is developing. Many of the indicators are, as you might expect, relevant to the SDGs, covering (for example) water, waste, carbon, education and security. In fact, the report identifies the relevant SDGs against each of its own indicators, although they are not a perfect match.

How does London measure up?
The latest report examined 32 key indicators and compared performance with earlier analysis published in previous reports. The good news is that London is making progress, with many indicators heading in the right direction. For instance, the percentage of journey stages made in London by public transport has increased from one of the lowest in comparable European cities in 1995 to higher than Stockholm, Paris, Brussels and Berlin in 2012.

London continues to be an economic powerhouse: gross value added per head in 2015 was more than 70 per cent higher than for the UK as a whole, or any other UK region. And more than a quarter of Londoners volunteer, giving back time, skills and energy to their communities.

However, we need to do more in key areas, and step up the pace of activity, to ensure that London becomes a truly sustainable megacity fit for the challenges of the 21st century. For example, the report also highlights an increase in social inequalities in London, with a widening of gaps in, for instance, access to affordable housing.

This is backed up by data for the lower quartile: between 2011 and 2016, the cost of house prices rose from nearly 10 times earnings to almost 14. Essentially, buying a house in London became 40 per cent more unaffordable over that period. Economic fairness also comes under the spotlight: Londoners’ disposable income varies  widely by borough, and the most recent data reveal that nearly two in five children live  in poverty.

The report also highlights areas in which the LSDC believes progress is being made, but where concerns remain about the level of transformation required. Among these is climate change. London’s direct carbon emissions are reducing but will need to continue to do so at scale to keep track with targets set out in the Paris Agreement.

The Mayor has recently published numerous draft strategies with proposals to address these challenges, including on housing, environment, transport, London’s economy and the London Plan (a strategic development plan for London). The LSDC welcomes and is commenting on several of these.

How does London compare with other cities?
It is very difficult to assess London’s performance against other comparable cities, as different indicators are used. This is a pity, as it means cities lose out on the opportunity to share different approaches to policy and activities, or evaluate where they can learn from each other and drive improvement.

However, common reporting against progress in meeting the SDGs could help enormously, by providing a shared framework. The LSDC is encouraging London to consider how best to do this, and will be exploring how the GLA can best help deliver against the SDGs. Elsewhere, there appears to be an appetite to report at a city level, for example in Liverpool and Bristol.

Integrating the SDGs into quality of life reporting
The LSDC wants London to compare its performance against the relevant SDGs. We will be working to revise the Quality of Life indicator set so that future reports allow us to do that.

We have already started the initial work, with a networking event in partnership with UK Stakeholders for Sustainable Development and CAG Consultants to establish which businesses and organisations are working in this area, to see how we can collaborate. During the summer, a more detailed review will start with the aim of advising the Mayor in early 2019 about the best way to revise our city-level indicators.