Achieving the SDGs will require both individual citizens and wider communities to make meaningful, long-term changes  to their behaviour 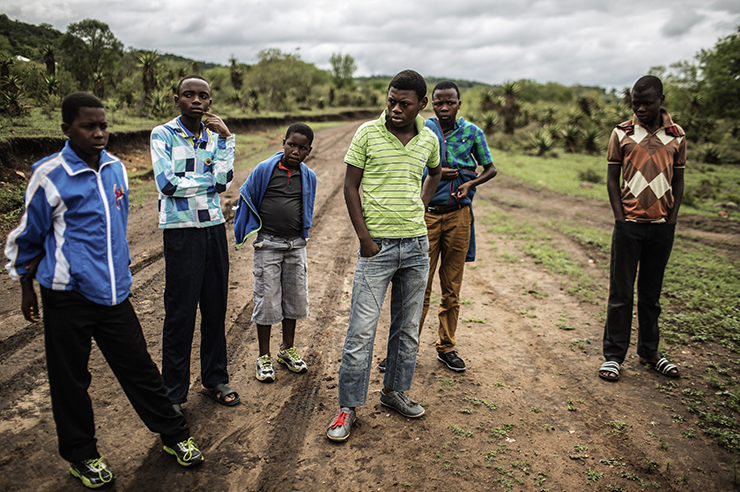 South African boys in the KwaZulu-Natal province wait to be taken to undergo medical circumcision as a form of HIV prevention. Radical and sustained behavioural change is needed to curb the rate of HIV transmissions
© Getty Images/AFP/Gianluigi Guercia

Achieving the SDGs will require both individual citizens and wider communities to make meaningful, long-term changes  to their behaviour

The Sustainable Development Goals (SDGs) that came into effect on 1 January 2016 were developed in consultation with governments, community advocates, businesses and researchers. The 17 goals and 169 targets provide an inspiring, if daunting, “plan of action for people, planet and prosperity”. The contributors who helped draft these goals hope that by setting aspirational, universal targets – and monitoring progress towards them – we can make a sustainable, global difference toward “the future we want”. However, now the goals are agreed, many important questions remain. In particular, who is the ‘we’ who should take action, and what action might make the biggest difference? These questions lie at the heart of significant debates over who should do what, where and how to achieve sustainable progress.

One of the first questions embedded in the debate is whose behaviours should be the focus of change: individuals, societies or institutions (including both state and non-governmental agencies)? On the one hand, behaviour change involves carefully targeted interventions directed towards the individual as the primary locus of change. The ideas of behavioural psychology inform many behaviour change programmes, which seek to understand and influence citizen and consumer knowledge, attitudes and practices through a mix of multimedia and public participation techniques.1

By contrast, social change focuses on the community. As UNICEF notes, social change aims to transform the way political, economic and social power is distributed within and between communities. This approach assumes that significant transformation requires more than targeting cultural practices or ingrained norms. It also necessitates identifying and challenging structural inequalities and the institutions and systems (including economic systems) that lock communities into unsustainable trajectories or prevent capacity-building for longer-term change.

The relationships between individual behaviour and social change are complex. Our daily habits and routines – together with the emotions we attach to places, the presence or absence of influential peers and supportive communities, access to resources, legal regulations, the availability of investment finance and capability-building opportunities – all influence our attitudes, assumptions and actions, often in competing ways. To illustrate this point, it is helpful to reflect on the mixed experiences of the Millennium Development Goals (MDGs) that preceded the SDGs.

In 2013 a UN meeting of heads of state described the outcomes of the MDGs as “uneven” and noted significant gaps in the achievement of the eight ambitious targets, including halving extreme poverty, halting the spread of HIV/AIDS and providing universal primary education. Some actions on the MDGs achieved inspiring results. For example, rates of child mortality in Ethiopia were reduced by 67 per cent in the under-five-year-old population (compared to 1990 levels). In Tanzania, the Helping Babies Breathe programme provided skilled attendants at births, assessed babies, monitored temperatures, offered stimulation to breathe if required, and enabled mothers to keep babies warm and dry, resulting in a reported 47 per cent reduction in neonatal mortality.2

Sustainable transformation
However, such success stories demonstrate that behaviour change is essential for making progress but insufficient as a basis for substantial and lasting change. To achieve sustainable transformation on a large scale, communities also need well-resourced and well-planned wider support. For example, in the case of the MDGs that aimed to reduce HIV transmission, “radical and sustained” behavioural change among a “sufficient number of individuals” was essential for success.3 Yet if individual actions were to be successful on a large scale, these actions also had to be underpinned by political will to plan and target resource support, build capacity and coordinate policy action before significant reductions in HIV transmission could occur. These experiences highlight why behaviour change is essential but insufficient to meet the SDGs. We need far-reaching changes in household behaviours – particularly in the areas of food consumption, transport, energy use and leisure – if we are to achieve more sustainable consumption of natural materials and energy.4

We cannot rely on technological innovation alone to achieve widespread reductions in carbon emissions or biodiversity depletion. No matter how many energy-efficient appliances, home insulation and water-saving devices we produce or install, technical efficiency won’t be enough unless people also change their ingrained habits.5 A more sustainable future requires millions of people to rethink core values and act differently, as the Papal encyclical on climate change powerfully reminds us. Nevertheless, even where citizens are highly motivated to change their behaviour, the experience of the MDGs reminds us that new, pro-sustainability actions will be hard to maintain in the face of major instability, such as a global financial crisis, war or the severe storms and droughts associated with a changing climate.

Despite the MDGs, natural resources have continued to be extracted at unsustainable rates, biodiversity loss has accelerated and global carbon emissions have increased overall by 50 per cent on 1990 levels. This experience is a reminder of the real and significant limits of individual action and benign environmental behaviour change. Achieving the future we want will take more than social marketing, philanthropy and volunteerism. It will also need carefully planned, state-led reform and regulation that can create the social, economic and political conditions that are conducive to effective long-term investment and more sustainable outcomes.

Achieving progress towards the ambitious SDGs is a formidable task. It will require us all to challenge ingrained social norms, powerful vested interests and our cherished values and social identities. This is a much greater challenge than simply devising effective marketing campaigns and encouraging socially desirable pro-environmental action. We can also anticipate that some of the SDG targets may produce conflicting outcomes: for example, reducing trade barriers while ensuring greater security for small-scale farmers, and sustainably doubling food production by 2030 will be a difficult balance to achieve.

Individual and collective action
And yet again, the experience of the MDGs also reminds us that the future is not predictable, and unanticipated change can have exciting, far-reaching impacts in ways we do not yet fully understand. For example, an MDG target of enhancing communication through fixed telephone lines between 1990 and 2005 was dramatically superseded by the explosion of mobile telephone technology in the same period, as subscribers worldwide rose from 11 million to 2.2 billion. This rapid expansion in global connectivity has in turn helped facilitate new forms of online education, commerce and citizen-led political action.

While we cannot rely on technological innovation or environmentally benign behaviour change alone, our understanding of how we can challenge cultural practices and support sustainable and socially just norms is growing. Moreover, there is increasing global awareness of the way in which inequalities influence policy pathways and political action (or inaction). Changing our behaviour as citizens may not be enough to contribute to a more sustainable future, but no constructive change is possible without individual and collective action. We can indeed make a real difference towards the future we want.