At the centre: women, girls and the SDGs 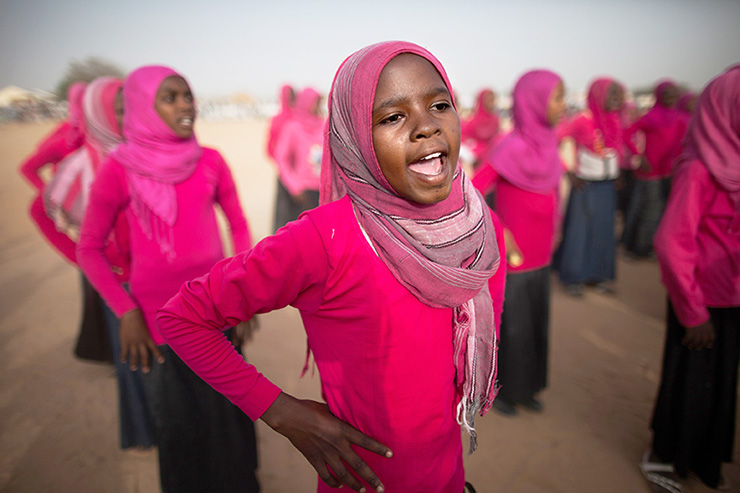 Girls sing and dance at a school in El Sereif, North Darfur. Tribal conflict over goldmines displaced more than 100,000 people to El Sereif and its neighbouring village. The culture of impunity that pervades most conflicts exposes girls to extreme risk of sexual violence. © UN Photo/Albert Gonzalez Farran

At the centre: women, girls and the SDGs

When a girl is denied the right to education due to poverty or social norms, her prospects for employment and self-sufficiency are undermined. So is her ability to contribute fully to the social and economic development of her family and community. When she is married as a child, when she lacks access to sexual and reproductive health information and services, and therefore cannot decide whether or when to get married or become pregnant, her rights are violated. Her potential is squandered and her country’s development suffers.

Millions of girls are forced to drop out of school due to early and forced marriage and teen pregnancy because they lack awareness of, or access to, family planning methods. Millions of adolescent girls and young women are also exposed to HIV, other sexually transmitted infections, and unintended pregnancies. Why? Because they cannot access the information they need to protect themselves through comprehensive sexuality education, or because they have no access to condoms or contraception, or because they are sexually exploited.

An estimated 3.9 million girls were subjected to female genital mutilation (FGM) in 2015. Because of high fertility rates in populations practising FGM, the UNFPA estimates that the number of girls at risk may rise to 4.6 million girls a year by 2030.

These violations of the human rights and dignity of women and girls threaten their lives, health and wellbeing. Complications in pregnancy and childbirth are the leading cause of death among adolescent girls aged 15 to 19 globally. According to the World Health Organization, adolescent mothers face higher risks of eclampsia, puerperal endometritis and systemic infections than women aged 20 to 24. None of this is acceptable. And none of it is good for development.

In 1994, at the International Conference on Population and Development (ICPD) in Cairo, delegates from all regions and cultures recognised the centrality of sexual and reproductive health and rights to individual wellbeing and sustainable development.

As we approach the 25th anniversary of the ICPD and 50 years of UNFPA operations, nations have made significant progress towards universal access to sexual and reproductive health and rights. This includes gains made as a result of the Millennium Development Goals.

Between 1990 and 2015, maternal deaths fell by 44 per cent. Yet, roughly 303,000 women continue to die during pregnancy and childbirth each year, mostly due to preventable causes. An additional six to nine million women suffer debilitating childbirth injuries, such as obstetric fistula. And, while death rates of children under age five declined by 53 per cent during that 25-year period, an estimated 5.9 million children under the age of five died in 2015. Most died of avoidable causes, nearly half within 28 days of birth.

Stillbirth also remains a major neglected problem, with 2.6 million stillbirths estimated in 2015. And in developing regions some 214 million women who want to avoid pregnancy are not using safe and effective family planning methods.

These figures show that ending preventable maternal mortality, newborn and child deaths, and ensuring reproductive rights for all remain an unfinished agenda. These issues are among the world’s most critical challenges. This is why they figure prominently among the Sustainable Development Goals (SDGs) that the global community has pledged to achieve by 2030.

The 2030 Agenda presents a comprehensive, integrated, universal, rights-based and transformative vision for a better world, shared prosperity and peace. It is rooted in gender equality and respect for the rights of all. Above all, it pledges to leave no one behind and to mobilise efforts to that end.

SDG 3 – to ensure healthy lives and promote wellbeing for all – includes targets on the elimination of maternal and newborn mortality. Achieving it will require strong global and national commitments and scaled-up efforts through a multi-sectoral approach.

First and foremost, women and girls must be at the centre of all development initiatives aimed at their welfare. This begins with empowering girls and young women.

An integrated health approach is also key. We must create links between initiatives that promote maternal and newborn health and survival, and the broader sexual and reproductive health and rights agenda.

Some of the main causes of newborn death – such as pre-term birth, birth asphyxia, birth complications, neonatal infection and low birth weight – are directly linked to the healthcare a woman receives during pregnancy, childbirth and the post-partum period.

The UNFPA is the lead UN agency promoting universal access to sexual and reproductive health. In line with the SDGs and the UN Secretary-General’s Global Strategy for Women’s, Children’s and Adolescents’ Health (2016-2030), UNFPA pledged in its new strategic plan to help countries achieve three key transformative results by 2030:

These three results will be predicated on our work in collecting and analysing population data. This will ensure everyone is accounted for and reached in the pursuit of these ambitious aims.

Achieving these results will require that global investments made to date are sustained and significantly scaled up. Investment must ensure:

In addition to these critical investments, it is also vital that we promote gender equality and women’s empowerment by:

The way forward
National ownership, leadership and sustainable financing are essential to meet the Global Goals. These can only be brought about by evidence-informed advocacy and approaches that are appropriate for low-resource settings and that foster quality and process improvements.

Success will depend on strong partnerships at all levels – among development actors, governments, the private sector, faith-based and civil-society organisations and academia. Only strong joint commitments and efforts will enable us to tackle the huge remaining challenges in the broad and multi-sectoral way envisioned in the 2030 Agenda.

Our success will be measured by whether we are able to reach the last mile, particularly the most disadvantaged and marginalised groups, including those in humanitarian settings.

In 2017, UNFPA humanitarian assistance reached roughly 11 million people with sexual and reproductive health services in more than 50 countries. It provided an estimated 3.9 million women and girls with protection and services to address gender-based violence in places ravaged by disaster, conflict or crisis.

Yet there is still much to be done. We cannot claim success until the preventable is prevented for all women, girls and newborns – everywhere.

REACHING THOSE FURTHEST BEHIND

The 2030 Agenda is challenging and complex, but vital for saving lives and promoting health and wellbeing. A culturally sensitive, human rights-based approach is essential, as is ensuring accountability in access to, and availability of, quality services for all.

We must focus our attention on those groups of women and young people at risk of being left behind: indigenous people, rural women, people with disabilities, sex workers, people using drugs, prisoners and other marginalised groups. Indigenous women and adolescent girls, for example, are significantly less likely to benefit from healthcare services. They also have worse maternal health outcomes.

In Guyana, for example, the birth rate for Amerindian adolescent girls is twice that of the general population. Maasai women in Kenya are twice as likely to have had no antenatal care, while San women in Namibia are 10 times more likely to give birth without skilled attendance.

To reach marginalised groups of people and make them and their sexual and reproductive health needs more visible, we need improved disaggregated data on ethnicity and other characteristics. We also need to take positive action to address the socio-cultural and other barriers that prevent these women and girls from accessing quality care.