How can communities ensure that their political decision-makers make good on commitments to turn the SDGs into reality? 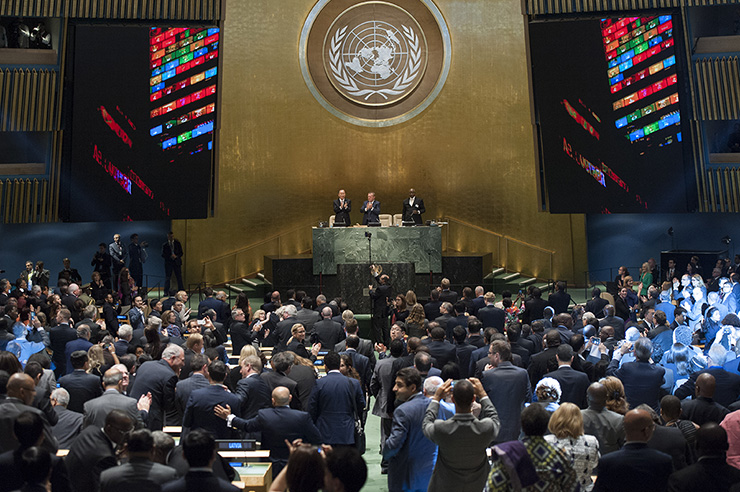 How can communities ensure that their political decision-makers make good on commitments to turn the SDGs into reality?

For the first time in history, world leaders have signed up not just to reduce but also to eradicate extreme poverty and hunger. After years of negotiations over the global Sustainable Development Goals (SDGs), all of us involved in the fight against poverty are now wrestling with how such lofty ambition can be turned into reality.

As the old adage goes, where there is a will, there is a way. So campaigning organisations often turn to political will as the magic ingredient that will ensure their ideas get pushed from the lobbying table to government policy – and then into action. Indeed, many of the reactions following the Sustainable Development Summit last September referred to the need now for political will to deliver.

Celebrating the SDGs
The SDGs need to succeed: they go beyond ‘band aid’ solutions and look to build inclusive and sustainable economic foundations in ways that respect the planetary boundaries. Importantly, the SDGs are for every country, placing obligations on rich industrialised nations over and above the provision of aid.

Worth celebrating also is the standalone goal on reducing inequalities between and within countries. While it was a contentious issue in the course of the negotiations, this goal is no optional extra. Oxfam’s analysis of World Bank data shows that an extra 200 million people will remain trapped in extreme poverty by 2030 unless poor people’s incomes grow faster than those of the rich. If, as a world, we won’t live with poverty, then we can’t live with extreme inequality either.

Political appetite
Of course, the political appetite for the SDGs that was so evident in September was important. The fact that the UN had never played host to so many heads of state at once was good news – and not just for the New York limousine companies. The months of painstaking intergovernmental negotiation that delivered the SDGs provided them with legitimacy and engendered a sense of ownership from all countries that was not present during the early years of the Millennium Development Goals.

But to turn the SDGs into reality requires many more questions to be asked than simply: “Do political leaders really want to do this?” We need to ask what happens when the political will to implement the SDGs is put into conflict with other (and more immediately pressing) political concerns: the desire to win votes or political support from groups of people whose vested interests need to be challenged, for instance. Then there is the question of how effectively political leaders can assert their will over institutions beyond their direct control – multinational companies, for example.

More fundamentally, political will is a rather top-down concept, relying on the personal conviction of those in power. The will to implement the SDGs – or any other political goals – is not automatically transferred when the reins of power change hands. Political will seems important, then, but not sufficient. It is accountability that we should be cementing as we move into the implementation period of the SDGs.

Cementing accountability
To reach the poorest communities, the SDGs must gain traction in influencing developing-country budgets and policies. This will require a certain amount of peer pressure. Already in New York, some ‘vanguard’ governments (Colombia, Gabon, Indonesia) were talking about internalising the SDGs in domestic processes. They could be effective sources of pressure on their neighbours and others to follow suit. The role of the UN is to ask what peer-to-peer recognition or accountability moments could be created to reward progress and censure laggards.

The national media is always a good source of internal pressure on decision-makers. In which case the most helpful thing for the architects of the implementation process to ask is what sort of data or mechanisms could make SDG delivery a ‘story’. Following the lives of children born in 2015, for instance, might add a human face to the project. At a minimum we need comparable and tangible data across countries, allowing the media to compare results between nations (the way we in the UK are always told our children fall behind in maths compared to Korean or Chinese students).

Civil society is going to be crucial in accountability, and will have a greater tolerance than the press for championing the less popular or media-friendly of the SDGs. But civil society is experiencing a closing of its operational space in many countries. The UN Secretary-General should clearly and unequivocally state that civil-society participation is an integral part of delivery.

Accountability in the UK
The SDGs are universal. They require rich countries to develop, or grow, differently too. In the UK this means not just aligning the work of the Department for International Development (DFID) with the SDGs, but also implementing the goals for the UK public, and ensuring that UK policy beyond DFID has a positive global impact – across trade, tax, climate change and defence, for instance. That the SDGs themselves are still largely seen as being ‘for poor countries’ doesn’t help if they are to be used to hold a wider set of Whitehall departments to account.

Leadership from the top will be important; the Prime Minister was a great champion of the SDGs process and should ensure the drafting of a holistic sustainable development strategy for the UK. Domestically, political traction could depend on whether UK poverty groups take up the SDGs as a tool, or on whether processes within the UK Parliament (and national governments, since sustainable development is a devolved issue) can be established to scrutinise such a strategy as a whole.

Effective pressure is also likely to come from poor-country governments themselves. A universal set of goals provides a tool for their efforts to hold rich industrialised countries to account on issues of global economic justice such as tax.

Influencing the private sector
At the UN summit there was a great deal of celebrating and encouraging further involvement of the private sector. This section of the economy has always had a role to play in development, but the willingness from some companies to be part of an agreed framework is welcome.

The first step in delivery will be to help companies gain a good understanding of the impact of their operations on the lives of people living in poverty. Oxfam has worked with the UN Global Compact to develop and launch an enhanced version of our poverty footprint methodology as a tool to help companies align their work with the SDGs.

Second is the importance of leadership. There were some clear champions of the SDG process in New York – Paul Polman of Unilever, for instance – and their leadership in reporting and assessing themselves against SDG outcomes could be exemplary, as well as serving to demonstrate the benefits to core business.

And third, there is perhaps scope to translate the SDG outcomes into the language of risk, which may work to influence corporate behaviour or the behaviour of investors.

Cash-strapped governments are understandably keen to attract more private-sector involvement and finance in development. By the end of 2015, the amount of aid flowing into the private sector is expected to exceed $100 billion, equivalent to almost two thirds of overseas development aid. Governments spending this money have a responsibility to ensure that such projects are well designed, with clear poverty-reduction objectives shared by all parties, transparency and the involvement of local people.

Finding the cash
Finally, no amount of reporting or accountability will see the SDGs succeed if the trillion-dollar question of who will foot the bill is not addressed. The UK remains commendably stalwart in delivering its aid promise, but other donors are cutting back. As we saw in the Financing for Development Conference in Addis Ababa, there is little appetite among rich countries to address the structural reforms, such as a truly inclusive process of tax reform to benefit rich and poor countries alike, that are needed to underpin a new set of goals.

The SDGs provide the scale of ambition we need to see for a much better world for all. Political appetite to make them succeed is a necessary starting point, but Addis showed us that good will can crumble at the first serious hurdle. We need to do all we can to create alternative pressures and accountability moments on governments, companies and other actors.

This will be no linear, project-management style process of delivery. As my colleague Winnie Byanyima said in her address to the UN, the path to the end of poverty must be tangible, political and disruptive. The real work starts now.