Over a decade of diplomacy has culminated in the creation of the world’s largest marine protected area, the Ross Sea region MPA, protecting 600,000 sq miles of the Southern Ocean from commercial fishing for 35 years 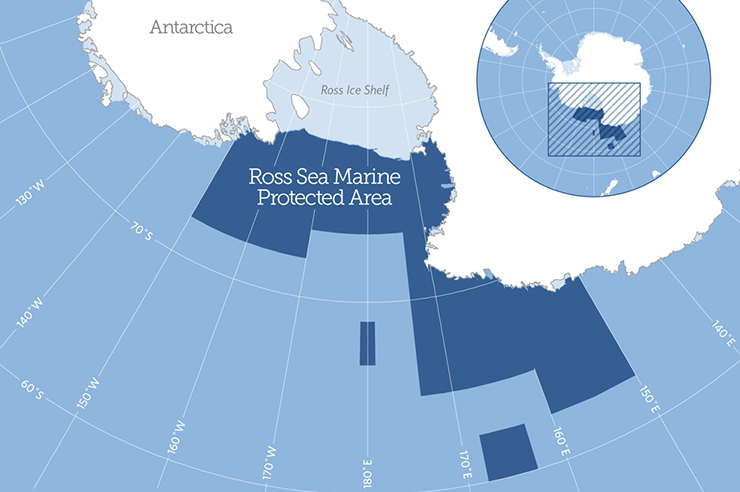 Over a decade of diplomacy has culminated in the creation of the world’s largest marine protected area, the Ross Sea region MPA, protecting 600,000 sq miles of the Southern Ocean from commercial fishing for 35 years

The adoption of the Ross Sea region Marine Protected Area (MPA) by the Commission for the Conservation of Antarctic Marine Living Resources (CCAMLR) in October 2016 was the culmination of sustained scientific and diplomatic effort led by the US and New Zealand. Work began in 2004 when CCAMLR asked its Scientific Committee to prioritise the work required to establish a representative system of MPAs.

In 2005, the Scientific Committee advised the Commission that MPAs may have a number of functions including:

A bio-regionalisation workshop in 2006 identified 11 bioregions in the Convention Area (an area south of the Antarctic Convergence, considered the boundary of the Antarctic region) that demonstrated heterogeneity in the Antarctic marine ecosystems. These regions were considered appropriate for developing MPAs, and for the next two years received priority attention.

To provide a general framework to support this work, on the basis of a proposal by Australia in 2010, CCAMLR began to consider an overarching conservation measure to facilitate the designation of MPAs. It adopted this measure in 2011.

Also that year, CCAMLR refined the mechanism supporting the planning and development of MPAs by defining nine large-scale ‘planning domains’. These both encompassed all 11 bioregions as well as the entire Convention Area. The planning domains were intended to reflect the scale and location of ongoing research, as well as provide logical reporting and auditing units.

Initially, the US and New Zealand submitted separate proposals for an MPA in the Ross Sea region, but these were subsequently amalgamated into a single proposal. A separate proposal for East Antarctica – with Australia, the EU and France as proponents – was also developed. Ultimately, in 2011, the Scientific Committee advised the Commission that the MPA proposals for the Ross Sea region and East Antarctica were based on the “best available science”.

The challenges experienced during the sustained negotiations of the 1.55 million sq km Ross Sea region MPA were wide-ranging and substantive. Russia maintained reservations in respect of key features of both the Ross Sea region and East Antarctica proposals.

These included: the available evidence that the ecosystems are threatened; the size of the areas proposed for protection; responsibilities for research and monitoring; review periods and mechanisms; the durations of the proposed MPAs; and the impacts of establishing MPAs on existing fishing operations.

Until 2015, these concerns were supported to varying degrees by China, the Republic of Korea, Japan, Ukraine and Norway. Support was secured from the majority of these members at the 2015 annual meeting. That meeting also endorsed the addition of a krill research zone to the proposed MPA.

At CCAMLR’s annual meeting in 2016, all members, including Russia, agreed that the proposal should have a fixed duration, and that areas previously closed to fishing in the Ross Sea region outside of the proposed MPA be opened. As a consequence, approximately 72 per cent of the Ross Sea region MPA, in the general protection zone, is closed entirely to commercial fishing. The krill research zone – an area where no krill fishing has occurred since 1992 – covers 322,000 sq km of the MPA. The current total allowable catch for the Ross Sea toothfish fishery is 2,870 tonnes.

A special research zone of almost 110,000 sq km within the MPA is reserved for research associated with toothfish, where there is an allocation of 15 per cent of the total catch set for the Ross Sea toothfish fishery. The allocation of fishing effort in areas outside the MPA will be the subject of a three-year research effort to accumulate data from new fishing areas. This means that future effort will be distributed in a precautionary manner – a decision scheduled for CCAMLR’s annual discussion in 2020.

The MPA will come into force on 1 December 2017 and be in place for at least 35 years. Mechanisms are in place for substantive periodic reviews, supported by research and monitoring plans that will be developed during 2017.

The adoption of the Ross Sea region MPA will also serve as a significant reference for ongoing discussions at the UN in relation to sustainable fisheries, oceans and the law of the sea. It will also help in current negotiations relating to the conservation and sustainable use of marine biodiversity in areas beyond national jurisdiction.