Carbon dioxide (CO2), nitrogen oxides and other emissions fell by 10–30 per cent globally between February and June during the lockdown, and the health benefits were immediate 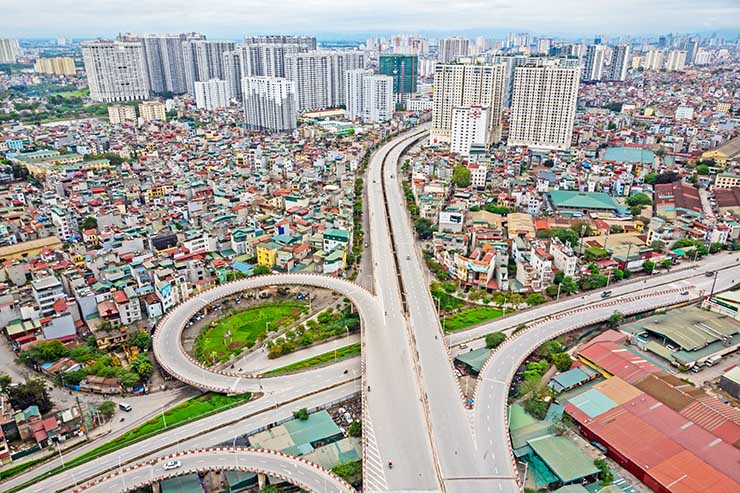 Hanoi, Vietnam pictured in April, with the roads virtually free of traffic. Globally, in April, daily CO2 emissions were down 17 per cent year-on-year. © Linh Pham/Getty Images

Carbon dioxide (CO2), nitrogen oxides and other emissions fell by 10–30 per cent globally between February and June during the lockdown, and the health benefits were immediate

To illustrate the argument made by Enyseh Teimory in her article Interconnected goals, we asked members of UNA-UK staff to explore case studies in the connectivity between various of the SDGs. Here Ben Donaldson explores the interlinkages between health (SDG 3) and climate (SDG 13).

During the first month of lockdown, a study from the Centre for Research on Energy and Clean Air estimated that there were 11,000 fewer deaths in Europe as a result of reduced industrial and vehicular emissions. The study also showed 1.3 million fewer days of work absence, 6,000 fewer children developing asthma and 6,00 fewer preterm births in the same period.

According to the London Air Quality Network, reduced air pollution from road traffic led to a 55 per cent reduction in nitrogen dioxide levels in the UK’s capital. And a survey by the British Lung Foundation found that one in six people with chronic lung conditions had experienced improvements in their lung health during lockdown. In children it was even higher (one in five), and for asthmatics it was one in four.

Other benefits are harder to quantify. Across previously smog-ridden cities, clear, blue skies prevailed. Residents of Jalandhar in Punjab could see the Dhauladhar mountain range for the first time in years. As road traffic evaporated, we breathed more freely. People turned to walking and biking to move safely through previously congested streets. Bike use boomed across the world, in many cases incentivised by improved infrastructure such as in Europe where, according to the European Cyclists’ Federation, by July more than 2,000 km of new cycle lane and 2,700 individual infrastructural measures from almost 400 cities and communities had been announced. As well as benefits around fitness and reducing obesity, active travel replaces polluting journeys, in turn further improving air quality and incentivising yet more active travel.

Air pollution is also marked by environmental injustice. The worst air pollution is found in the most deprived neighbourhoods, where individuals are least likely to own a car. Reduced emissions and active transport will help relieve harm, which disproportionately affects marginalised groups, contributing to SDG 10 (reducing inequality).

Incentivising change
But the positive knock-on effects of lockdown could be short-lived. CO2 levels and vehicle use have bounced back rapidly as restrictions have been lifted. Public transport is being shunned and, in many cases, temporary cycling incentives have dried up. Hard-and-fast action by governments and city authorities is essential to bank the improvements that have been glimpsed and to incentivise sustained behavioural change.

Stopping subsidies for fossil fuels, expanding green energy and redesigning cities to make it easier to make healthy choices will help us capitalise on the lessons of this pandemic and make essential progress towards the SDGs and the Paris Climate Agreement.