Can tax regimes underpin the SDGs?

Generating the investment needed to realise the goals will rely less on traditional aid and more on countries’ own ability to raise and utilise funds through their tax systems.  For those with weaker or less developed tax regimes, this will prove a significant challenge 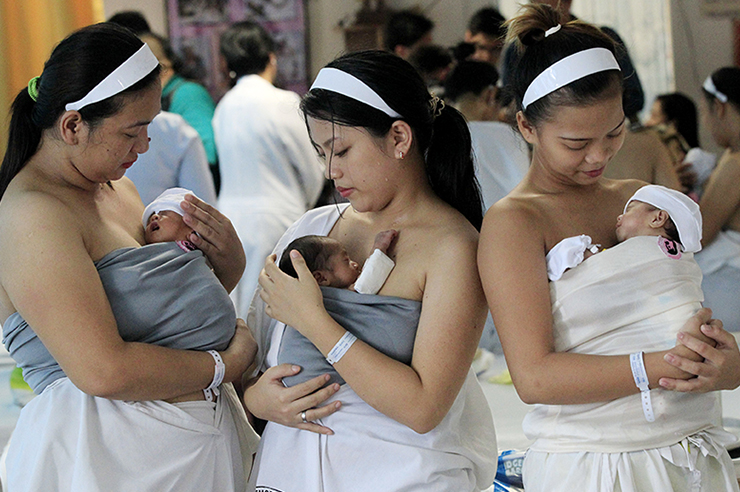 Mothers with their newborn babies in Manila. The Philippines demonstrated how tax and tax morale can be raised: almost 80 per cent of additional revenues from its reformed excise tax on alcohol and tobacco go towards funding the country’s Universal Health Care programme  © Reuters/Romeo Ranoco

Can tax regimes underpin the SDGs?

Generating the investment needed to realise the goals will rely less on traditional aid and more on countries’ own ability to raise and utilise funds through their tax systems.  For those with weaker or less developed tax regimes, this will prove a significant challenge

It is clear that one of the major challenges of implementing the new, universal Sustainable Development Goals (SDGs) is financing. The broad scope and responsibility of the 2030 Agenda calls on all nations and societies to do their part.

And while development cooperation in the past was framed around terms like ‘donor’ and ‘recipient’, today it is increasingly clear that countries’ own resources are fundamental to finance the SDGs – and to make development sustainable. Domestic revenues provide governments with independent resources for investing in development, delivering public services, and increasing state  capacity, accountability and responsiveness to their citizens.

These flows are not negligible. Developing countries’ domestic resources provide by far the largest share of financing for development, even in the poorest countries. In 2012, total tax revenues collected in Africa were 10 times greater than what countries received in the form of official development assistance (ODA).

Yet the potential is much greater. While Organisation for Economic Co-operation and Development (OECD) countries collect on average 34 per cent of their GDP as tax, developing countries achieve only half of this on average. Estimates suggest that ‘tax effort’ – the ratio of actual revenues to potential – is not low in all developing countries, but they also show that significant additional revenue could be raised in those countries where performance is weakest.

What’s holding things back? Many countries have limited capacity in their tax administrations and often tax avoidance and evasion are rampant. In July 2015, participants in the Third International Conference on Financing for Development, held in Addis Ababa, highlighted the importance of scaling up international support to developing countries to help them overcome these two hurdles. They launched the Addis Tax Initiative, committing to double official development spending on tax matters by 2020.

At the same time, the OECD and UN Development Programme launched ‘Tax Inspectors Without Borders’, a programme designed – using a ‘learning-by-doing’ approach – to scale up the capacity of developing-country tax administrations to select and perform tax audits.

Cooperation and transparency
Developing countries face exacting policy choices and trade-offs when looking to increase their tax collection and to encourage investment and growth at the same time. A recent report to the G20, compiled by the International Monetary Fund, World Bank, UN and OECD and entitled Options for Low Income Countries’ Effective and Efficient Use of Tax Incentives for Investment, highlights the tension between using incentives, like tax holidays, to create an investment-friendly tax regime and securing the necessary revenues for public spending.

Wasteful tax incentives can lead to inefficient allocation of productive resources and actually depress economic growth. According to the report, the loss of potential tax revenue due to tax incentives across 15 Latin American countries ranges from 0.4 per cent to 5.8 per cent of GDP and there are questions about the investment gains.

At the same time, increasing tax revenues is not only a question of capacity and incentives. Loopholes in the international rules that allow corporate profits to ‘disappear’ or be artificially shifted to low- or no-tax environments are major threats to domestic resource mobilisation. Rwanda and Nigeria report that 70 per cent and 88 per cent, respectively, of their tax base comes from multinational enterprises, while in Burundi, just one company contributes nearly a fifth of all taxes collected.

The endorsement of the OECD/G20 Base Erosion and Profit Shifting (BEPS) Project in November 2015 marks a milestone in an era of unprecedented international tax cooperation. The BEPS Project helps governments close the gaps in international tax rules through a comprehensive, coherent and coordinated reform effort.

To shore up the global fight against tax evasion, last year over 90 members of the Global Forum on Transparency and Exchange of Information for Tax Purposes committed to begin to exchange financial information automatically, which will further strengthen international cooperation and significantly increase tax transparency.

Another area of particular concern for developing countries is the ‘natural resource curse’. Many resource-rich countries rightfully see their resources as a path to improved wellbeing for their citizens. Yet too often, these countries can find their ambitions plagued by corruption, volatility of revenues and poor economic growth in other areas.

For this reason, resource-rich countries need to design and implement fiscal regimes that not only satisfy domestic policy objectives, but also are able to weather the inevitable storms created by economic forces put in motion elsewhere, including industrial trends, corporate investment decisions, geopolitics and tax avoidance.

Building trust
At the domestic level, building trust is essential to putting in place solid tax regimes. Specific challenges that loom especially large in developing countries include low taxpayer morale, corruption and the missing reciprocal link between tax and public and social expenditures. These challenges present huge obstacles to realising the potential of domestic resources for financing sustainable development.

The vicious circle of low tax morale and compliance – which reduces the lifeblood for funding public services – needs to be broken. For this, regimes need to be not only transparent, but also capable of using public revenue in a way that reasonably satisfies local notions of fair and sound investment. For societies still building their democratic and governance institutions, this is an exceptionally tall order. Strengthening the links between revenue and expenditure can help them to foster a virtuous cycle of increasing accountability, trust, tax morale and, ultimately, tax revenues.

The Philippines offers a practical illustration. The country not only successfully reformed the excise tax on alcohol and tobacco, popularly known as the ‘sin tax reform’, it earmarked close to 80 per cent of the total incremental revenues from this reform to finance the national Universal Health Care programme.

To ensure that policy measures are responsive to the evolving needs of the country and its economy, good comparative data and revenue statistics are essential. The OECD’s annual Revenue Statistics report provides a framework to define which government receipts should be regarded as taxes.1 It presents a unique set of detailed and internationally comparable tax data in a common format for all OECD countries, and includes an increasingly large number of developing countries. This responds directly to the challenge of monitoring progress on mobilising domestic resources as set out in SDG 17.1.

These examples illustrate some of the challenges to – and opportunities for – progress on more and better tax collection. Yet the question remains: can countries use their tax revenues, aid, investment and remittances to meet the SDGs by 2030? While better tax systems are essential, they are not a panacea. Equally important is how this revenue is being spent and distributed, to ensure equity, promote inclusiveness and effectively address social needs – all pillars of the SDGs.

Inequality is now established as an issue of global concern. Within the SDGs it is to be addressed through achievement of a range of targets that includes growth in income of the poorest 40% of the world’s population.

Deregulation and the consequent increase in the scale of corporate tax avoidance have occurred in tandem with a widening gap between rich and poor. The two trends are closely connected. The ease with which multinational companies now side-step their tax liabilities has resulted in ordinary citizens bearing a greater proportion of the costs of government. In the period 1950-2010, the percentage of US federal government revenue from corporate tax reduced from around 30% to less than 10%.

Many tax-avoiding companies embrace a corporate social responsibility (CSR) agenda: typically taking steps to uphold human rights and promote environmental sustainability. Paying tax is rarely viewed as a CSR issue – a fact that illustrates the impact of powerful interests upon the deployment of language. While all countries are adversely affected by corporate tax avoidance, countries in the global South are especially disadvantaged. Many multinationals not only avoid paying tax to developing country governments but also extract special privileges, such as tax holidays, with the promise of investment. Moreover, by minimising their tax payments in the global North they squeeze national budgets: making it hard, politically and financially, to maintain spending on overseas aid.

PR gains
Despite undermining governments in the global South through tax avoidance, many multinational corporations are eager to fund INGOs and UN agencies involved in international development. The funding they provide is not usually large – certainly a fraction of the tax they would pay were loopholes eliminated. Yet for their money they gain considerably in PR terms through association with efforts to improve the lives of the poor. Little wonder that development agencies focused explicitly on children have been particular recipients of corporate largesse.

Curtailing tax avoidance requires global action on regulation. Also vital will be the building of popular pressure and norm setting. Expanding the notion of CSR so that proper payment is deemed foundational to the exercise of corporate responsibility is one aspect of this effort. Civil society organisations have a valuable role to play in advocacy and in mobilising public opinion. Organisations such as UNICEF and Save the Children, which currently ‘partner’ with some of the world’s largest tax avoiding corporations, have so far not taken up this role. However, as the connection between corporate tax avoidance, inequality and developmental failure becomes more apparent, the risks of reputational damage to such agencies can only increase.