The growth of urbanisation has created stark inequalities around the world. Through more intelligent design and use of urban spaces, can we move towards a situation where cities  provide safe, prosperous and enjoyable places to live for all their inhabitants? 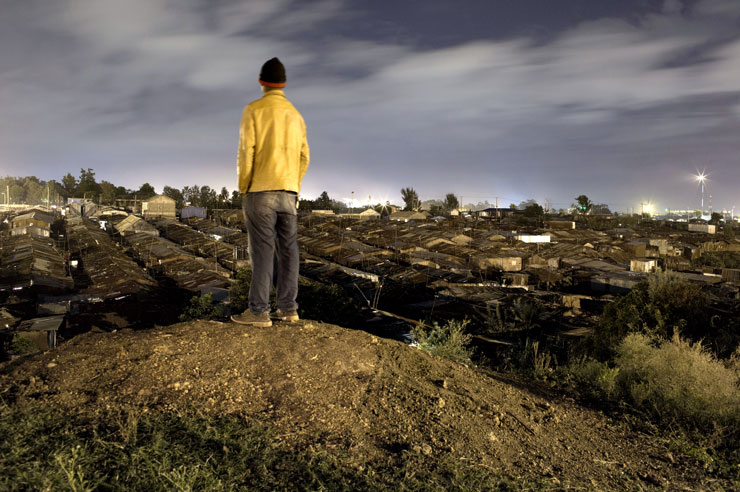 The growth of urbanisation has created stark inequalities around the world. Through more intelligent design and use of urban spaces, can we move towards a situation where cities  provide safe, prosperous and enjoyable places to live for all their inhabitants?

In 1950, the fishing village of Shenzhen in south-east China had 3,148 inhabitants. By 2025, the UN predicts this figure will reach over 15 million. The Democratic Republic of the Congo’s capital, Kinshasa, will have gone from 200,000 to over 16 million, growing over the next decade at the vertiginous rate of six per cent each year (about 50 people per hour). Meanwhile Brazil’s economic engine, São Paulo, will have slowed to the rate of 1.2 per cent per annum, nonetheless experiencing a ten-fold expansion over the 75-year period.

In 2015, London overtook its historical high of 8.6 million reached at the outset of World War II, bucking the trend of many European and North American cities that have experienced only slight or even negative growth. Compared to other global cities, London is inching forward with only nine new residents per hour, compared to double that number in São Paulo and more than 70 in Delhi, Kinshasa and Dhaka. Nonetheless, London will accommodate one million more people by 2030. These snapshots reflect deep differences in patterns of urban growth and change across the globe, often masked by the crude statistic that the world is now more urban than rural and that we are heading towards the 70 per cent urbanisation threshold by 2050.

Historically, urbanisation has always been closely linked to economic development. While growth in the mature cities of Europe and North America accelerated in the 19th century, most reached their peak by mid-20th century. Other regions of the world saw their cities grow most significantly from the 1950s onwards. Tokyo grew by more than half a million inhabitants each year between 1950 and 1990, Mexico City and São Paulo by more than 300,000 each per year and Mumbai by around 240,000 per year.

The only exceptions in this period were cities in China and sub-Saharan Africa, which experienced modest growth. But from the 1990s onwards – with the impact of globalisation and opening up of the Chinese economy – cities continued to grow rapidly in south and south-east Asia, with China experiencing a sustained growth spurt that is palpable today. For example, the south Guangdong metropolitan area (which includes Shenzhen, Guangzhou and Dongguan) saw its 5.5 million inhabitants in 1990 increase six-fold to reach almost 32 million in just two decades.

The result of this process of growth and change is an uneven distribution of urbanisation across the globe. Europe, South and North America are the most urbanised of the five continents with 73, 83 and 82 per cent of people respectively living in cities, towns and other urban settlements. Africa stands at around 40 per cent and Asia at 48 per cent, and both regions are set to experience exponential growth in the coming decades – a combined effect of increased birth rate and migration.

Patterns of growth
There are stark differences in patterns of urban growth across the globe. Most large cities in Europe and parts of North America hit their current size by 1950. Latin America, the west coast of the US, Japan and some Asian cities grew substantially in the years leading to 1990. But the bulk of urban growth between now and 2030 will be experienced in sub-Saharan Africa, India and China and other Asian cities like Dhaka and Manila, while Tokyo will experience relatively modest growth over the same period. 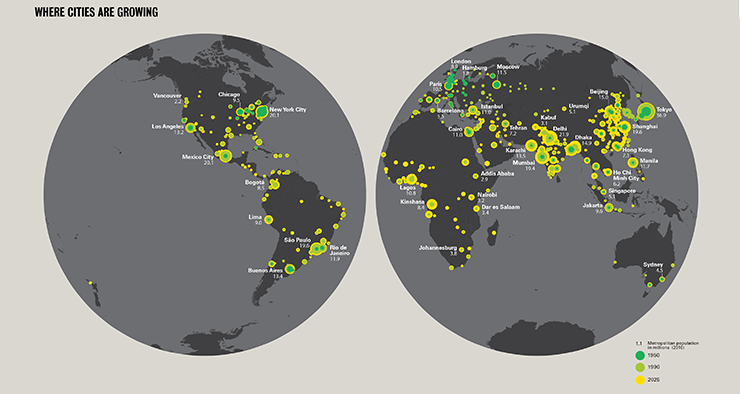 There are equally stark differences in the distribution of inequality. While all cities display some level of inequality, some have more pronounced disparities than others, depending on their national and regional contexts, and the levels of economic development and informalisation, i.e. informal forms of employment.

What we are observing today – especially in cities in the developing world – is that social inequality is becoming increasingly spatialised. In her observations about inequality in São Paulo, the anthropologist Teresa Caldeira, Professor of City and Regional Planning at the University of California, Berkeley, has described a dual process of confrontation and separation of social extremes. The former is captured by the powerful image of the water-deprived favela of Paraisópolis in São Paulo, overlooked by the expensive residential towers of Morumbi with swimming pools on each balcony.

Caldeira defines the latter as a form of urbanisation that “…contrasts a rich and well-equipped centre with a poor and precarious periphery… the city is made not only of opposed social and spatial worlds but also of clear distances between them. Since these imaginaries are contradictory – one pointing to the obscene neighbouring of poverty and wealth and another to a great distance between them – can both represent the city?”1 Designers, developers, investors and policymakers are faced with increasingly tough choices as to how to intervene within changing urban physical and social landscapes.

How do you maintain the DNA of the city when it undergoes profound transformations? Who is the city for? How do you reconcile public and private interests? Who pays and who gains? The city planners of London, Paris, Barcelona, Hamburg and New York are grappling with the same questions as the urban leaders of African, Latin American and Asian cities, even though the levels of deprivation and requirements for social infrastructure are of a different order of magnitude.

Many urban projects of the last decades have contributed to a physical reinforcement of inequality. Gated communities and enclaves proliferate. They cast differences in stone or concrete – not for a few undesirable outcasts, but for generations of new urban dwellers who continue to flock to the city in search of jobs and opportunities.

The key question for urban designers and policymakers alike is what role, if any, does the design of the physical environment play in exacerbating or alleviating inequality? Should we, as Suketu Mehta, author of Maximum City: Bombay Lost and Found, has recently asked, design cities that are fully inclusive? Or should we settle for urban neighbourhoods that at least don’t exclude anybody?2

In many African and Latin American cities, inequality is a stark reality. For example, despite recent improvements, Rio de Janeiro and São Paulo still top the Gini index charts, which measure the differences between the more affluent and more deprived members of society. Inequality in these cities is nearly twice that of London or Berlin, even though it remains less extreme than in some African cities like Johannesburg or Lagos, or in other Latin American cities like Mexico City, Santiago or the highly planned Brazilian capital of Brasília.3

London, for example, has average income levels four times higher than Rio. Yet, the UK capital has a marked intra-urban distribution of inequality. The most deprived neighbourhoods are concentrated in the east and south, with more affluent residents concentrated in west London and the periphery of the city (the suburbs on the edge of the green belt). In Paris, by contrast, social deprivation is concentrated on the edges of the city, with poorly serviced, predominantly migrant communities living in 1970s block typologies in the banlieues beyond the Périphérique.

Few European cities display the clear-cut racial and spatial segregation of so many US cities like Chicago, St Louis and Los Angeles. However, they are equally exposed to what the sociologist William Julius Wilson has characterised as physical “islands”, which breed an inward-looking mentality where speculation about others takes the place of contact-based evidence.

The trend towards greater physical separation of distinct socio-economic groups is being implemented across the urban landscape of many cities, especially in those experiencing very rapid forms of informal growth.

In this respect, architecture and urban design play an important role in laying the ground for potential integration rather than creating environments that are intentionally exclusive.

Mitigating impacts
Ultimately, the urban question revolves around issues of inclusion and exclusion. For Suketu Mehta, what matters is “not that everyone is included. It’s that no one is excluded. It’s not that you’ll get invited to every party on the beach. It’s that somewhere on the beach, there’s a party you can go to.”4

The spatial dimension in this equation is critical. It is the loss of porosity and complexity that Richard Sennett has identified as the critical characteristic of contemporary urban malaise. In his words: “I don’t believe in design determinism, but I do believe that the physical environment should nurture the complexity of identity. That’s an abstract way to say that we know how to make the Porous City; the time has come to make it.”5

The reality of the urban condition reveals that in many parts of the world, urbanisation has become more spatially fragmented, less environmentally responsive and more socially divisive.6 Adaptable and porous urban design, coupled with social mix and density, will not solve social inequality on its own. But they will go a long way in mitigating the negative impacts of exclusionary design and planning.

By developing a more open form of urbanism that recognises how the spatial and the social are inextricably linked, perhaps we will be proved right that cities can help provide solutions and not just exacerbate problems.