The protests sparked by the death of George Floyd have shone a light on the human rights abuses still rife in even the most developed economies. In this Decade of Action, can we finally end racial inequality? 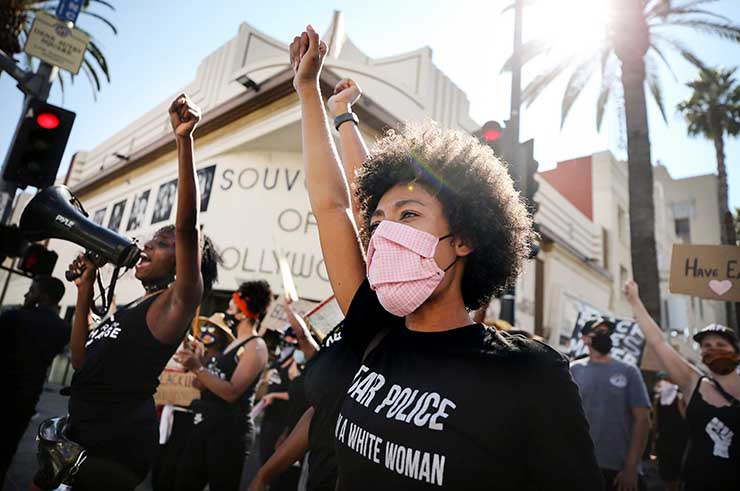 The protests sparked by the death of George Floyd have shone a light on the human rights abuses still rife in even the most developed economies. In this Decade of Action, can we finally end racial inequality?

“All human beings are born free and equal in dignity and rights.” “Everyone has the right to life, liberty and security of person.” “No one shall be subjected to torture or to cruel, inhuman or degrading treatment or punishment.”

These are just three articles of the Universal Declaration of Human Rights (UDHR), adopted by the United Nations in 1948.

Yet, more than seven decades later, the United States of America, which played a leading role in the drafting of that milestone document, finds itself at the crossroads of a human rights crisis. Protestors have taken to the streets to demand equal dignity, rights, freedom, justice and peace for Black Americans, spurred by one too many senseless murders.

The names of Breonna Taylor, George Floyd, Mike Brown and others are now etched in the annals of a long, complex, hard-fought battle to fulfil the promise of the UDHR to all people around the world – no less African Americans.

A Sustainable Development Agenda for all?
In addition to being a key figure in the process that gave us the Declaration of Human Rights, the US was also signatory to the 2030 Sustainable Development Agenda – “a plan of action for people, planet and prosperity”. Adopted in 2015, it also holds a promise of ensuring that people, wherever they are in the world, can fulfil their potential with dignity, equality and in a healthy environment.

So why are Black Americans, citizens of one of the wealthiest nations on Earth, yet to realise this promise? Certainly, the 2030 Agenda for Sustainable Development is not only for the Global South. And surely a country that historically has been at the forefront of the human rights agenda should be able to fix matters of equality and justice at home before attempting to do it abroad?

We wish it were true. We wish there were no need for a Black Lives Matter movement. But, sadly, there is. In 2020, after five centuries of struggle, the fight goes on. The time has come, however, when the gross violation of equal rights for people of colour in the US can no longer be ignored. It has never been clearer: human rights are not just a foreign problem for the US. It is also a domestic problem. It is why new movements and voices, new advocates supported by new allies have emerged, affirming the humanity of Black people and rejecting ‘narrow nationalism’ – as the Black Lives Matter movement calls it.

With sparks of an unrelenting uprising of international solidarity for equal rights for Black Americans igniting global conversations and agitation for an end to systemic and systematic oppression, the international community has to make new choices and new statements.

In many ways, her statement affirmed a key fact that needed to be laid bare: the 2030 Sustainable Development Agenda is not just for people in underdeveloped countries. This agenda is needed to address the unique challenges Black Americans face that too often have been forgotten and overlooked. It is time for their struggles, their needs and their human rights to be front and centre.

Bridging the gap between the Global Goals and Black Lives Matter
The question is: where do we go from here? What will it take to create lasting change and fulfil the promise of the Global Goals and the UDHR for Black America? A series of events and actions within the global development community are signals of hope.

The UN Human Rights Council in Geneva set up an urgent debate on racism, alleged police brutality and violence against protestors. UN Deputy Secretary-General Amina J. Mohammed said: “This cause is at the heart of our organisation’s identity. Equal rights are enshrined in our founding Charter. Just as we fought apartheid years ago, so must we fight the hatred, oppression and humiliation today.” The Council also heard from the brother of George Floyd. “I am asking you to help us: Black people in America,” he told the Council.

In addition, African leaders in the UN who hold the rank of Under Secretary-General penned a poignant op-ed as the US witnessed a summer of protests, declaring: “To merely condemn expressions and acts of racism is not enough. We must go beyond and do more.”

Further, several institutions and think tanks have started the hard work of examining and fixing the colonial approach to development, where the fight against ‘global poverty’ ignores the ongoing scourge in the Global North, where decisions are made for – rather than by or with – those in the Global South, and where the lack of diversity and inclusion within these institutions needs to be addressed for true progress to be realised.

The United Nations Association of the United States of America (UNA-USA) is also doubling down on its human rights work. This movement of Americans that supports the UN’s mission and the Sustainable Development Agenda is a long-time steward of the UDHR. But today that work is accelerated and more essential than ever.

The call for members to say something and do something has never been more urgent. Over the past few months, UNA-USA has been bringing together activists and advocates to use their voices, stories, ballots and liberties to call out injustice whenever they see it throughout the world – and across America in particular.

Hope for the journey ahead
The work has begun but it is far from over. The conversations and meetings now need to evolve into sustained agitation and action until there is lasting change. The global development community – at the highest levels – must tackle the issue head-on. The Black Lives Matter movement has made remarkable promise in just seven short years, but it needs multilateral action if the disruption it began in 2013 is to be fruitful.

The work to dismantle more than 500 years of injustice and oppression will be hard and complex. It will demand new ways of thinking, new voices, new actors and, in some cases, new leadership. But the unprecedented momentum across communities, countries and people of all races for the full equality and dignity of the Black American should inspire hope.

We cannot rest until the day comes when we will not need debates or protests to fight for freedom and equality in dignity and rights for Black people in America. Black boys and girls – from sea to shining sea – should not have to watch the world fighting for their right to life, liberty and security of person. And Black parents should be able to rest at night knowing that their sons and daughters will not be subjected to torture or to cruel, inhuman or degrading treatment or punishment in their homes or while on a trip to the store.

We should all be optimists and activists, determined to see the promise of the UDHR and the Sustainable Development Goals fulfilled for Black Americans in this generation.