Protecting biodiversity is not just about ethics. Prosperity depends on healthy, sustainable biosystems 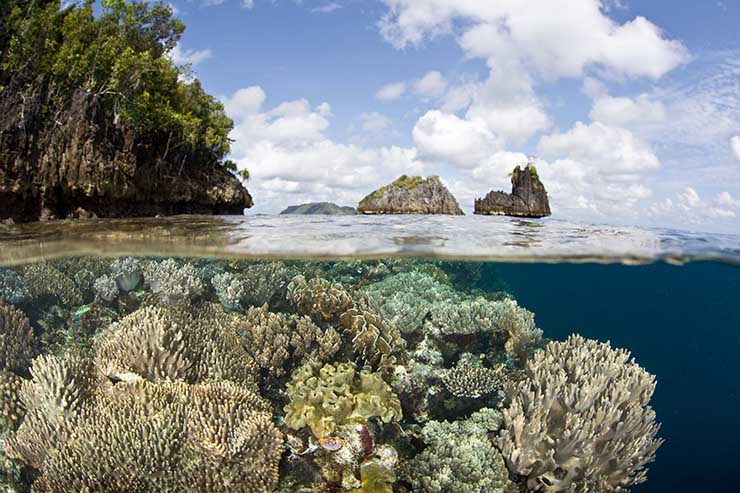 The island of Misool in West Papua, Indonesia, is one of the richest locations on the planet for biodiversity and, as with other Pacific islands, faces severe risks from climate change and extreme weather. © WaterFrame/Alamy Stock Photo

Protecting biodiversity is not just about ethics. Prosperity depends on healthy, sustainable biosystems

I am proud to be a sack of ocean water walking on land. After all, life started to evolve in our planet’s oceans. Some life forms bagged up that water, added legs, and started to live on land. We, people, are descendants of these adventurous creatures.

Our body contains physical memories of early evolution: it uses electrolytes and still takes advantage of membranes to regulate the exchange of nutrients and filter out waste. Some people think that other planets necessarily are our next frontier. But they may forget that we, humans, are part of Earth, that our physiology reflects the very conditions that enabled life to emerge on this unique celestial body. Even our legs and the speed at which they swing evolved as a function of the particular gravitational force we experience on the surface of our planet. We are parts of the biosphere.

One biology
In short, we are biology. COVID-19 has powerfully reminded us of that fact – that we are indeed one biology. Our genetic codes are so profoundly related that the coronavirus can interact with all of us, wherever we live on this planet. The biosphere is our home and our host.

Being biology, of course, we depend on biodiversity. Even though we often consider ourselves as one, separate species, scientists have found over 10,000 species of mostly friendly microbes living in and on our bodies, collectively containing more than 300 times the number of human genes. In other words, even bodies are biodiversity.

The implications of being biology are profoundly practical. In short: biodiversity means self-preservation. Looking at the world from the biological vantage point makes any company, city or country’s economic self-interest clear and obvious. The biological view recognises the flows of energy from ecosystems to animals, including people. Such flows come in the form of food, fibres, and other services. This view also makes obvious the importance of ecosystems to cope with our waste and to turn it back into resources.

The inescapable conclusion is that if we do not have a healthy life-support system, we put ourselves at risk. The lack of resource security undermines the ability of each and every underprepared country, city or company to operate.

It is no longer a secret that the human species is eroding its life-giving planet. Some scientists are calling our era the anthropocene: people have become the dominant geophysical force on the planet. In fact, the overuse becomes particularly evident once we analyse the planet as if it were a farm – because it is one. We can draw up a basic biological balance sheet and compare our demand on the planet with what our farm is able to renew. This is what Global Footprint Network’s National Footprint and Biocapacity Accounts do – based on about 15,000 data points from UN statistics, per country and per year.

What these accounts show is that humanity is using the biosphere faster than it can replenish – so fast that this year from 1 January to 22 August, or just 64 per cent of the year, the demand was as large as the total amount that all ecosystems combined can renew in the entire year. That’s why 22 August was this year’s Earth Overshoot Day. This is akin to using the resources of 1.6 Earths. If humanity as a whole lived like the residents of Luxembourg, a high-income country, on average, the date would have been 16 February.

It is possible to use more of nature than is being renewed as long as there are sufficient amounts of resource stocks (like forests, soils and groundwater) that we can deplete, and waste sinks (to absorb greenhouse gases from the atmosphere) that we can fill. But this overshoot does not work forever.

Nor is it ideal to aim for using the entire capacity of Earth for humans alone. The sole occupation of the entire Earth by humans would be a major threat to biodiversity. To maintain 85 per cent of the world’s biodiversity, scientist and naturalist E.O. Wilson recommends that humanity only use half the planet’s biocapacity, which would also be helpful from a climate-change perspective. This means the current human metabolism of 1.6 Earths is more than 3 times larger than the amount available from Wilson’s Half-Earth perspective.

Given this quantitative mismatch, the first step to preserving our ecological integrity is to measure the scale of human presence in the biosphere. This is why Global Footprint Network keeps track of how much people demand relative to what the planet’s or each region’s ecosystems can renew. Even if, ultimately, we want wonderful things like healthy ecosystems and abundant biodiversity, these goals cannot be achieved if the quantities mismatch. If the quantity of human demand exceeds regeneration, we cannot scale goals like healthy ecosystems and abundant biodiversity.

As long as the quantitative bottom-line condition of demanding less than what can be sustainably renewed is not met, quality cannot be scaled. For instance, assume that a forested area is harvested at double the rate at which it can be sustainably renewed. In this context, if we protect a portion of that forested area to preserve biodiversity, we will inevitably also put more pressure on biodiversity in the remaining area as long as human demand is not decreased. The demand just shifts.

In other words, in a situation of overshoot, preserving one area comes at the expense of more pressure on the remaining areas. This means that biodiversity protection, in this example, can only be scaled across the entire forest area, if the basic quantitative condition of harvesting that forest below sustainable renewal rates is met.

This quantitative mismatch drives the loss of biological diversity in terrestrial, marine, and freshwater ecosystems all around the world, and the consequent deterioration of the ecological goods and services. More specifically, the loss of biodiversity is typically the result of one of five direct pressures or threats:

These direct threats to biodiversity arise from indirect drivers, all of which are contributors to ecological overshoot. Our massive overshoot puts many regions’ resource security at risk, particularly if their local demand exceeds what their local ecosystems can renew and they do not have the financial means to procure those extra resources from somewhere else.

Given this massive overuse, with climate change being one of the more prominent and widely discussed threats, the lackadaisical reaction of countries, cities and companies is surprising. To put it bluntly, if we recognise the emergency as a storm, it is mind-boggling to witness how many governments and companies nonsensically argue, “I will only fix my boat if others fix their boat first”.

Yet that’s the predominant narrative in current climate negotiations. This narrative is self-defeating. Because in the absence of international agreements and collaboration, each entity bears even more risk and has an even higher incentive to prepare itself for the predictable future of climate change and resource constraints. As a passenger sitting in a car that’s getting dangerously off course, do you want to sit on the hood, or behind the steering wheel? Choose your future by design – don’t have it chosen by disaster.

Here is how: a biological approach that is comprehensive and recognises human dependence on the planet’s ecosystems enables us to see climate and biodiversity action as necessary rather than noble. The current climate debate is stuck in a noble argument (“it is our responsibility to humanity and the future”), leading to timid action. In reality, a country’s competitiveness and success depend on aggressive efforts to reduce resource dependence.

Countries must prepare themselves for an inevitable carbon-free future, thereby strengthening their own resource security, and also supporting, as a side benefit, humanity’s sustainability.

Closing the gap between human demand and the Earth’s biological regenerative capacity (biocapacity) is necessary for both human long-term thriving as well as for maintaining biodiversity and ecological integrity. Actions and interventions to sustain the livelihoods of human populations and to conserve biodiversity at the same time depend on a two-pronged approach to increasing resource security: (i) reducing resource dependence across the globe and (ii) protecting ecosystems from destruction or degradation.

There is no other path if we want to maintain human prosperity. It is also the only path that ensures biological productivity and diversity are sustained.