Beneficiary engagement in the SDG era

The international community now agrees that successful aid intervention requires the involvement of communities and beneficiaries in the decision-making process. But what should this involvement look like, and how can it be achieved? 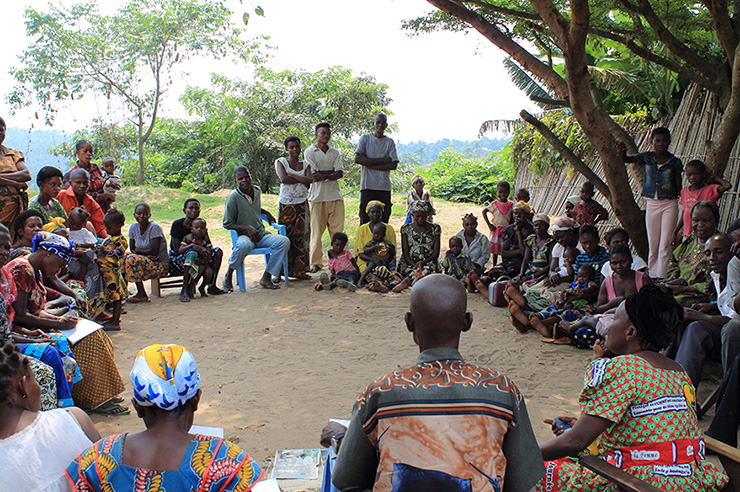 Following an Action Against Hunger initiative, a community group in Masi-Manimba, the Democratic Republic of the Congo, holds weekly meetings to identify ways to tackle malnutrition and support healthy eating
© Department for International Development /Rishma Maini

Beneficiary engagement in the SDG era

The international community now agrees that successful aid intervention requires the involvement of communities and beneficiaries in the decision-making process. But what should this involvement look like, and how can it be achieved?

There are few knowns in international development. While there is no shortage of ‘experts’ giving their firmly-held opinions on any number of important issues, the range of diverse views along with the changing fads and common wisdoms imply that there is little certainty. On one issue, however, there is consensus both in anecdotes from development professionals and in the academic literature: without a significant degree of recipient/beneficiary engagement, development interventions are likely to fail.

This central tenet was at the heart of the Paris agenda on aid effectiveness, which set ownership as the first principle of effective development partnerships.

The fact that this is known by most people in development does not mean, of course, that such engagement is as common as it should be. The incentives that drive so much aid and development cooperation, today and throughout history, mean that doing development well is incredibly hard. Indeed, while the so-called ‘results’ agenda that is now dominant in most donor strategies clearly has some merit – emanating from an understandable desire to account for high-quality expenditure of limited public funds – it is putting significant pressure on this crucial principle.

You only have to listen to the recent speeches of most donor bureaucrats and count the times they emphasise beneficiary engagement and ownership to realise how endangered this idea has now become, quite contrary to the evidence – and somewhat depressingly given its heyday only a few years ago. In this context, it is worth briefly reminding ourselves why engaging the potential beneficiaries of an aid partnership is so important. The logic is fairly simple. History demonstrates again and again how external interventions have had less than positive results, even when carried out with the best intentions. And over time, the aid community has grown to realise that it does not have the answers to the complex problems it wants to help solve.

It is through partnership – the exchange of ideas, the joint building of strategies – that solutions are most likely to emerge. Often beneficiary communities do not have the answers either, and even with full beneficiary engagement, success is far from certain. But it is substantially more likely.

And there is a further intrinsic, as opposed to simply instrumental, reason. Ask aid recipient communities and countries all over the world about their experience of receiving aid and you are likely to get strikingly similar responses, despite vastly different contexts. This was evidenced by a brilliant book by Mary B. Anderson, Dayna Brown and Isabella Jean published in 2012: Time to Listen. Communities tend to appreciate the efforts of foreigners or external actors to help, but they also talk of being alienated from the process, of arrogance, and often of an affront to their dignity. Engaging beneficiaries in aid partnerships is not only the right thing to do because it increases the chance of successful outcomes; beneficiaries also have a right to engage. Their dignity insists upon it.

Gone are the days of “us” and “them”, when hubristic outsiders arrived with preset plans. We are entering the era of the grand collective, of which the universality of the Sustainable Development Goals (SDGs) is one symbol. In fact, the SDG process has thus far been the most participatory in UN history. It is a solid basis on which to now build a default attitude of beneficiary engagement into all development cooperation projects. The simple fact that all countries around the world have been engaged in drawing the SDGs together should not be taken for granted. It was not the case for their predecessors, the Millennium Development Goals, which were largely drawn up by UN bureaucrats building on Organisation for Economic Co-operation and Development drafts. They were a great set of goals but they symbolised a passing era of top-down development.

But just as broad engagement has made the goals comprehensive and owned, the challenges of widespread participation are also abundantly clear from the SDG process. Ask a wide range of people what they think and you will get a wide range of answers. The world swiftly becomes much more complex than a logframer in a donor office would prefer. To tackle the fundamentals of hunger, education, healthcare and sanitation, the SDGs imply that we also need to respond to issues of inequality, industrialisation, consumption and production, and conservation.

And, challengingly, we have only just started. The drafting of high-level, global and therefore necessarily general objectives was the easy bit. The real challenge is now to apply this attitude of engagement right down to the national and local levels in interventions. Is the world of aid ready for what that entails: answers you were not expecting; complicating factors you would prefer not to have to deal with; demands on time and resources?

The push under the Paris agenda to delegate some or all of that responsibility to developing-country governments was bold and in some cases appropriate, but  it has proven hard to sell to sceptical publics and media. The principle of budget support could be equally well applied to recipient civil society organisations as to government ministries. That should remain the aim, but it is hard to achieve in the real world. I would suggest three principles to guide aid partnerships in this new era: engagement should be bottom up, long term and genuine.

It might sound obvious that beneficiary engagement should be bottom up but there are many levels of beneficiary in the aid business, ranging from governments and major non-governmental organisations (and even companies) to, of course, communities themselves. Even in communities there is a hierarchy. Pushier, wealthier, better-educated people are often in a position to ensure their voices are heard, at times above others.

So it is important to be radically bottom up using what I call the ‘lowerarchy of listening’, which means that the people to whom you should listen the most are those who are normally heard the least. If development is about anything it is about rebalancing the norm, upsetting status quos that generally have held for centuries, and encouraging different perspectives to come forward.

Long-term approach
‘Long term’ can mean different things to different people. One person’s long term is another person’s short term. The rise of the audit culture in development is in part a consequence of the failure to engage long term with partners and communities, but budget-checking and box-ticking cannot replace really getting to know someone. That takes time. There is no shortcut. If aid donors and development professionals want to have a meaningful and sustainable impact on the lives of poor communities, they have to do more than turn up – they have to accompany them over the long term.

Finally, suggesting that engagement be genuine might also sound like a truism if it were not that so much of it is not genuine. There is only one true test of the genuineness of listening: the degree of adaptivity of an aid programme. Engaging people but failing to take into account their input is worse than not engaging them in the first place as it undermines trust. But building adaptivity into an aid programme is very difficult, given the increasingly precise stipulations of donors. Planning and strategy-building processes are therefore all the more important. The better the plan, the less adaptation should be required.

Much, if not all, of this is well known to most development professionals, but their ability to put theory into practice depends a great deal on the source of aid money. Donors need to do much better in encouraging bottom-up, long-term and genuine beneficiary engagement, with all the time, money and hassle that might imply.

Engaging beneficiaries does not absolve donors from having to make tough decisions. More often than not there will be divergent opinions about the best courses of action, and it will ultimately remain up to budget holders to decide how to spend the money. There is no way around that, however much power is delegated to beneficiaries. But the irony at the heart of the increasing tendency to control aid spending centrally is that while it is supposed to ensure and increase value for money, it may be doing just the opposite.