To create better resilience and response to disasters, international organisations must ensure their efforts are designed around and work with local communities 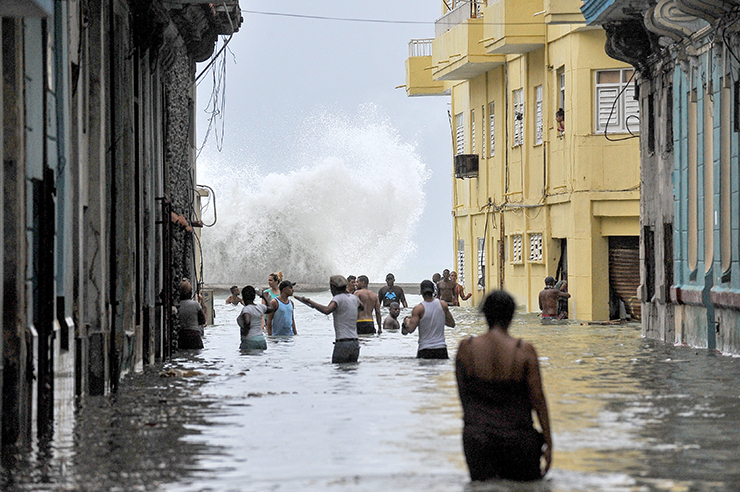 Havana, Cuba in the aftermath of Hurricane Irma, which left a trail of devastation through the Caribbean to Florida. © Yamil Lage/AFP/Getty Images

To create better resilience and response to disasters, international organisations must ensure their efforts are designed around and work with local communities

In 2017, major disasters were seldom out of the headlines. The US experienced as many billion-dollar disasters as in any other year, tying with 2011 for the most ever. When we think about how we might anticipate disasters in the Americas (including the Caribbean), we need to think about three distinct types:

1. Permanent/chronic disasters
These disasters correlate to high levels of vulnerability in particular countries. This can be due to a variety of interrelated factors, such as inequitable distribution of resources, lack of (or weak) social welfare at community level, or drug and gang-related violence.

The Americas region receives almost a third of the world’s migrants – including people from Africa, the Middle East and Asia. This puts enormous pressure on both local and national systems across the Americas, in countries that are often not equipped to deal with their own internal pressures. To compound this, migrants and internally displaced people often face exclusion or stigma – a fact that is often conveniently ignored by the rest of the world.

2. Recurrent/seasonal disasters
These disasters are caused by extremes of climate – both hot and cold. We are seeing more intense floods during normal rainy seasons, such as those experienced in Peru in March 2017. At the other extreme, unusually long dry seasons in Central America are provoking serious droughts, while the risk of forest fires in North America is on the rise. Meanwhile, the Caribbean cyclone season is generating a far greater than typical number of storms. In just a one month period in August–September 2017, seven named storms were registered – five of them at category three or above.

3. Emerging/surging disasters
These disasters relate to sudden emergencies such as earthquakes (there were six measuring 6.0 or more on the Richter scale in the Americas during 2017, three of them in Mexico in September) and outbreaks of disease (such as Zika and yellow fever in 2017). These are the disasters for which we focus our disaster preparedness and mitigation, through the establishment of early-warning systems and contingency plans. But the level of anticipation will always be limited.

Given the increasing frequency of these destructive phenomena, what are the implications for disaster risk reduction?

First, there is the issue of how to meet short- and medium-term needs, using vertical or horizontal intervention approaches. The vertical approach is linked to meeting the interests of donors and the foreign policy objectives of governments, with a strategic focus on creating new opportunities for business or enhancing services and/or products provision. This approach is very rigid and strict.

Finding a way to successfully combine these two approaches is the permanent dilemma of development actors. A strategy adopted by the Red Cross is its ‘One Billion Coalition for Resilience’. This initiative, designed to scale up community and civic action on building resilience, will help to streamline community-based programmes, developing feasible and flexible solutions.

The interplay between global and local action within disaster management and response strategies also generates much debate. Resources for providing help when disasters occur are often available at the global level, and are generated and distributed through complex international structures. Yet these global systems often run counter to the local programmes working at the ‘coal face’ of disaster recovery.

The IFRC is therefore developing and strengthening the leadership of our national societies – the Red Cross members in each country – both locally and nationally. We are focusing on: risk management and governance; good administration and finance; creation of sufficient voluntary networks at the local, national and regional levels; and stronger inclusion of communities and community leaders. An open, gender-based approach provides empowerment in all the activities we implement.

We will use an information management system to identify the needs and capacities of each territory, when it comes to social, health, food security, shelter and, above all, generating subsistence. The Red Cross offers many tools that can be used in conjunction with local systems in support of this agenda: our aim is to be an institution that plays a neutral but unifying role.

Finally, it is important to create a much stronger way of managing resources that would allows us to create affordable, practical and expandable solutions in the region. We strongly believe that the integration of international actors such as the Red Cross and Red Crescent – an international movement with a presence in 190 countries, 85 million followers and 17 million volunteers – will help to generate waves of positive influence. We want to see good practice replicated throughout the world, adapted to each of the contexts of the regions and territories.

If we want to achieve the Sustainable Development Goals (SDGs), we must concentrate our efforts on addressing institutional and thematic gaps. IFRC is committed – in both the Americas and the wider world – to:

Red Cross interventions are based on positive, concrete actions that generate a real impact in the community. This is how we want to prepare for the worst: knowing what might happen, preventing disasters, dealing with them effectively and generating innovative processes to improve future recovery work. Ultimately, preparing for disasters requires simple and practical knowledge at the community level and systems that are inclusive.